The late Eddie Van Halen will have a new range of nine guitars made in his honour by the company he helped found and name, EVH.

The reimagined 5150 series, set to be released in early 2021, comprises guitars that have been designed for speed and comfort, supporting Van Halen’s signature “tapping” technique. They’ll arrive in a bright set of colours, including neon pink, and at a range of prices.

In a statement announcing the new guitars, EVH spoke of Van Halen’s influence: “The industry saw record guitar-playing interest in 2020 but also sadly said goodbye to one of the most innovative and influential players of its time.

“Eddie Van Halen’s singularly inventive style inspired an entire generation of players. He innovated not only in how he played but what he played and what he played through by creating some of the greatest guitars and amps the world has seen and heard.”

The nine guitars have Stratocaster-style basswood bodies with a deeper upper body curve, featuring specifications made by Van Halen himself: bolt-on quarter-sawn carved maple necks, and a 12- to 16-inch compound radius fingerboard with 22 jumbo frets. All are powered by direct-mount EVH Wolfgang bridge and neck humbucking pickups. 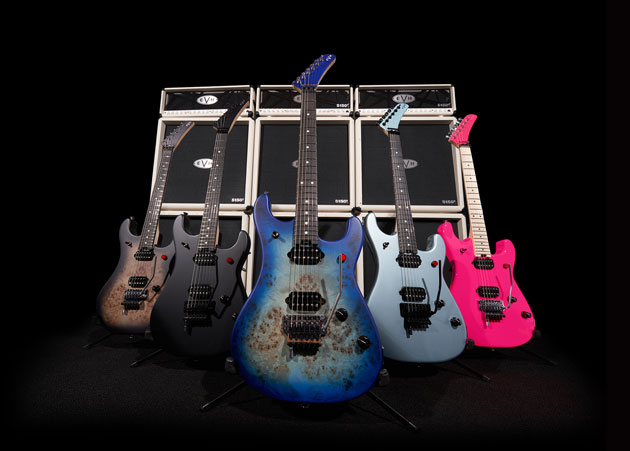 The new 5150 range of EVH guitars, made in the rock icon’s honour. Photo credit: EVH / Eddie Van Halen via @evhgear on Twitter.

Two Wolfgang Special guitar models and four Wolf WG Standard variants will also be released as part of the 2021 EVH range. The former pair of guitars are similar to the 5150 range, excepting a direct-mount EVH Wolfgang Alnico 2 bridge and neck humbucking pickups. The WG Standard variants are entry-level models, and will feature a baked maple neck and fingerboard with standard EVH Wolfgang humbuckers.

Van Halen died on October 6, 2020, at the age of 65, following a long battle with cancer. Last month, the rock icon’s death certificate was obtained by TMZ, citing his immediate cause of death as a cerebrovascular accident, or a stroke. He also had several underlying causes, including pneumonia, the bone marrow disorder myelodysplastic syndrome and lung cancer.

Lana Del Rey elaborates on album art controversy: “I got a lot of issues but inclusivity ain’t one of them”