Demi Lovato has relived the overdose that nearly claimed her life in the video for Dancing with the Devil.

The 28-year-old had three strokes and suffered brain damage after a near-fatal heroin overdose in 2018, and she discusses the events leading up to the incident in her new song.

The accompanying video charts Demi’s journey from the club to hospital, as enjoying a few drinks on a night out turned into drug-taking.

Demi is found unconscious in bed and winds up in hospital, where she is connected to numerous machines and tubes and surrounded by three distraught women – believed to represent her mother Dianna De La Garza and two sisters Dallas and Madison.

The make-up and hair sported by Demi in the video is true to her style at the time of her overdose, and the green jacket she wears is even similar to the one she wore the night she nearly died.

Newsreaders can be heard at one point reading out headlines about the overdose. 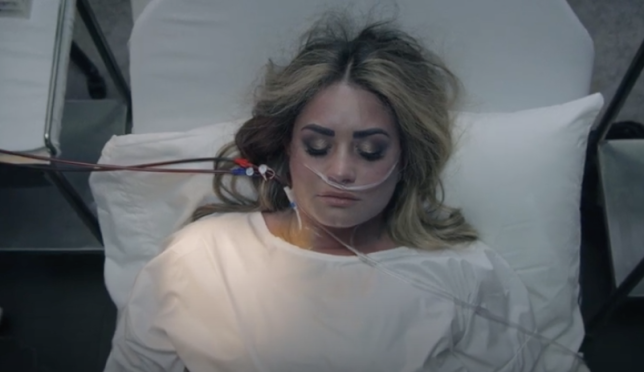 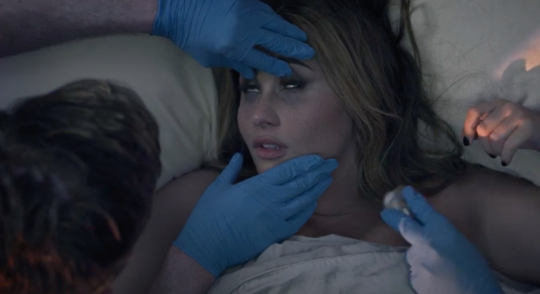 At the end of the video, a nurse giving Demi a sponge bath wipes her tattoo reading ‘survivor’, and the popstar gets out of her hospital bed, with the camera panning to a disco ball.

In her documentary series, also called Dancing with the Devil, the Sorry Not Sorry singer detailed the night that she started drinking and taking drugs again, six years into her sobriety.

She said: ‘I picked up a bottle of red wine [one] night, and it wasn’t even 30 minutes before I called someone that had drugs on them. I’m surprised that I didn’t OD that night.

‘I ended up at a party and ran into my old drug dealer from six years before. That night I did drugs I had never done before.’ 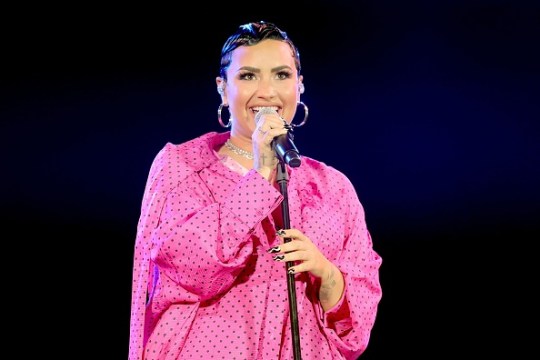 Demi said that on that night, she mixed meth, molly, weed, alcohol and oxycontin, saying: ‘That alone should’ve killed me.’

She was later introduced to heroin and crack cocaine and became addicted, and in July 2018, she called her drug dealer over to her house at 5.30am after celebrating a friend’s birthday.

Her personal assistant found her unresponsive the next morning and Demi was rushed to hospital, where at one point, she had ‘five to 10’ minutes to live.

Speaking about the overdose, the former Disney star said: ‘I had three strokes. I had a heart attack. I suffered brain damage from the strokes. I can’t drive anymore. I have blind spots in my vision. When I pour a glass of water, I’ll totally miss the cup because I can’t see it anymore.

‘I’ve also had pneumonia because I asphyxiated and multiple organ failure. I’m really lucky to be alive.’

Demi now describes herself as ‘California sober’, saying that she still sometimes drinks and smokes marijuana, but insists she is off hard drugs.