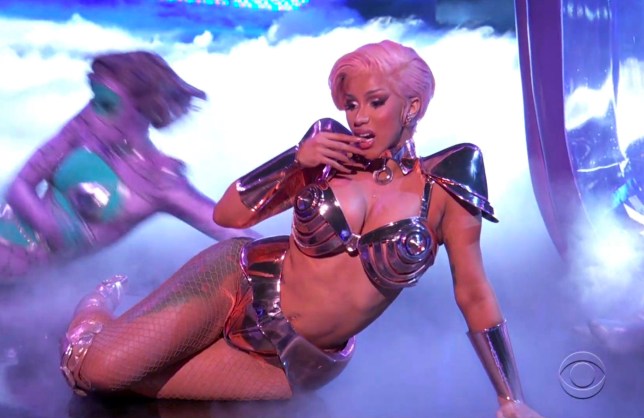 Cardi B is tired of having to defend WAP but found the energy to hit back at critics who are claiming the song is ‘hurtful’ to children.

The rapper performed the chart-topping single at the Grammy Awards with Megan Thee Stallion for the first time ever on Sunday.

Since its release last summer, WAP – which stands for Wet A*s P***y – has caused a stir with it sexualised lyrics and equally race music video.

So, it’s no surprise that the critics have come out in force to slam Cardi and Megan’s performance at the Grammys.

One person also condemned the track on Twitter and wrote: ‘The lyrics to ‘Wet A*s P***y’ are more welcome in some schools than Dr. Seuss books… just let that sink in for a minute.’

It was in reference to the recent Dr Seuss scandal in which it was announced that six of the children’s books would no longer be published after featuring racist imagery.

Cardi, 28, responded to the comment: ‘When has a school made kids read the lyrics to wap? I get it wap might be a lil vulgar but stop comparing a sensual song to books that has racist content! How can ya not tell the difference?I see that common sense aint that common.

‘By the way Dr Seuss publishing company made the decisions to remove those books on their own .Black people are not the one telling these companies to do things that they think Is “progressive” black only ask for equal justice [sic].’

She added: ‘Conservatives been making viral tweets comparing WAP to the banning of some of Dr Seuss books as if there’s any correlations between the two ….Well I can definitely tell some of ya only read dr Seuss books cause ya mind lacks comprehension.’ 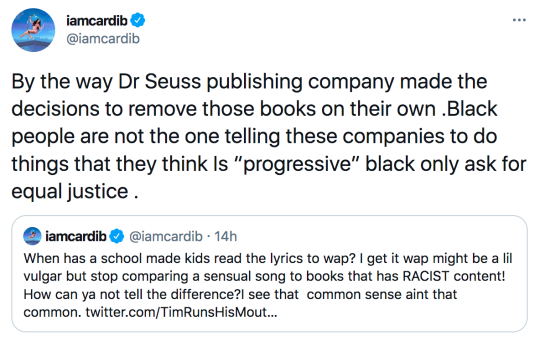 Cardi B wasn’t here for the comparison to Dr Seuss (Picture: @iamcardib, Twitter) 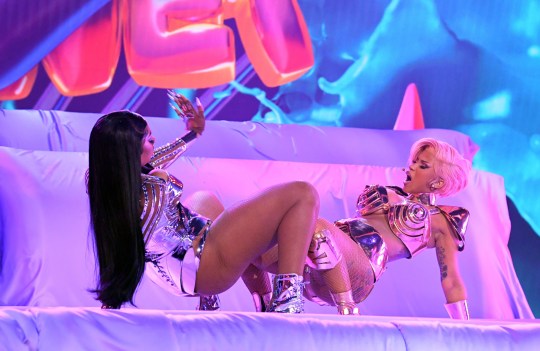 The organisation said: ‘The CBS Grammys broadcast contributed to the sexual exploitation of women by glamourising prostitution and stripping.

‘The performance by Cardi B and Megan Thee Stallion showed the two women and backup performers wearing thongs and lingerie, dancing on a stripper pole, and crawling around and twerking on a bed together.

‘In a performance that could have been cut from a hardcore pornography film, CBS allowed a glamourisation of stripping and prostitution to be broadcast in front of a national audience — a portion of which were children — for no other reason than for TV ratings.’

Despite the backlash, WAP’s success is in the pudding as it reached number one on both the UK and US Billboard Hot 100 charts last year.