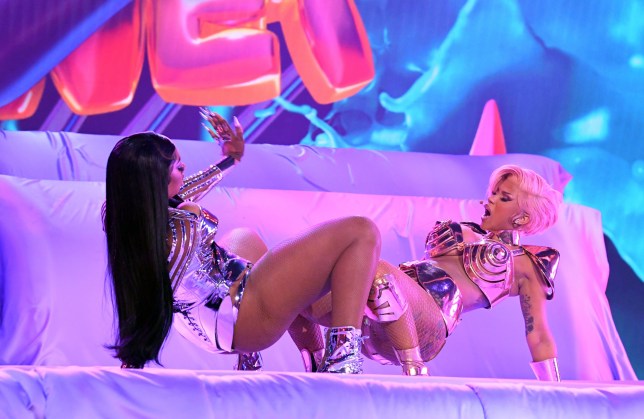 Cardi B got into another heated clash with Candace Owens over her controversial song WAP, which has been accused of ‘poisoning young Black girls’ minds’.

The 28-year-old rapper performed WAP – which stands for Wet A*s P***y – at the Grammy Awards on Sunday alongside Megan Thee Stallion for the first time.

It reignited criticism previously levied at the sexualised song, which sees Cardi and Megan explicitly talk about being pleasured by their men.

Candace, 31, has been particularly outspoken against WAP and slammed the Grammys performance on Tucker Carlson Tonight. Cardi saw a clip of her interview circulating on Twitter and commented: ‘Yaaaayyyyyyy we made Fox News guys !!! Wap wap wap.

‘Matter fact I’m just going to thank Candy. She put my performance on Fox News giving it more views that boosted the views on YouTube and is counting towards my streams and sales. Stream Up and WAP. Remember grown parents only you can monitor what your kids watch no1 else.’

She added alongside a meme saying ‘I love it’: ‘Me when the Republicans and conservatives have Temper tantrums cause of WAP every month.

‘Wow .Imagine if wap caused the downfall of the American empire and not North Korea bomb threats , terrorism, racism or bad government? !! That would be so iconic !!!’

Wow .Imagine if wap caused the downfall of the American empire and not North Korea bomb threats , terrorism, racism or bad government? !! THAT WOULD BE SO ICONIC !!! STREAM UP / WAP https://t.co/raiJhaw9JU

Just @ me next time, directly.

You are a cancer cell to culture. Young black girls are having their minds poisoned by what you are trying to package and sell to them as âempowermentâ.

Iâm one of the few that has courage to tell you the truth.

You should thank me. https://t.co/qvYriScfWm

Candace shot back: ‘Just @ me next time, directly. You are a cancer cell to culture. Young black girls are having their minds poisoned by what you are trying to package and sell to them as “empowerment”. I’m one of the few that has courage to tell you the truth. You should thank me.’

Candace, an outspoken supporter of the Republican Party, argued that Cardi is ‘in a position to empower young women to aspire to something more than taking off their clothes but you don’t feel you can be more’.

She added: ‘I take issue with you being used to encourage young women to strip themselves of dignity. Men typically treat women how they treat themselves. You know that…

‘What you did at the Grammys was disgusting.’

After branding Cardi as ‘insecure’, Candace continued: ‘You are a part of a larger cancer that is manifesting in black culture. There’s no person in America who can look you in the face and honestly say they wish they’re daughters turned out like you.’

The Grammy-winning rapper challenged: ‘And black women should be more like you? After all the fighting for equality and freedom they should be submissive to a white a man after years of abuse & rape making them a sandwich while pregnant cause in your words “ that’s what a woman should do”? Interesting.’

Cardi then retweeted old tweets of Candace seemingly endorsing her but the political pundit responded: ‘Millions of young girls follow you. At your best, you are self-deprecating and humorous. At your worst, you are naked, shoving your vagina into another woman’s vagina while thrusting atop her.

‘You were at your worst on the Grammy stage. Do better @iamcardib.’

The pair are now threatening to sue each other over tweets which Candace insists were photoshopped.

Prior to their clash, Cardi defended her Grammys performance after TV host Carlson said it was ‘hurtful’ to children.

WAP was released last summer and topped the charts in both the UK and on the US’ Billboard Hot 100.