Can the UK really win Eurovision or are we setting ourselves up for disappointment?

Let’s take a breath and weigh up the evidence (Picture: REUTERS/Yara Nardi REFILE)

If you’re a casual Eurovision fan who dips in on the night but doesn’t really pay much attention to the build-up, I have some shocking news for you.

Are you sitting down? Brace yourself: the United Kingdom is among the frontrunners.

Truly, some of us thought this day would never come. We feared the ignorant bore-lords who come out of the woodwork every year to say it’s ‘all a waste of license fee money’ would win; and we’d pull out altogether before we had this level of hype again.

But something has shifted. We’re riding high with the bookies, we’re generating excitement across the continent, and – here at home – our song is receiving airplay not just on BBC Radio 2, but on Radio 1 as well.

That song, if you haven’t heard, is Space Man; a rousing, shout-a-long, lighters-in-the-air anthem by TikTok sensation Sam Ryder.

Ever since the tune was confirmed as our entry back in March, fans have been drooling over the very real possibility of us finishing on the left-hand side of the scoreboard – something we haven’t done since Blue came 11th with I Can back in 2011, more than a decade ago.

Over the weekend, bookies made Space Man the second favourite to win; and now there’s a genuine electricity in the air among British Eurovision fans as we feel a growing sense that we’re in with a serious, tangible shot at winning the trophy.

Some of us have even been gossiping about where in the UK the 2023 contest could be held, and who would host it (I vote Clara Amfo, Matt Edmondson and Mollie King. Or drag queens).

But do we seriously have a chance of challenging for first prize? Or are we so enthralled by the idea of not being dead-last for once that we’re getting a bit carried away; overhyping poor Sam to the point where anything less than Top 3 will feel like an anticlimax?

Let’s take a breath and weigh up the evidence.

Crucially, a big plus for us is that this time around we seem to genuinely have a song, a singer and a creative team who are firing on all cylinders.

No matter what people might tell you about how we only do badly because ‘everyone hates us’, the bottom line is we never stand a chance if our entry simply isn’t up to scratch – and for the last God-knows-how-long, it hasn’t been. 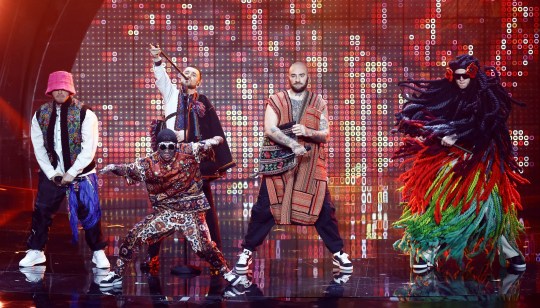 Kalush Orchestra from Ukraine perform during the first semi-final of the 2022 Eurovision Song Contest (Picture: REUTERS)

Last year, James Newman’s likeable earworm Embers was let down by poor staging and a hesitant performance; in 2019, the talented Michael Rice was saddled with a song that wouldn’t even make a decent X Factor winner’s single; and though SuRie put in a great shift with Storm in 2018, the gentle track just couldn’t keep pace with the attention-grabbing frontrunners elsewhere.

Lucie Jones’ flawless vocals took us to a comparatively thrilling 15th place in 2017, but how much better might she have done with a slightly more contemporary-sounding song than Never Give Up On You? Don’t even get me started on the whole Electro Velvet debacle.

Cut to 2022, and with Space Man, Sam Ryder and his team might just be ticking all four of the key boxes: good ‘relevant’ song, good technical singer, a performance that connects with the viewers, and – if those sneaky peeks at rehearsals are anything to go by – impressive staging.

And the man’s already a big star – just take a look at his online credentials. In 2021, long before he was announced for the Song Contest, he was already the UK artist with the most followers on TikTok; ahead of Ed Sheeran, Dua Lipa and Anne-Marie. Now, he has 12.4million followers to Sheeran’s 11million.

Add that to his 3.7million Instagram followers, almost 1.2million monthly Spotify listeners and 43million views on his YouTube channel; it’s clear we have a man who knows how to excite and engage an audience.

What’s more, there are those tantalising betting odds. He’s currently in third with most bookmakers; and at time of writing, many have priced him at 7/1 – behind only the Italian hosts and long-standing odds-on frontrunners Ukraine.

Don’t forget, he’s given us our most exciting build-up campaign for over a decade

For comparison, according to EurovisionWorld.com we went into the final of the 2021 contest with a bookies’ ranking of 24th place out of 26 countries.

Still, we’re not home and dry: odds are just odds, they’re not guarantees.

Last year, Malta’s Destiny went into the final as the second favourite but ended up finishing 7th when her brilliant jury score (third place) was undermined by tepid support in the televote (14th). Lest we forget that even the UK’s dire bookies’ ranking (24th) ended up being too optimistic: we actually came last.

Plus, we shouldn’t ignore the fact that our odds have drifted a bit in the last couple of days: being third favourite is fantastic, but we were actually second over the weekend.

While Top 3 would obviously be phenomenal (and realistically a Ukraine win seems ever more likely), it is a little unnerving to see a sign of momentum going in the wrong direction with a few days still to go.

What’s also worth pointing out is that Space Man has not been among the top-performing Eurovision 2022 contenders on Spotify – and when the Twitter account @esc_charts posts daily about the Top 7 most-listened-to songs on the streaming platform, we are consistently nowhere to be seen (though it’s likely not far off – in an end-of-week round-up over the weekend, that same account reported that Sam ranked 8th).

We are also one of the only countries in Europe to not send our own song into our domestic Spotify Charts just yet; and it was only two days ago, on Monday, when Iceland became the first country in the world to put us in theirs.

In contrast, Italy’s Brividi by Mahmood and Blanco has so far graced at least 15 nations’ daily Spotify rankings at one point or another.

Still, a strong performance on streaming obviously doesn’t guarantee lots of points on the night – just look at poor Austrian entrants DJ Lumix and Pia Maria, whose song Halo is comfortably among the most-listened-to tracks of this year’s crop but failed to even qualify from last night’s Semi-Final.

Conversely, the Moldovan entry Trenulețul is one of the least-streamed Eurovision songs of the year and did qualify.

So really, when you weigh it all up, we have lots of reasons to be extremely excited, but a few caveats to stop ourselves getting too carried away.

Ultimately, it seems very unlikely (touch wood) that we’ll be at the very bottom of the scoreboard, and that’s a feat in itself. And if Sam even finishes in the Top 10, he’ll be the first male UK soloist to manage it since Michael Ball 30 (!) years ago.

Besides, as cliché as it sounds, in one vital way he’s already won: he’s restored British Eurovision fans’ faith in our own prospects, and reminded us (not to mention creative teams, record labels, and people who write the cheques) that when things are done right, we can make serious waves.

He himself told ESC Extra just days ago: ‘I really think the attitude is changing [in the UK] and becoming more positive to Eurovision. Almost becoming way more exciting too.

‘The bar is going to be lifted year on year on year and I would love to see a plethora of the amazing talent in the UK coming forward and beating down the door to being involved in Eurovision – how cool would that be? And I think it’s going to happen.’

I think it will too.

So while I’ve got everything crossed that he’ll be hovering towards the top end of the scoreboard on Saturday night, I’m not getting so carried away that it’ll be devastating if he isn’t.

Don’t forget, he’s given us our most exciting build-up campaign for over a decade. That’s already put my enthusiasm up in space, man.