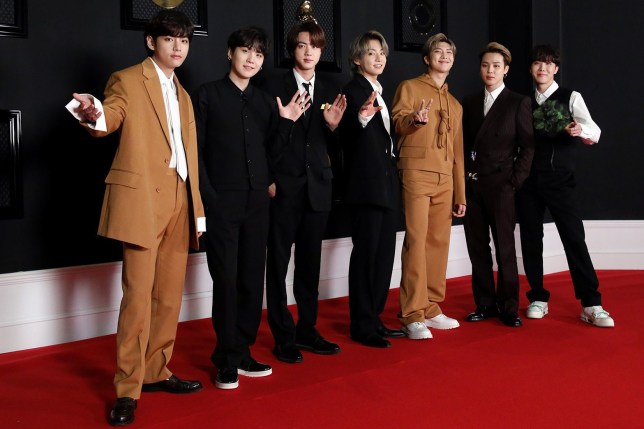 BTS said they have been mocked for their looks (Picture: Big Hit Entertainment)

BTS have shared their own experiences of racism and discrimination as they spoke out against anti-Asian racism.

The Korean band – made up of RM, J-Hope, Jimin, Suga, V, Jungkook and Jin – issued a statement on their official channel in both Korean and English condemning the recent uptick in anti-Asian racism in the United States.

BTS wrote: ‘We send our deepest condolences to those who have lost their loved ones. We feel grief and anger.

‘We recall moments when we faced discrimination as Asians. We have endured expletives without reason and were mocked for the way we look. We were even asked why Asians spoke in English.

‘We cannot put into words the pain of becoming the subject of hatred and violence for such a reason. Our own experience are inconsequential compared to the events that have occurred over the past few weeks. But these experiences were enough to make us feel powerless and chip away our self-esteem.

‘What is happening right now cannot be dissociated from our identity as Asians. It required considerable time for us to discuss this carefully and we contemplated deeply on how we should voice our message.

‘But what our voice must convey is clear.

‘We stand against racial discrimination. We condemn violence. You, I and we all have the right to be respected. We will stand together.’

Over the past few years, BTS have become the biggest boyband in the world, topping single and album charts in the US and even being nominated for a Grammy.

However, they have been subjected to racist comments on social media and earlier this year, a German radio host apologised after comparing BTS to the Covid-19 virus. 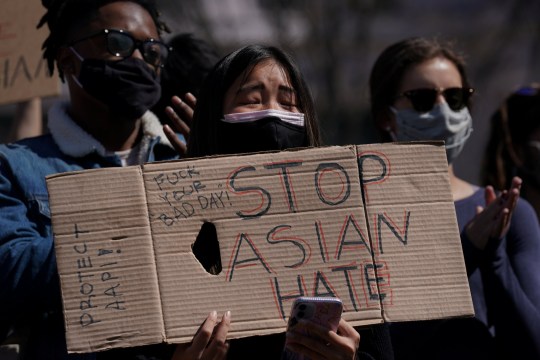 There has been an uptick of anti-Asian racism in the US (Picture: REUTERS/Erin Scott)

While BTS didn’t mention a specific incident in their statement, it came after a shooting outside Atlanta on March 16, when a gunman killed eight people, including six Asian women, at three Asian massage parlours.

BTS have often used their platform to denounce racism and discrimination, and last year, the band and their agency Big Hit Entertainment donated $1million (£726,000) to Black Lives Matter following the death of George Floyd and the resulting worldwide protests.

The group’s fans, called ARMYs, then matched the donation.