Billie Eilish has invited the cameras into her life for the first time in her new Apple TV+ documentary.

The bad guys singer has released the trailer for her film, Billie Eilish: The World’s A Little Blurry, which will offer a behind-the-scenes look as she tours the world, records her debut album When We All Fall Asleep, Where Do We Go? and comes to terms with her rise to stardom.

The trailer opens with Billie and her brother Finneas Baird O’Connell joking around in their makeshift home studio – his bedroom. Billie takes out her Invisalign and prepares to record music for her critically acclaimed first album.

In one clip, Billie reveals: ‘This is my parents’ bed and I sleep in here because of monsters.’

Her mother, Maggie Baird, makes an appearance and shares what it’s like getting a first-hand look at the showbiz industry.

‘I honestly don’t know how any artist of any age is doing it without a parent,’ she admits.

Maggie later says: ‘It is a horrible time to be a teenager. Kids are depressed.’ 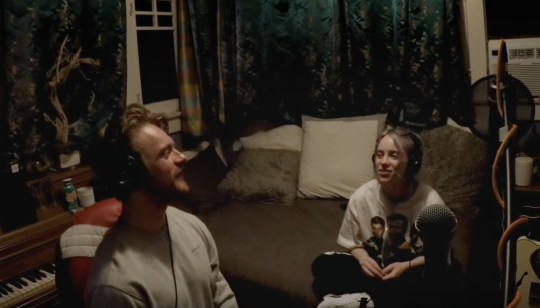 Billie, 19, agrees: ‘I look into the crowd and I see every single person is going through something and I have the same problem. I was like, why don’t I turn this into art instead of living with it.’

Her father, Patrick O’Connell, weighs in: ‘You have to have faith, you have to do your best with your best life. Because what else?’

Viewers are treated to a glimpse at Billie’s life on the road and meeting her fans backstage.

The Apple TV+ synopsis of the film reads: ‘Billie Eilish: The World’s A Little Blurry tells the true coming-of-age story of the singer-songwriter and her rise to global superstardom.

‘From award-winning filmmaker R.J. Cutler, the film offers a deeply intimate look at this extraordinary teenager’s journey, at just 17 years old, navigating life on the road, on stage, and at home with her family, while writing, recording and releasing her debut album “When We All Fall Asleep, Where Do We Go?”’

Billie Eilish: The World’s A Little Blurry is set to debut on Apple TV+ on February 26.