‘Welcome to Ireland’, says Christopher Walken in the opening voice-over of the truly laughable Wild Mountain Thyme. Then he says Ireland about a dozen more times, just in case you forget where you are. And, to be fair, his accent means that you might.

The best you can say for the actor’s attempted brogue is that it sounds like a drunken Irish fella doing a passable impression of Christopher Walken. But really that’s par for the course with this movie – a fever dream of awfulness that feels more like a delusion born of a year-long lockdown than an actual big screen romcom.

Writer-director John Patrick Shanley, adapting his own play Outside Mullingar, introduces neighbouring farms owned by the Reilly and Muldoon families. Walken is curmudgeonly patriarch Tony Reilly, who has caused a stir with his desire to offload the farm to his American nephew (Jon Hamm) rather than pass it on to his son Anthony (Jamie Dornan). Anthony, meanwhile, is grappling with his lifelong romantic affection for Rosemary Muldoon (Emily Blunt).

The movie is an unwieldy, comically over-written beast in which every character speaks as if they’ve swallowed a brochure from the Irish tourist board. It’s a script thick with syrupy platitudes, exacerbated by a musical score that erupts into a deafening, sickly crescendo whenever anyone says the word ‘fields’.

It would be wrong to criticise Wild Mountain Thyme for struggling to maintain a tone because the atmosphere is certainly consistent.

The feel, though, is one of idiosyncratic bewilderment rather than anything recognisable as reality. It’s a tone all of its own into which Shanley attempts to crowbar knowing melodrama, broad comedy and at least one scene in which someone waves a metal detector at a horse. 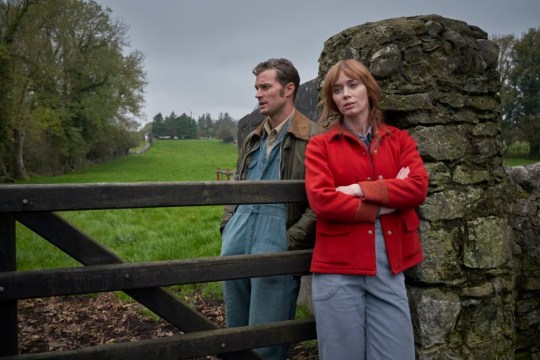 To watch this movie is to enter a sort of fugue state – a cinematic sleep paralysis in which it’s impossible to look away from every head-scratching moment.

Neither Dornan or Blunt is able to inject a single dose of humanity into their characters, with both excellent performers struggling to escape from the holes they’re dug into by the dreadful accents and nonsensical dialogue. 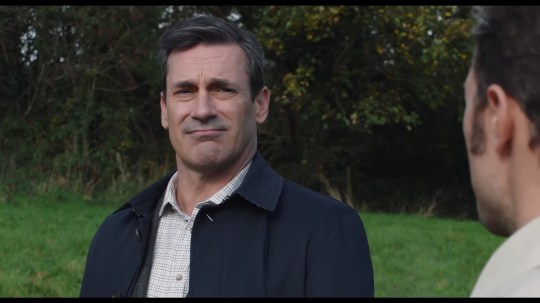 This was our face as we watched the film (Picture: Lionsgate)

Only in a brief scene in which Blunt sings the title song in front of a quietly tearful Walken does Shanley get out of his own way for long enough to allow some bona fide emotion to seep through. Within minutes, though, they’re prattling on about stew again as they debate the fate of a strip of land between the two farms, separated by a series of awkward gates. This land is massively important to both families, but the reason for that tension is never quite clear.

Indeed, for most of its running time, the film just seems to amble and dodder around the pretty countryside of County Mayo – lensed with sun-dappled reverence by cinematographer Stephen Goldblatt – without saying anything of note.

The central romantic story thread is deeply baffling, as there’s seemingly not a single obstacle to the clearly pre-destined relationship between Rosemary and Anthony – the area’s only attractive young singletons. The addition of Jon Hamm’s suave Stateside charmer also makes very little sense, particularly as he spends the entire third act just chilling on an aeroplane.

But none of this matters, because Wild Mountain Thyme delivers a final knockout blow with its climactic twist – a buried secret so preposterous that you wouldn’t even believe it if I revealed it here.

The film doesn’t so much jump the shark as bid farewell to Earth altogether, vaulting through the stratosphere and into cloud cuckoo land. But perhaps that’s the unique genius of the film. It’s a plot twist so mind-bendingly absurd that you can argue it’s a metaphor for just about anything.

With a vision of Ireland so laughably cartoonish you can feel the leprechauns bouncing around just out of shot, this might just be the Emerald Isle’s answer to The Room.

One thing’s definitely true, though – once seen, this movie is impossible to forget. To be sure, to be sure.

Wild Mountain Thyme is out today.

Who are John and Anne Darwin’s children Mark and Anthony?