Timothee Chalamet has shared the first look of himself as the iconic Willy Wonka from the upcoming prequel and it looks like he was born for the role.

The Call Me By Your Name actor casually blessed our timelines with an official photo of himself donning Wonka’s classic purple velvet coat and a brown top hat with snowflakes falling around him as he stares intently into the distance.

‘The suspense is terrible, I hope it will last … ?WONKA?,’ he cheekily captioned the snap, quoting Wonka’s classic line from the 1971 instalment Willy Wonka & The Chocolate Factory.

Timothee, 25, has big shoes to fill with the late Gene Wilder first playing the iconic character in the 1971 movie, while Johnny Depp took on the role in 2005.

Wonka will serve as a prequel to Roald Dahl’s 1964 children’s book Charlie and the Chocolate Factory.

Paul King, known for helming Paddington, is directing the blockbuster while Simon Rich is writing the script and David Heyman producing.

It was announced in May that Timothee had been cast in the titular role, exploring the young inventor’s life before he opened his world-renowned chocolate factory or ever met Charlie Bucket. 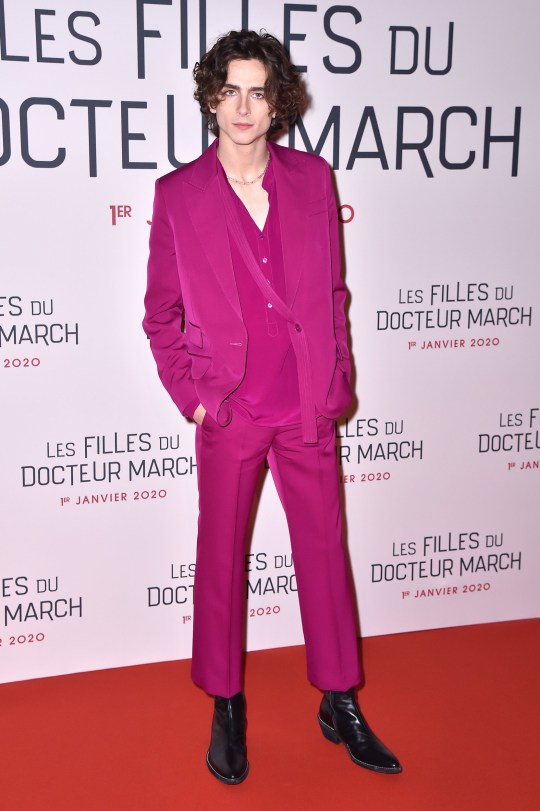 Timothee has been the top choice for some time for the part (Picture: Dominique Charriau/WireImage)

Deadline reported at the time that this Willy Wonka prequel is set to be a musical treatment once more like the 1971 classic, so Timothée will be showing off his musical talents to the world for the first time.

The film is a co-production between Warner Bros – its third adaptation of the story, having also been responsible for Tim Burton’s 2005 take with Depp – and The Roald Dahl Story Co., so it should be set to follow more in the spirit of Dahl’s original characters than in the 1970s.

Timothée had reportedly been top choice for the part for a while but scheduling conflicts – including the intense prep time needed for a musical – had been an issue.

It’s a busy year for the Oscar-nominated actor, as he’s playing the lead in Denis Villeneuve’s Dune adaptation and is part of a star-studded cast – including Adrien Brody, Tilda Swinton, Bill Murray and Frances McDormand – for Wes Anderson’s French Dispatch.

Royal who questioned colour of Meghan Markle’s son Archie was ‘just being realistic’ and not racist, John Barnes says

Tom Parker: When was The Wanted star diagnosed with a brain tumour?

Denzel Washington says ‘Equalizer 3’ is on its way