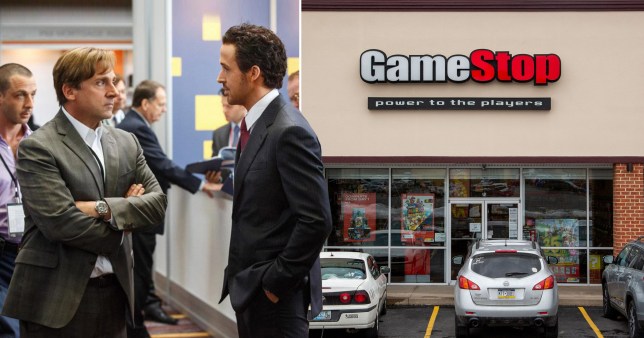 Viewers are flocking to watch the 2015 movie (Picture: Paramount/ Rex)

The battle between Wall Street hedge funds and Reddit users over GameStop stock has people flocking to rewatch The Big Short in a bid to understand the whole saga.

The 2015 movie, starring Christian Bale, Steve Carrell, Brad Pitt and Ryan Gosling, showed how the financial crisis of 2007 to 2008 was triggered by the United States housing bubble.

Christian starred as Michael Burry, a hedge fund manager, who aims to to bet against, or short, market-based mortgage-backed securities, for profit.

Elsewhere in the movie, which won an Academy Award for best adapted screenplay, Margot Robbie is seen explaining some particularly complex parts of the situation to viewers from her bathtub, with a glass of bubbly in hand.

Some fans are racing to rewatch the blockbuster in the hopes that it’ll help them understand the situation a bit better, while others have admitted it’s the only reason they’ve got a semblance of understanding of what’s going on.

‘I for one can’t wait for The Big Short 2: GameStop so Margot Robbie explains this whole thing to me in a bathtub,’ one wrote.

I for one canât wait for The Big Short 2: GameStop so Margot Robbie explains this whole thing to me in a bathtub

yâall wanna make fun of me for collecting so many DVDs but I found The Big Short for $5 recently and watched it 3 times last week so I actually sort of understood what was going on today pic.twitter.com/7oTQXwsxyR

with apologies to The Big Short, five seasons of Billions, and multiple episodes of Planet Money, today was the day i finally understood what “shorting” is

Another added: ‘Shout out to the movie “The Big Short” cause that might be the only reason this whole Game Stop thing makes sense to me.’

‘Y’all wanna make fun of me for collecting so many DVDs but I found The Big Short for $5 recently and watched it 3 times last week so I actually sort of understood what was going on today,’ a triumphant viewer said.

With one Twitter user conducting a poll to find out if others know how short-selling works, another simply answered: ‘I watched The Big Short and Margot Robbie in a bathtub explained it to me.’

Small investors have been organising on Reddit, causing the GameStop stock to skyrocket in value, with some aiming to cause as much financial damage as possible to large financial institutions – specifically short-sellers.

What is a stock ‘short’?

If an investor thinks that the future stock price of a company is going to decrease, they can opt for what’s called a ‘stock short’.

To short a stock, an investor will temporarily borrow some stocks from an existing stockholder with the promise they’ll give the stock back in the future.

The investor then sells the borrowed stock at the market price (which they think is inflated). If the stock goes down, the investor can then buy back the stock at a lower price, return the stock to the person they borrowed it from, and the investor will retain a profit.

However, a stock ‘short’ only works if the stock price decreases in value – which is why hedge funds and investors use it to bet against the future value of a company. If their assumption is wrong, and the stock price goes up, then they’ll lose money.

This is because they’ll be forced to buy back the stock at a higher price to give to the person they borrowed it from. Because a stock can technically rise to any value, losses stemming from a stock ‘short’ can be infinite – so it’s a risky strategy to take.

With speculation on sub-reddits like WallStreetBets suggesting GameStop’s value might increase, users began to realise they were moving the stock price upwards.

It caused the New York Stock Exchange to halt trading nine times, triggered a White House alert, and drew attention from regulators across the world.

This week, GameStop became the most traded stock on Earth, above Apple and Tesla, rising in value 1,550%.

The flurry of investment has so far proved costly for the big hedge funds and financiers.