Tom Holland has confirmed a casting rumour about Spider-Man 3 – just not the one we were expecting.

The 24-year-old is currently filming the sequel to 2017’s Spider-Man: Homecoming and 2019’s Far From Home in Atlanta, with the details about the movie’s plot under wraps – particularly that rumour that former Peter Parkers Tobey Maguire and Andrew Garfield will be making cameos.

However, Tom has spilled the beans on one big casting surprise.

The actor confirmed the news that two Hollands will star in Spider-Man 3, as his younger brother Harry is making a cameo.

Speaking on The Tonight Show with Jimmy Fallon, Tom said: ‘This is correct. He has a small cameo in Cherry, he plays a character called the shaker kid and he’s a drug dealer.

‘We kind of had this idea that in every film I would be in, Harry would reprise his role as the shaker kid. So he is back again in his own sort of, MCU Cinematic Universe as the ecstasy dealing shaker kid.’

Of course, being on the set of a blockbuster didn’t mean Harry, 22, could escape brotherly teasing.

Tom explained that his brother is webbed upside down in his cameo scene while he, as Spidey, argued with somebody on the ground, and he made the most of having his brother suspended upside down for as long as possible.

The Marvel star said: ‘I know how difficult that can be. So at the beginning of the day, I was making the takes extra, extra long, to see how long it would take before he passed out. Towards the end of the day, I really did start to get worried about him.

‘It’s a funny scene though, and it was really fun for me to share that moment with him. I’m sure my mum and dad will be very proud.’

Tom had previously teased Harry’s involvement in the film when he posted a picture in full Spider-Man costume, with his brother on his shoulders. 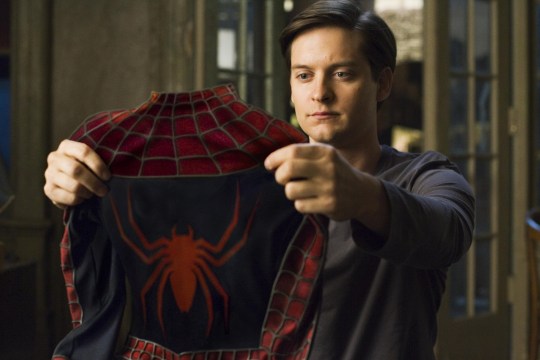 Tom wouldn’t confirm any rumours about the return of past Spider-Mans (Picture: Marvel/Sony Pictures/Kobal/REX)

Fans took that to mean that the fabled Spider-Man multiverse scenes were being filmed, after it was rumoured that not only would Tobey Maguire and Andrew Garfield be returning, but former MJs and Gwen Stacys like Kirsten Dunst and Emma Stone too.

Tom has previously denied the cameos, and continued to stay tight-lipped while speaking to Jimmy.

When asked if Tobey and Andrew were in the film, he said: ‘It would be amazing if they were, because they haven’t told me that yet and I am Spider-Man and I’ve read the script from the beginning to the end. So it ill be a miracle if they could have kept that from me. But at the moment, there is no cameo from the two boys.’

When it was pointed out that Marvel have kept details from him in the past, due to his tendency to excitedly overshare, Tom argued: ‘It actually is getting to the point where it’s really frustrating. I feel like now I’ve progressed, I’m a trustworthy member of the Avengers, and I haven’t really ever spoiled anything.

‘Well. There’s a few things, but no big things.’ 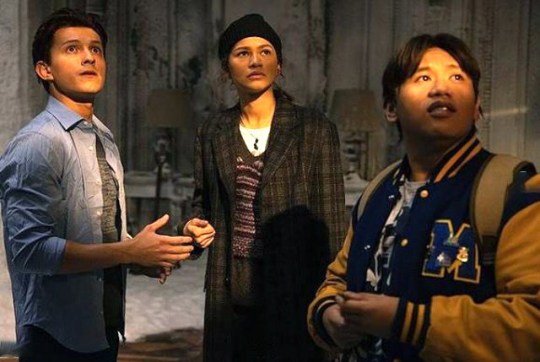 Spider-Man is scheduled for release later this year (Picture: Marvel)

The star did appear to share the film’s title last night, but it turns out he, along with co-star Zendaya, were just having us on, sharing titles like ‘Phone Home’ and ‘Homewrecker’.

We did, however, get our first still from the movie, showing Peter Parker, MJ (Zendaya) and Ned (Jacob Batalon) together.