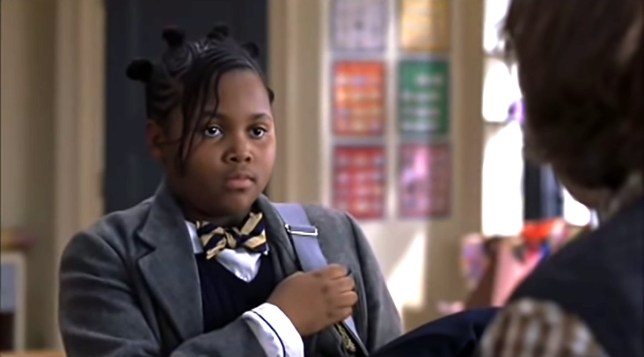 School of Rock didn’t just give us iconic bops and a change in how we pronounce ‘cello’ – it also delivered a message in body positivity.

A clip from the 2003 comedy has gone viral after a fan pointed out how ‘revolutionary’ Jack Black’s comments were.

In the movie, Black’s rocker-pretending-to-be-a-substitute-teacher Dewey Finn gives student Tamika (Maryam Hassan) a pep talk, as she fears the crowd will make fun of her ‘because I’m fat’.

Dewey, or Mr Schneebly, says: ‘You heard of Aretha Franklin, right? She’s a big lady, but when she starts singing, she blows people’s minds, everybody wants to party with Aretha.

‘You know who else has a weight issue? Me. But once I get up on stage, start doing my thing, people worship me. Because I’m sexy, and chubby, man.’

Tameka asks: ‘Why don’t you go on a diet?’ with Dewey saying: ‘Because I like to eat, is that such a crime?’

This scene is more revolutionary than I think they even knew and it really stuck with me as a child. Especially the last line. pic.twitter.com/KkhvGicjVZ

Writer Hamish Steele tweeted the clip and wrote: ‘This scene is more revolutionary than I think they even knew and it really stuck with me as a child. Especially the last line.’

He continued: ‘I see even well meaning people be like “you never know someone’s story… maybe they eat because of depression, or poverty, or genetics” and I’m like??? It’s also totally fine if they just like to eat a lot? It’s none of your business and fat people have value regardless?

‘Tbh love Jack Black!! 100%!! But this post was inspired by a bunch of nasty fatphobic comments. And whenever I see fatphobia I think of this scene and it makes me feel better. If you like Jack Black, shut the f*** up about people’s weight. It’s that simple.’

The tweet has gone viral, with over 70,000 retweets and 460,000 likes, and it caught the attention of Maryam, who is now a singer who performs under the name Mayhrenate.

As a child I didnât realize the fullll impact of the scene but it definitely hits different today. Glad to have played a part in such an important moment/scene ðâ¨ https://t.co/o4BpUChapj

She wrote: ‘As a child I didn’t realize the fullll impact of the scene but it definitely hits different today. Glad to have played a part in such an important moment/scene. (sic)’

Maryam, now 28, was only nine years old when she auditioned for School of Rock, and ended up having one of the most prominent children’s roles in the movie.

Speaking to Vulture, she said: ‘They were looking for an overweight singer around my age. I was a chubby little girl. Specifically, they needed someone who had range to sing Aretha Franklin and Patti LaBelle. I’m an old soul who grew up singing songs by those women.

‘So I went to the audition and there must have been, oh my gosh, 2,000 kids. There were way too many kids there. But I got in and out pretty quick and the casting people said that they loved me. They gave me a couple of lines to read, and they called a few hours later for a callback. By the next week, I landed the role.’

Maryam even managed to give the character a twist, suggesting that her name be Tamika rather than Laurie.

School of Rock – written by Mike White and directed by Richard Linklater – has become a cult classic since its release almost two decades ago, and was made into a Broadway and West End musical.