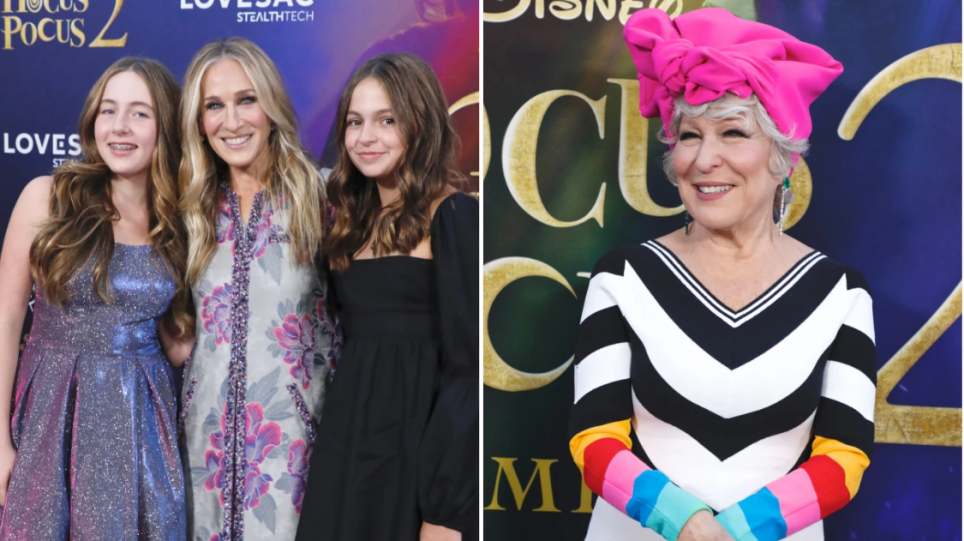 It was a family affair for the Hocus Pocus 2 premiere (Picture: Gregory Pace/Shutterstock)

The actresses are all returning to their roles for the sequel 29 years after the fist movie, which became a cult Disney classic over the years since its release.

With fans excited to see the child-hungry witches run amok in Salem once more, its stars were ready to put on a fashionable display at the event.

As befits a Disney movie, it was a family affair for Sex and the City actress Sarah Jessica Parker, who was accompanied by her husband Matthew Broderick, as well as their twin daughters, Tabitha and Marion, 13.

Sarah, 57, was elegant in a silver and purple outfit comprised of a long silk floral tunic and silky cropped trousers, paired with hot pink heels, while Matthew – no stranger to Disney himself as the voice of adult Simba in the original Lion King – matched her in a dark grey suit, which he pepped up with a patterned brown tie.

Tabitha and Marion reflected the magical vibe in sparkly purple and black dress choices, wearing their own versions of purple strappy heels. 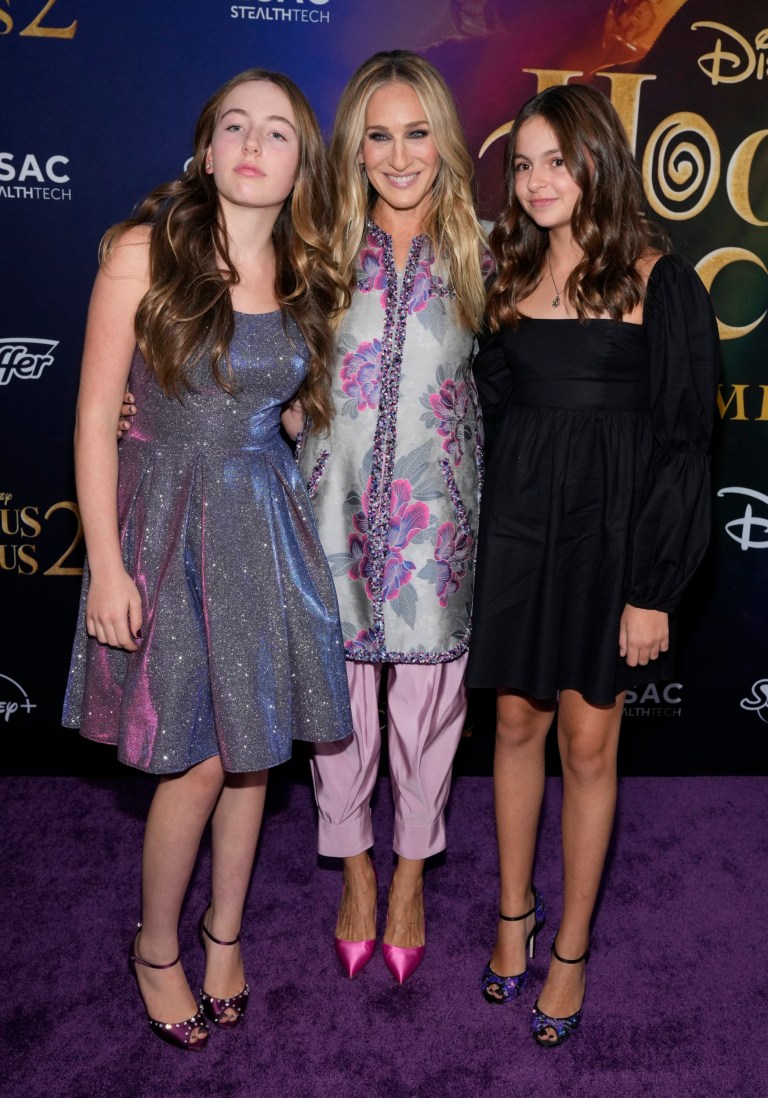 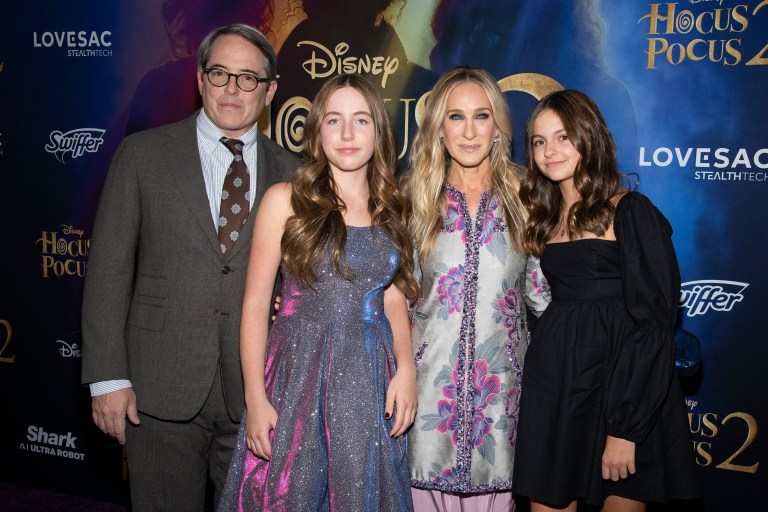 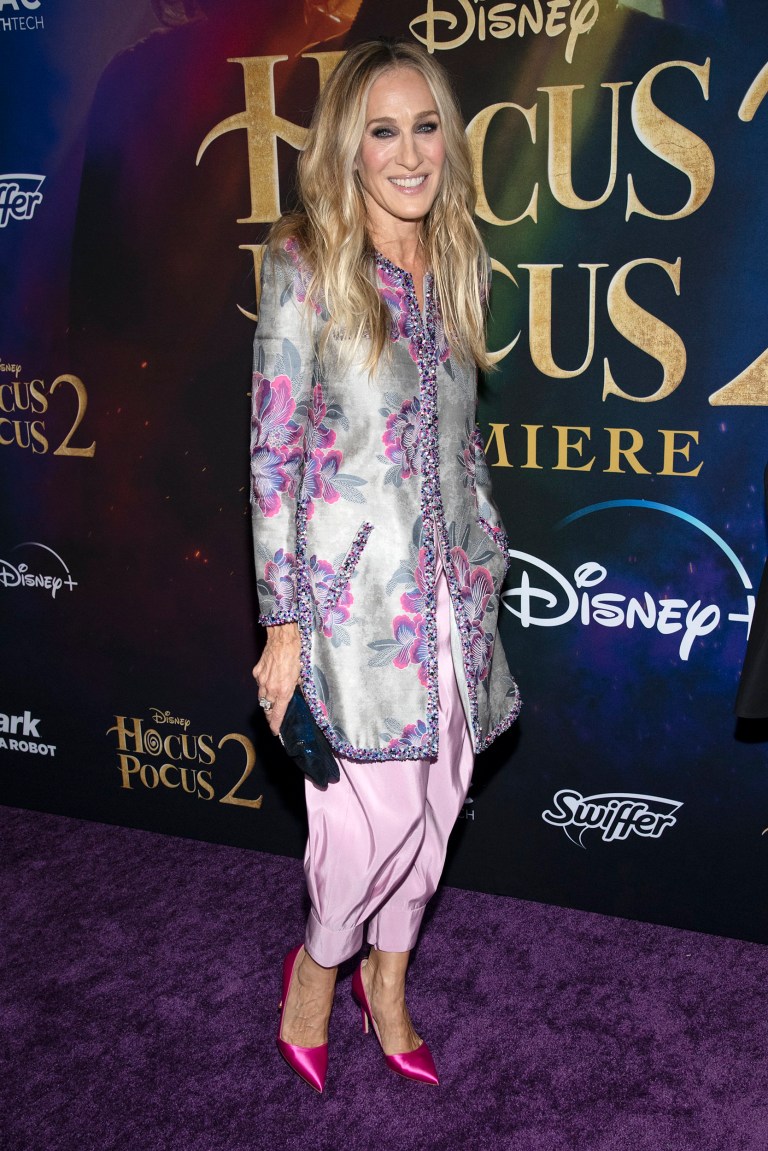 The Sex and the City star looked chic in shades of silver and purple (Picture: Getty)

Matthew and Sarah also share 19-year-old son Matthew, who was missing for the proceedings.

Meanwhile, singer and actress Bette, 76, stole the show in a dramatic black and white striped gown with rainbow sleeves.

She matched the floor-length dress with a bright pink turban on her head and drop earrings. 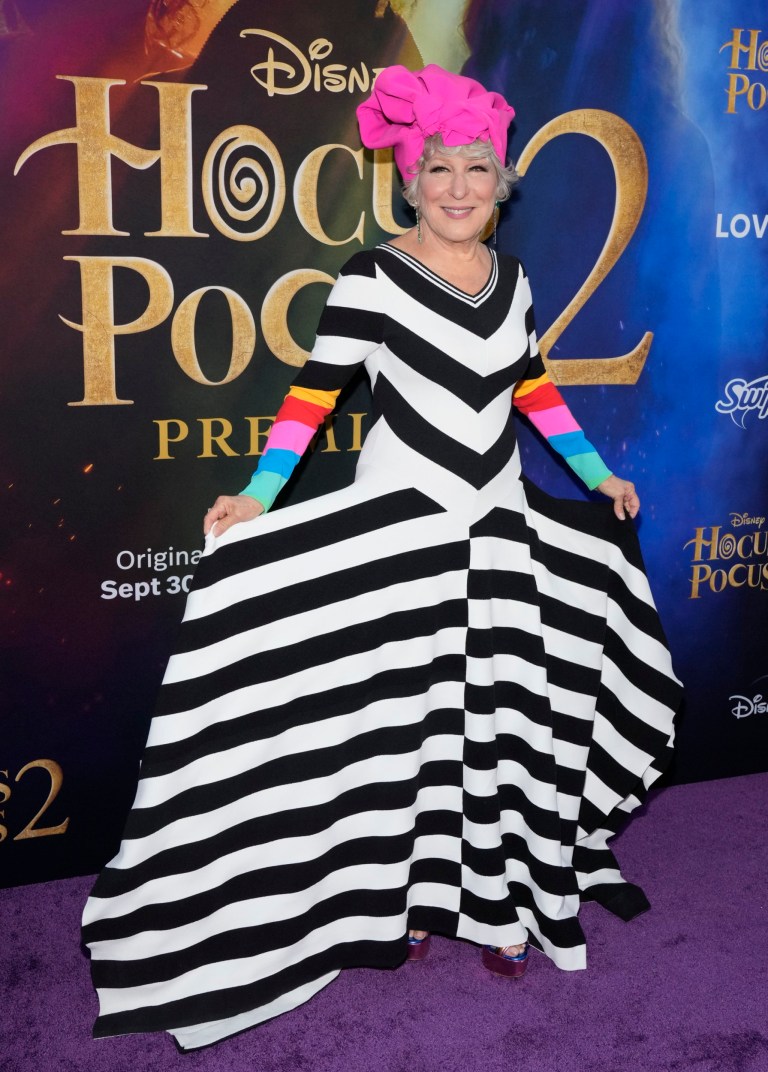 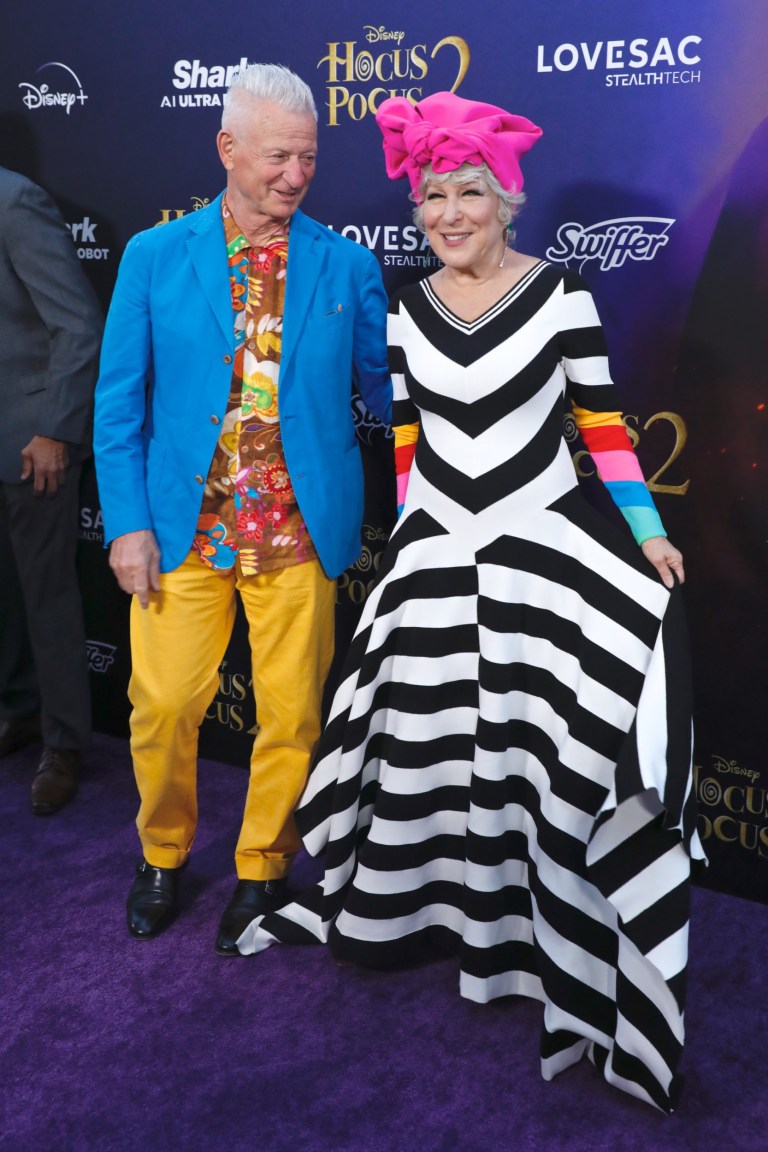 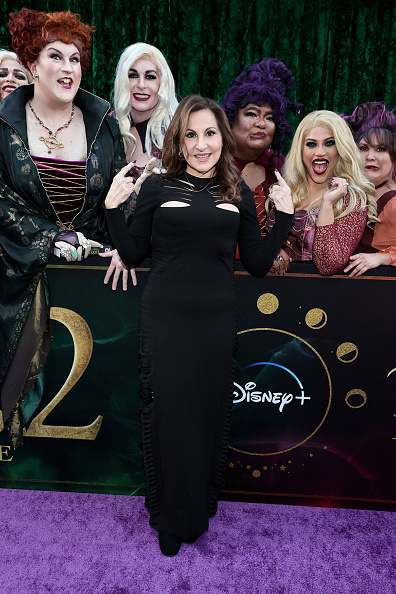 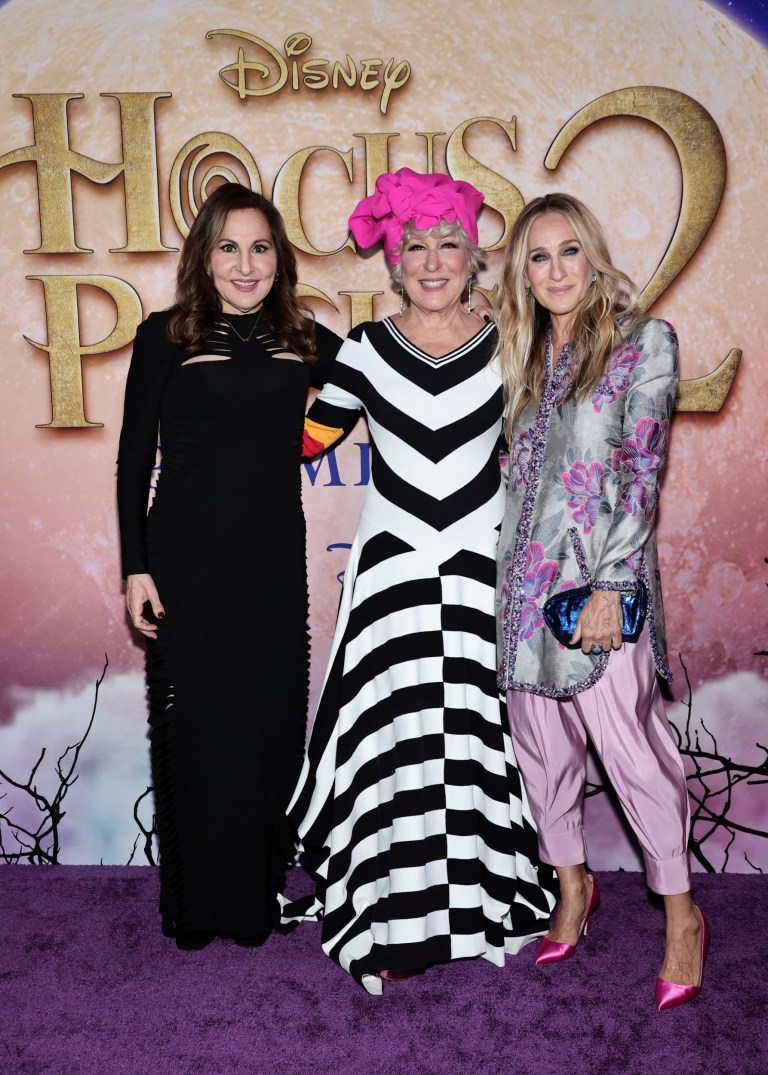 We love a coordinating couple!

Kathy, 65, looked suitably glamorous with a nod to her witchy character in a figure hugging black dress with cut-out detailing on the chest and up the sides of her legs. 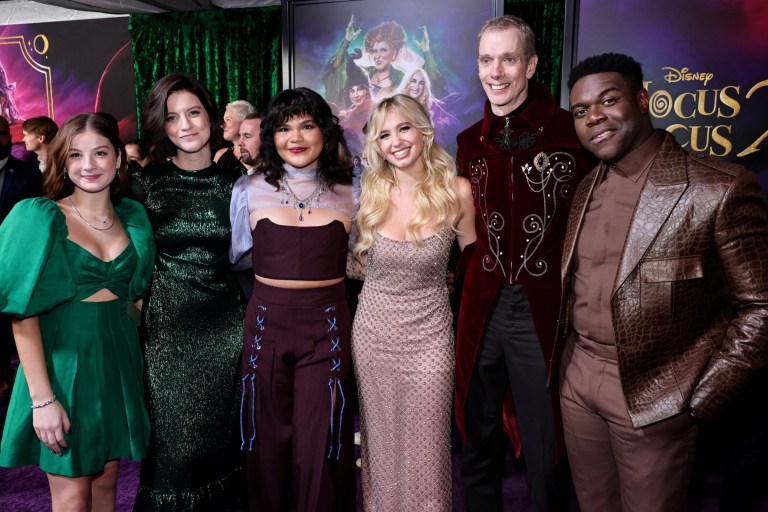 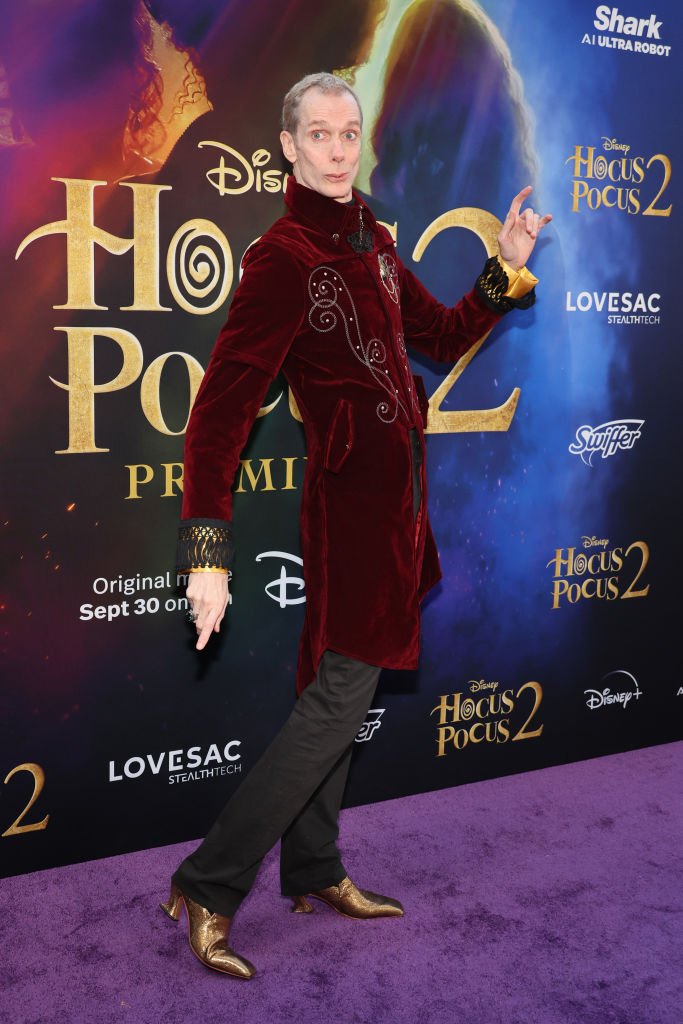 Doug Jones is back as Billy Butcherson (Picture:) 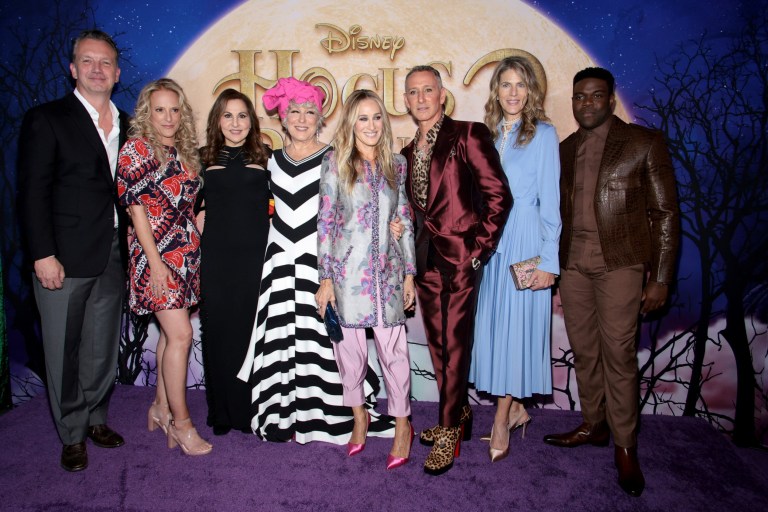 The Sister Act star was seen greeting director Anne Fletcher with a kiss, who previously helmed rom-coms The Proposal and 27 Dresses, as well as musical movie Step Up.

‘It’s a daunting task to take on something like this with the fandom because you don’t want to blow it,’ she told SFX Magazine.

‘It is very scary, I’ve never done a sequel.’

As well as getting a peek at the witches’ younger selves back in 17th-century Salem, the new film follows three female friends in the modern day who light the Black Flame Candle and accidentally resurrect the sisters.

Hocus Pocus 2 premieres on Disney Plus on Friday September 30.