LaKeith Stanfield is already getting rave reviews for his portrayal of William O’Neal in Judas and the Black Messiah, but it wasn’t the role he initially wanted to play in the film.

When the Atlanta star first got his hand on the script for the Black Panthers biopic, he assumed he would be playing the role of legendary activist Fred Hampton.

However, the 29-year-old was in for a slight surprise when the film’s director Shaka King revealed that they wanted him to play the role of the man who got Hampton killed.

‘I don’t know why I thought I would be playing Fred Hampton, I just assumed. But then the director was like, “Ah no, we want you to play William O’Neal”… the guy who got Fred Hampton killed.’

Thankfully, the actor still agreed to feature in the flick which delves into the story of how the FBI assassinated the chairman of the Illinois chapter of the Black Panther Party – played by his Get Out co-star Daniel Kaluuya. 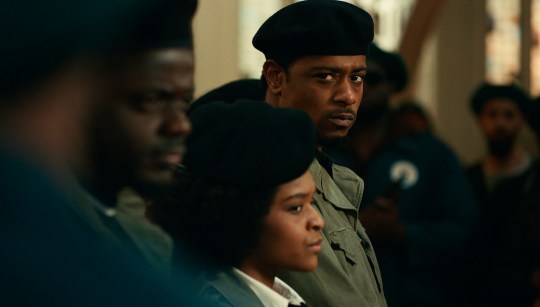 LaKeith Stanfield accidentally thought he was up for the role of Fred Hampton in Judas and the Black Messiah (Picture: AP)

When asked how much he knew about the Black Panthers and Fred Hampton’s story before the film, Stanfield recalled: ‘I came across [the Black Panthers] in high school, when we were in history class and they would just skip over the black stuff real quick.

‘Fred Hampton was not someone we spent a lot of time on so I spent time at home on google, looking him up and I came across his speeches and I was just moved by them. I thought, “This guy is amazing.”’

He continued: ‘So when the opportunity came to be in a movie about his life, I was all for it. I’ve always hoped to do something meaningful in my acting career so things like this, stories about this real big figures are important and I was happy to be a part of it.’

Judas And The Black Messiah will be released in US cinemas and HBO Max on February 12, while it is out in UK cinemas from February 26.