Jackass Forever is finally being released in cinemas this week after a series of delays, and the gang left no stone unturned in their quest for fun.

Johnny Knoxville and Chris Pontius led the cast – including Steve-O, Dave England and Rachel Wolfson – through dangerous, wild and very ridiculous stunts, with Machine Gun Kelly, Eric Andre and Tyler, the Creator among the guest stars on hand for tricks.

Released 20 years after the first Jackass movie hit the big screen, it had a mix of daring new exploits and updates of tricks we’d seen carried out in previous instalments.

If you’re worried that the stuntmen have lost their way since they first burst onto our screens, you have nothing to fear as they faced off against animals, pogo sticks, many tasers and each other – just because.

Be prepared to wince as we reveal the wildest stunts in Jackass Forever.

Johnny Knoxville knocked out by bull


Johnny Knoxville was hospitalised after this stunt (Picture: Paramount)

Johnny was sent to hospital after he attempted a stunt with a bull, while dressed as a matador complete with a milk-covered hat.

His co-stars watched with concerned anticipation as the trick began, with the bull quickly making a beeline for the stuntman.

In the blink of an eye, he was knocked into the air as the medical team rushed to his side – before eventually waking up and questioning if he pulled the scene off, and whether the milk fell out of his hat.

It was later revealed that he suffered severe injuries, including a broken wrist, broken ribs and a brain haemorrhage. 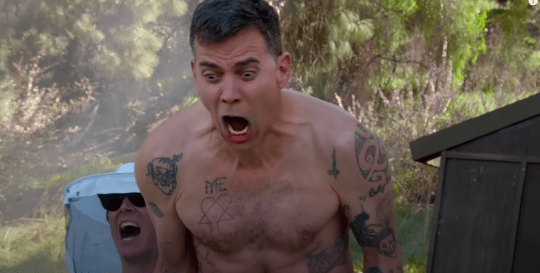 Steve-O did not have fun… (Picture: Paramount)

Steve-O took one for the team in this moment, as he stripped completely naked and allowed a beekeeper to place a very angry queen bee on his manhood.

The gang stood by his side in solidarity – some lucky enough to nab protective suits – as an entire hive of bees surrounded his genitals.

Considering the fact that he got stung even before the stunt began, you can only imagine how much pain he was in by the end… 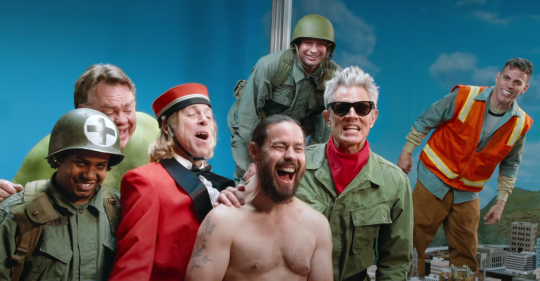 Jackass Forever is released in cinemas on Friday (Picture: Paramount)

It wouldn’t be a Jackass film if the cast didn’t go above and beyond to push the boundaries.

However, Danger Ehren didn’t appear to factor this in when he sat down with Johnny to do a seemingly innocent lie detector test, getting zapped for every ‘lie’ that came out of his mouth.

Cue his co-star slathering him with honey and putting salmon down his trousers and leaving the room, leaving him strapped to a chair and unable to run to safety when a bear entered through another door.

The bear ate the salmon and kept looking for more snacks, attempting to take a bite out of Danger at one point, leaving him fearing for his life.

Johnny shot out of a cannon 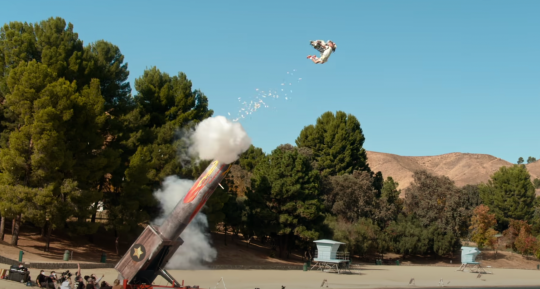 Johnny Knoxville went all out for the film (Picture: Paramount)

The trailer for Jackass Forever began with Johnny taking things to a totally new level as he was shot out of a giant cannon.

In true Johnny form, he did so donning a pair of white feathered wings, flapping them wildly as he was launched into the air.

Unfortunately for us all, the wings didn’t quite help him take flight and instead he took a huge, painful drop.

The band treadmill was one of the very first stunts filmed for Jackass Forever, and ended with Steve-O being rushed to hospital.

In the stunt, the group were dressed in a marching band uniform – including those heavy instruments – and tasked with jumping onto a full-speed treadmill.

It was a lot easier said than done as everyone consecutively crashed into the wall, with only the concrete floor there to break their falls.

Steve-O awoke covered in blood and later sought treatment for his injuries, before returning to the set for even more chaos.

Well, he’s nothing if not committed…

Jackass Forever is in cinemas on February 4.