Hammersmith-born George MacKay, 29, began his acting career aged 10, playing one of the Lost Boys in PJ Hogan’s live-action Peter Pan film. Subsequent roles include Pride, True History of the Kelly Gang, Sunshine on Leith and the lead in Sam Mendes’s Oscar-winning first world war epic 1917. Next, he stars in the films Wolf and Munich: The Edge of War, along with BBC One dram The Trick, about the 2009 “Climategate” email hacking scandal.

You’re about to start filming Shane Meadows’s new TV drama, The Gallows Pole. What can you tell us?
I’ve been a fan of Shane’s since for ever so it’s cool to be working with him. I’m going for my costume fitting tomorrow, then we start shooting in Yorkshire. It’s based on Ben Myers’s novel about an 18th-century gang called the Cragg Vale Coiners who started counterfeiting money out on the moors. They clipped coins on a massive scale but there was also a community aspect. It was pre-Industrial Revolution and local people were starving, so they found a way to make their own money and stick it to the man, as it were.

How’s your Yorkshire accent coming along?
Hopefully it’s passable. I’ve been reading Ted Hughes poetry to practise. I’ll maintain the accent all the time when I’m up there.

At least you don’t need a period beard. Apparently you struggled to grow one for True History of the Kelly Gang.
All I could manage was some ginger scruff, like a third eyebrow [laughs]. I feared it was a deal-breaker. Luckily they let me grow a mullet instead.

George MacKay and Jerome Flynn in The Trick. Photograph: BBC

Your new BBC drama The Trick is about the “Climategate” scandal. How did you get involved?
I’d worked with [director] Pip Broughton and [writer] Owen Sheers three years ago on To Provide All People – a poetic tribute to the NHS on its 70th anniversary. Free healthcare is such a special thing – just look at the past 18 months – and it was such a good, moral piece of work. I leapt at the chance to work with them again.

Was “Climategate” a story you knew much about?
I was still in my teens so missed it at the time. Unfortunately, the subject of climate change is even more pertinent 12 years on. The story is also about truth and trust of experts, which resonates in the fake news era.

Most of your scenes are with Jerome Flynn, as you play colleagues at a PR firm. How was working with him?
We formed a little double act and it was great to be shoulder to shoulder with him. He’s got a brawler quality, this weathered face that speaks of experience, but Jerome is a very thoughtful, sensitive man. I bet he could grow a beard instantly. Just close his eyes and squeeze whiskers out of his face.

Did the role affect your own attitude towards climate change?
It’s easy to lapse into a level of apathy but it made me so much more conscious. I considered afresh what the world could look like for the next generation. It made me think about the ramifications of individual actions. With 1917, we travelled so much and took a lot of planes. I’ve had a terrible carbon footprint for the last three years.

But you did a lot of running in 1917 too…
[Laughs] Yeah, there was definitely a physical footfall as well. But you have to check yourself and make changes if you’re going to participate. 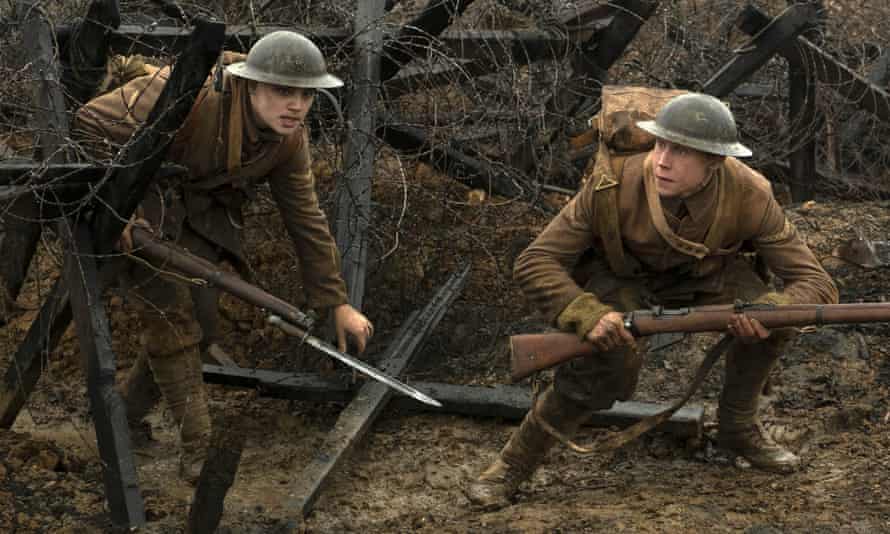 Was making 1917 personally significant for you? Your great-great-uncle served as a signaller in northern France, near where the film was set.
I didn’t actually realise that until after we’d filmed it. All the personal connections were attached more to the stories we learned of others who served. To hear about my great-great-uncle afterwards was certainly a moving thing.

Was it an honour being told to “fuck off” by Benedict Cumberbatch?
Always.

In the forthcoming film Wolf, you play a boy with “species dysphoria” who believes he’s a wolf. Was that a daunting project to take on?
A bit but exciting more than anything. I loved the boldness of [writer-director] Nathalie Biancheri’s idea and the challenge of it. When you try something strange but really commit to it, amazing things can happen. I’d wanted to work with movement coach Terry Notary since seeing him in a Swedish film called The Square. He played this man who lives as an ape, which was so bizarre and terrifying. Terry used to perform with Cirque du Soleil and now works in film. To be trained by him was such an experience. It’s about losing all self-consciousness and learning to be 100% in your body. To stop thinking like a human and instead be all about feeling. Unlocking that animal instinct.

How did you go about transforming yourself?
Physically it was difficult. I spent lockdown crawling around my flat on all-fours. I’d go out on Hampstead Heath at 5.30am and crawl until dog walkers started arriving. I got blistered hands from holding them in the paw position. I read books about wolves, watched a ton of wolf documentaries, went to look at wolves in captivity. I spend a lot of the film naked but that’s when my character feels most free and comfortable. I had to find my howl, too.

Your co-star is Lily-Rose Depp, playing a girl who thinks she’s a wild cat. How was working with her?
When you’re doing something so odd, you need to both be equally into it. Lily was wonderfully enthusiastic and open.

Also coming up is Munich: The Edge of War. Can you give us a flavour of that?
It’s a thrumming, pacy political thriller set in in 1938. Jeremy Irons is brilliant as Neville Chamberlain. I play a cabinet undersecretary trying to broker a peace treaty and avert the brewing war. We were filming during the Biden v Trump election and it felt all too resonant. There was a sense of uncertainty about what could happen if Trump got a second term. Looking at the populist politics of the 1930s, you could understand where that new nationalistic fervour can come from.

You’ve been mentioned as a potential James Bond. Fancy that?
It’s just grand to be in the mix. Well, as long as the next Bond doesn’t have a beard. That might rule me out.

Growing up, your mother was a costume designer. Did that mean you had fun playing dress-up?
Of course. It also meant we had beautifully done school plays.

What else makes you happy when you’re not working?
Catching up with friends, watching Chelsea FC when I can and playing a bit of guitar.

Would you like to play a rock star at some point?
I’m wary of playing people who’ve already done themselves better than I ever could. That said, I’d love to, not least because it’d be a great excuse to play guitar every day. I’m a huge Bob Dylan fan but I don’t know if you should play your hero.

Who makes the hottest trainers? Lidl! But you’ll have to run… | Lidl