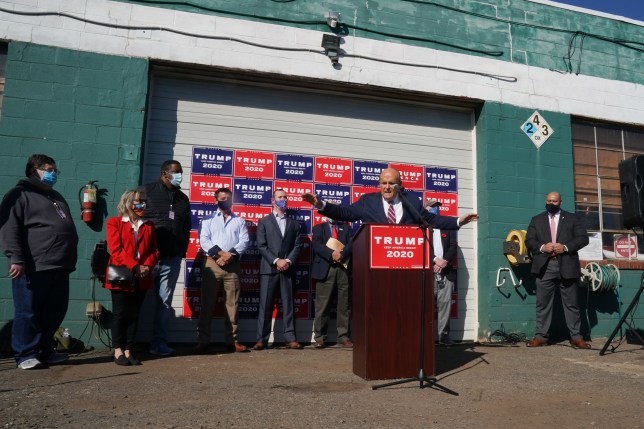 A documentary on this here moment of political infamy is being made (Picture: Getty Images)

If you feared the end of Donald Trump’s presidency meant you wouldn’t hear the words Four Seasons Total Landscaping again we’re here to tell you it’s your lucky day – a documentary into the political snafu is in the works.

This week is was announced a film, Four Seasons Total Documentary, which will explore the ‘rollercoaster’ events leading up to the company being the unexpected host of the infamous Trump campaign press conference on November 7, where Trump lawyer Rudy Giuliani announced the President was taking legal action to dispute the results of the presidential election.

While we all know how that panned out, we still have so many questions about how Giuliani came to address press in the carpark of the Philadelphia landscaping business.

Despite it clearly being a mix-up with the Four Seasons Hotel, the press conference still went ahead and now lives on in infamy.

Tweeting ahead of the press conference at the time – before he had his Twitter account unceremoniously suspended permanently – Trump had said it would be held at the Four Seasons, Philadelphia before it was corrected.

The Four Seasons hotel tweeted: ‘To clarify, President Trump’s press conference will NOT be held at Four Seasons Hotel Philadelphia. 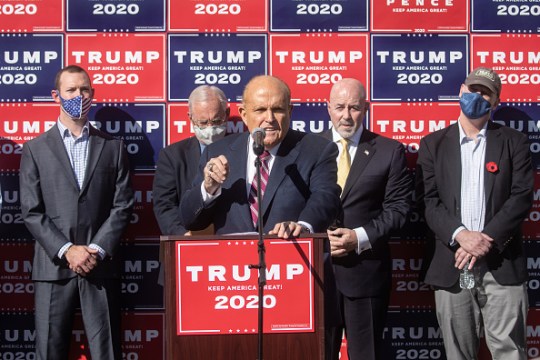 ‘It will be held at Four Seasons Total Landscaping – no relation with the hotel.’

Any questions we still have about the palaver – read: many – will hopefully be answered in the documentary, set to be directed by Christopher Stoudt and produced by Oscar winners Glen Zipper and Sean Stuart, which is ‘nearing completion this month’.

The press release says the doco ‘will give a firsthand account of the rollercoaster journey that one well-meaning small business in Philadelphia went through when they agreed to host a political press conference in the midst of the most hard-fought American election in recent history’.

The owner of the now-famous Four Seasons Total Landscaping, Marie Siravo, and director of sales Sean Middleton will also feature in the documentary, according to reports.

Addressing the news in a statement, Stoudt said: ‘It’s an honour and privilege to be able to help tell a story that the world has been waiting months to hear.

‘After such a hard year, everyone needed a moment to laugh. Little did we know it would come from a press conference that took place across the street from a crematorium (down the road from a sex shop).’

He added: ‘This film is a chance to wipe the slate clean, not just for Four Seasons Total Landscaping, but for the entire country.’

If you were worried you were nearing overload of chatter about the presidential election, the filmmakers insisted Four Seasons Total Documentary would be an ‘apolitical and feel-good tone’ look at events.

It comes after Four Seasons Total Landscaping made a surprise appearance during the Super Bowl on Sunday night, with the advert for Fiverr poking fun at the event, with Total Landscaping’s owner saying, ‘Success: It’s often right place, right time.’

A release date is yet to be announced.