Paul Walker fans are suitably shaken and stirred and ready to go, with the Fast & Furious franchise dropping a quick clip for the upcoming F9 during last night’s Super Bowl LV.

With the ninth film’s release being pushed back due to the coronavirus pandemic, you could say many are champing at the bit to finally get some new content from Dominic Toretto (played by Vin Diesel), Letty Ortiz (Michelle Rodriguez) and Co.

However, in the opening moment of the very short clip from Universal, a blue Skyline car caught many a fan’s eye with some suggesting this was a nod to Brian O’Connor, played by Paul, who tragically died in 2013.

We know what happens when we assume these sorts of things (we’re let down), but we really did figure as Brian drove off into the sunset at the end of Furious 7, helped along with some crafty CGI and Paul’s brothers, we wouldn’t see another appearance of him in the franchise again.

That clip has got everyone going wild, though.

Reacting to the trailer on YouTube, one wrote: ‘That’s Brian’s car in the beginning right?’ as another excitely chimed in: ‘THE SKYLINE!!!’

The blue Skyline made an appearance in the latest F9 trailer – what does it mean? (Picture: Universal) 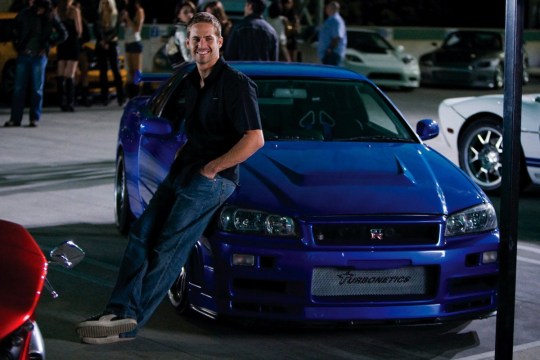 Paul Walker is the only one allowed to drive a blue Skyline… (Picture: Relativity Media/Universal/Kobal)

Other fans were coming up with theories as to who was behind the wheel of the car, which turned into the driveway of a house under construction.

Over on Twitter, people were getting just as heated by the moment, as they insisted no one else could ever drive the blue Skyline in a Furious film – but wondered whether Brian’s partner Mia (Jordana Brewster) was behind the wheel instead.

But that Skyline in the F9 trailer threw me off ð

Only one person drives a Skyline… but then again, one could assume that Mia is just driving the car and Brian is at home with the kids

My one question about fast 9 is that blue skyline could that be Brian’s old silver skyline?

‘I’m genuinely questioning this, who’s driving the Skyline in the beginning? It would make sense for Dom to be driving with the line he says….or it could be Mia, not sure,’ another fan wrote, as one replied: ‘Nah it has to be Mia for sure, after all her and Brian are married and they have a kid so it would make sense her driving it. But also they might bring Brian back with one of his brothers playing him with CGI but never know.’

Elsewhere in the trailer we’re blessed with the usual high-octane car chases fans expect from the Fast & Furious franchise, as well as cameos from a laughing Dame Helen Mirren and a winking Charlize Theron.

Professional wrestler John Cena also stars in the film as Dom’s brother, with the action taking place around the world, with stops in Edinburgh, London and Tokyo, as well as a secret bunker in Azerbaijan.

Justin Lin directed F9 and it was previously reported he will return for two more films to wrap up the franchise.

It’s not the first time we’ve got the feels with a Paul Walker tribute, after an earlier trailer began with an instrumental version of Wiz Khalifa and Charlie Puth’s tribute song See You Again, as Dominic and Letty played with Dom’s son, Brian.

It was previously suggested that Paul’s character could be making a surprise return to the franchise, six years after his death, after he was killed in a car accident on 30 November, 2013, aged 40, with brothers Cody and Caleb Walker stepping in to film his final scenes for Furious 7.

Cody previously opened up about potentially returning as Paul, after he filmed scenes for Furious 7.

‘I think anything is possible and we’ll see what the future has in store.

‘There are a lot of things that are said out there,’ he added. ‘There’s a rumour that the franchise might go to outer space next, so you never know… Nothing is off the table, never say never.’

You CAN be confident of Covid vaccines despite South Africa variant fears, says minister

Dorothy Perkins, Wallis and Burton have up to 80% off sales as Boohoo confirms £25m takeover