Eddie Izzard has opened up on her sweet friendship with Dame Judi Dench, describing the acting legend as ’16 years old at heart’.

The actors star together, along with Jim Broadbent, in Six Minutes to Midnight, a film co-written by Eddie about a real Nazi finishing school in Bexhill.

It’s not the first time Eddie, who plays a spy of both British and German descent, and Dame Judi, who stars as the headmistress at the school, have starred together, and that bond clearly helped them work through the more emotional scenes.

‘Working with all the girls – I don’t think she’d worked with 20 young girls in that situation, a Miss Jean Brodie situation before, but it’s quite a heavy day of filming.

‘They were basically listening to Hitler speeches and having to do the Nazi salute all day, so that was a very emotional day. But she was just always great, she’s always very lively and young and has just a great sense of humour. 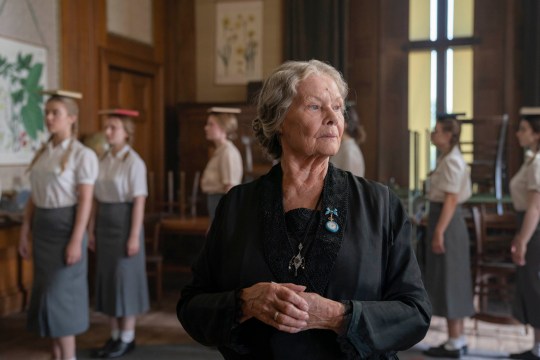 ‘She totally links in to the young girl inside of her. She’s still really 16 years old [at heart] which is great.’

Eddie also revealed the personal connection she has with the school in the film, the Augusta Victoria College, after she grew up in Bexhill.

‘My grandmother was born in this town, and my great-grandmother, so there’s a long history of Izzards going through the town, and so obviously I have a link with the town, and I’m a patron of the museum,’ she explained.

She went on to say that the curator of the museum showed her a blazer badge emblazoned with both a Nazi flag and a Union Flag.

‘They used to listen to Hitler’s speeches – this was in Bexhill in England – and they used to have Hitler speeches on the radio, and they would do the Hitler salute to the actual radio set and all this was going on in the 30s until the war happened, and then it stopped, and so I just thought, “There is a film in that!”‘

Young German actresses were enlisted to play the pupils at the school, with Eddie being determined to reassure them about the themes in the film.

‘I said to the German girls who were playing [the pupils], “This is not about your country being bad and ours being good, it’s about the ideas and the hearts and minds, that’s what we’re playing for.

Six Minutes to Midnight is available on Sky Cinema and Now TV from March 26.