Netflix has released the trailer for its epic new movie Don’t Look Up, and we’re going to need a moment to fully appreciate this cast.

It follows an astronomy student (Jennifer) and her professor (Leo) who discover that a comet is heading straight for earth.

However, things get even more terrifying when it becomes apparent that no one seems to care.

With the help of Dr Oglethorpe (Rob Morgan), they embark on a media tour that takes them from the office of an indifferent President Orlean (Meryl) and her sycophantic son and Chief of Staff, Jason (Jonah), to the airwaves of The Daily Rip, an upbeat morning show hosted by Brie (Cate) and Jack (Tyler Perry).

With six months to go, the pair are on a mission to get the world to just look up.


Jennifer Lawrence stars as the astronomy student who makes the discovery (Picture: BACKGRID) 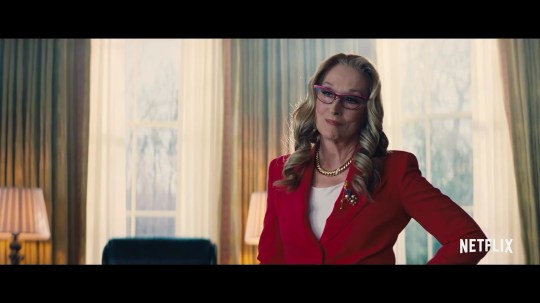 Meryl stars as the president with other things on her mind (Picture: Backgrid)

With The Big Short director Adam McKay at the helm, it’s sure to be a wild ride – plus he’s confirmed that Chris Evans is also set to make a cameo, just to add to the completely star-studded cast list.

The trailer starts with Leo’s Randall hyperventilating over the discovery he’s made, and attempting to convince Meryl’s Orlean and Jonah’s Jason that it’s something to be taken seriously.

‘You know how many “the world is ending” meetings we’ve had over the last two years’ Orlean asks, as Jason adds: ‘Drought, famine, hole in the ozone, it’s so boring.’

Don’t Look Up is released on Netflix on December 24.

‘My family were horrified’: Unseen Sex Pistols photos to go on show in London | Sex Pistols

Mélanie Laurent on The Mad Women’s Ball: ‘It was like the doctors were playing with dolls’ | World cinema

Judd Nelson: ‘Wearing a giant papier-mache head and smoking pot was a great way to spend the summer’ | Film