Disenchanted: Where to find all the hidden Disney Easter eggs 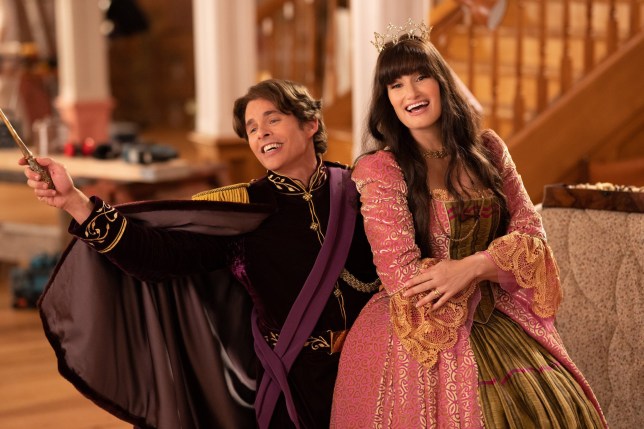 The film is filled with Disney references galore (Picture: Disney)

*This article contains spoilers for Disenchanted*

Disney has finally released its highly anticipated sequel to Enchanted, Disenchanted, and fans are delighting at the return of Giselle (Amy Adams) alongside her co-stars Patrick Dempsey, Idina Menzel and James Marsden.

After a 15-year wait to return to our fairy tale favourites, director Adam Shankman and the minds of Brigitte Hales, J. David Stern, David N. Weiss and Richard LaGravenese have served up a story of magic, music and mayhem.

Ten years after the events of Enchanted, Giselle, Robert (Dempsey) and daughters Morgan (Gabriella Baldacchino) and baby Sofia leave New York City for a fresh start in the suburban town of Monroeville.

However, after Giselle struggles to acclimatise to their new surroundings, she turns to the magic of her homeland Andalasia for help, accidentally placing her family and community in fairy tale jeopardy.

With a strong thread running throughout from Cinderella as our heroine battles against an enchantment transforming her into an evil stepmother, there are also plenty of other fun Disney Easter eggs and references for fans to relish, just like last time.

Disenchanted spends longer in the animated fairy tale land of Andalasia than its predecessor, including a sequence right at the beginning where chipmunk Pip begins to narrate the new story to his kids.

However, it’s not just adorable chipmunks and woodland creatures included in these scenes.

If you look closely, you can see what looks to be Ray the firefly from 2009’s The Princess and the Frog making a cameo.

Her singing voice still draws all creatures nearby (Picture: Disney)

One of the most iconic parts of Enchanted was Giselle’s voice charming all the animals who heard it, drawing them towards her.

Clearly based on Disney’s first princess, the film made a joke out of its New York location by having the princess’s famous Happy Working Song assisted by pigeons, rats and cockroaches.

These critters make a return in Disenchanted and Giselle bids farewell to them from the apartment’s balcony before leaving the city in a clear nod to an animated shot of Snow White surrounded by doves on her balcony.

Well in the garden

In another reference to Snow White – first released in 1937, a whopping 85 years ago – Giselle and her family have a well in their new back garden.

Although it’s not used for any wishing as such, it performs a crucial function in the story as the portal between Andalasia and Monroeville.

Beauty and the Beast musical cues

Alongside dancing cutlery during the song Fairytale Life, after Giselle has cast her spell and woken up in an altered reality, the new magic in Monroeville begins to reveal itself.

The number shows her dancing and singing with kitchen instruments, including cutlery, which is of course a clear homage to 1991’s Beauty and the Beast.

In case you were in any doubt over the reference, the song then doubles down on its Beauty and the Beast tribute, inviting listeners to ‘be our guest’.

Of course we have one of these in Monrolasia (Picture: Disney)

Ah yes, there’s a magic mirror on the wall, played by owner of the local coffee shop, Edgar (Oscar Nuñez).

Villain Malvina (Maya Rudolph) is seen quizzing him on who is the most powerful individual in Monrolasia, once she is transformed into the Evil Queen of the fairy tale version of Monroeville.

One of the most fun (and obvious) Disney references of all is chipmunk Pip’s transformation into an evil fat cat.

At the beginning of Disenchanted, he mentions ‘not being proud’ of the part he plays in the story, and it eventually becomes clear why.

As Giselle’s change into the evil stepmother trope continues – bringing in other Cinderella nods such as locking Morgan in a dusty bedroom in the tower – Pip suddenly morphs from sweet chipmunk into a prowling, villainous cat, in a clear homage to Cinderella’s family’s mean feline, Lucifer. 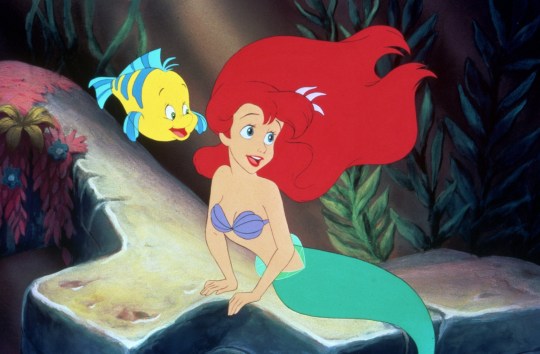 If you’re a true Disney nerd, you’ll spot this one (Picture: Rex/Disney)

A blink and you’ll miss it moment, Morgan channels her inner Ariel during a moment in the song Perfect.

As she goes about her day in Monrolasia, she becomes involved in a group dance with her fellow townsfolk.

At one point, she is lifted up ad forwards, with water from buckets sloshed behind her forming into the same splash as Ariel’s climactic one on the rock as she finished singing Part of Your World.

After being locked in her bedroom at the top of the tower, stopping her from going to the ball as part of Monrolasia’s festival, Morgan opts to escape her bedroom through the window.

Her hair might not quite be long enough, but she throws her tied sheets out the window in a manner reminiscent of Rapunzel’s braid in Tangled. 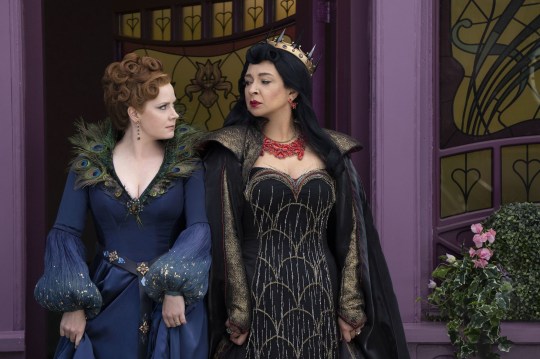 This cracking duet between Giselle and Malvina is chock full of Easter eggs just on its own.

Alongside specific references to iconic Disney villains Maleficent and Cruella in the lyrics, we also get a raft of quick nods to iconic films and princesses.

From a spindle shown during the number, just like that in Sleeping Beauty, the 1959 animation is then included again when Malvina opens a cupboard of her potions and there is a red vessel shaped just like one of Aurora’s fairy godmothers, Flora.

Next to that bottle, there’s a poisoned apple like in Snow White, as well as a ‘drink me’ bottle from Alice in Wonderland.

Giselle’s mode of transportation in the fairy tale version of Monroeville is a play on Cinderella.

It might not quite be a pumpkin, but the reference is clear. 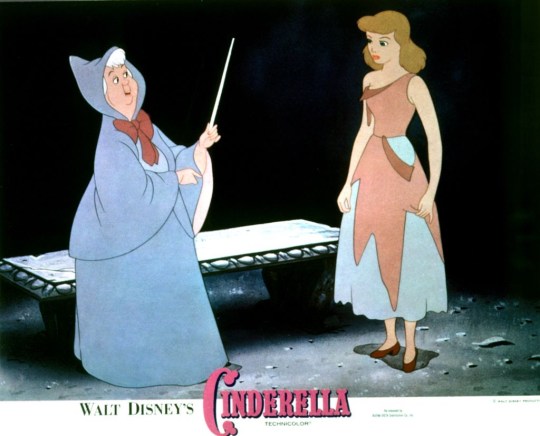 As Morgan is essentially cast in the role of Cinderella for the second half of Disenchanted, we see fun references to that with her wardrobe.

Her original dress she plans – and hopes – to wear to the ball ends up ripped in a similar fashion to that princess’s original pink ribboned gown.

After Morgan travels to Andalasia to try and fix the spell that’s wreaking havoc, she gets to enjoy a transformation in animated form just like Cinders when magic spruces up her dress ahead of the ball. 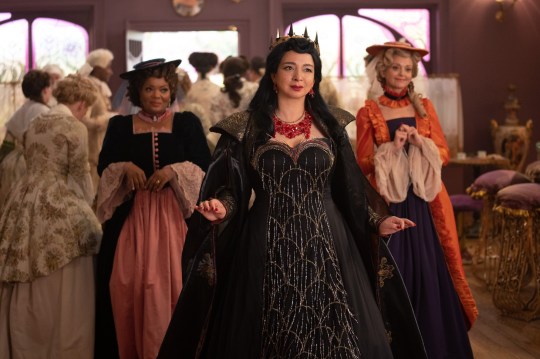 Rosaleen and Ruby swap to dresses later in the film with a very familiar design (Picture: Disney)

Malvina has two accomplices, Ruby (Jayma Mays) and Rosaleen (Yvette Nicole Brown), who rush to fulfil her whims as best they can.

Neither is the sharpest tool in the shed, but there’s a lovely link made to Cinderella’s stepmother Lady Tremaine through them.

For the ball in Monrolasia, Ruby and Rosaleen dress in pink and green ballgowns that are real-life versions of the dresses Cinderella’s stepsisters Anastasia and Drizella wear – snaps to the costume department.

In one of the less-explored strands of the plot, Morgan takes a shine to Malvina’s son Tyson (Kolton Stewart).

Both in Monroeville and Monrolasia, he is shown to be a decent sort, embarrassed by his mother’s scheming.

He gets to show off his credentials by dressing as the one and only Prince Charming to Morgan’s Cinderella, in the instantly recognisable white suit with blue flourishes and gold tassels on the shoulder.

Another clock counting down to midnight (Picture: Disney)

In what is a nice link back to both Cinderella and Enchanted, Disenchanted ends with a climactic ball scene that brings everything together.

As the spell that Giselle has cast unwittingly causes chaos that threatens to remain permanent, they are running against the clock.

The deadline is, of course, midnight.

Disenchanted is streaming on Disney Plus now.

Scotland: Woman swept away in flood was ‘trying to rescue her dog’