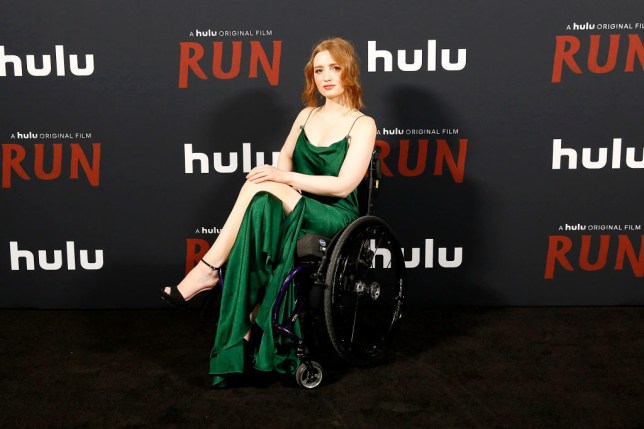 To my surprise and equal delight, the actress that plays Chloe in the film, named Kiera Allen, is a disabled actress from New York and Run is her debut film. It’s great to see fresh talent emerging (Picture: Rachel Murray/Getty Images)

I don’t know about you, but it feels like I have exhausted everything there is to watch on television and online nowadays.

Dare I say I’ve even dusted off my dated DVD collection, compiled of mostly teen angst films, and frantically searched my flat for a HDMI cable to connect an old DVD player all to to quell my lockdown boredom.

Feeling a little uninspired last weekend flicking through my Netflix subscription (‘seen it, seen it, nah not my cuppa tea’), I finally made an executive decision to follow the masses and simply watch the number one film that happened to be the new thriller/horror Run. I’m so not ‘down with the kids’ anymore and had no clue what it was about!

As I settled in bed with some nibbles, not 100% invested with one eye on the film the other scrolling on my phone, my attention suddenly piqued.

I saw a young woman in bed and beside her was a wheelchair.

The film features the fabulous Sarah Paulson. She plays Diane, who keeps her daughter, Chloe, shielded (doesn’t that sound familiar?) from the outside world after her premature birth, which led to a number of complex health conditions including paralysis.

As a wheelchair user myself and someone who has worked in film and television, seeing someone that looks like me is always a pleasant delight because even in 2021 it is a rarity.

My happiness grew when I saw her come down the stairs to her home in a platform stair lift and, as someone who is slowly saving for a house deposit, I immediately became excited, ‘Oh, that could totally work for me,’ I thought.

After Googling the price of platform stair lifts and making a note on my vision board, another thought occurred to me. I returned to Google and searched; ‘Is the character Chloe in Run played by a disabled actress?’

This might seem an odd question to most, surely it shouldn’t matter, right?

Well, as a disabled actress myself it most certainly does. The art of ‘cripping up’ – where non-disabled actors play disabled roles – is still prevalent, taking work and opportunities from an already grossly marginalised and underrepresented group.

A recent example would be Sia’s film, Music, which featured non-disabled artist Maddie Ziegler playing an autistic person. With only two Oscar winners openly having a disability in the entire 93 years of the awards, it is even more important to give disabled artists the platform they deserve.

To my surprise and equal delight, the actress that plays Chloe in the film, named Kiera Allen, is a disabled actress from New York and Run is her debut film. It’s great to see fresh talent emerging.

Not only is seeing authentic representation empowering and makes me feel like I belong, it also (excuse the term) ‘normalises’ disability. It shares our world with others.

Many people may never have thought about access needs or accessible housing until seeing this film, which features the stair platform lift as well as showing Chloe using her home-made ‘grabber’ to reach things from the top shelf; a common hack for disabled people.

Seeing how a disabled character navigates the world may inspire other deaf and disabled people, as it did me with the stair platform. Authentic representation creates awareness for everyone and I wish I could see it on TV/film more often.

But it goes beyond hiring disabled actors. The tone, narrative and language used within film and television all need to reflect real lived experience and negate any harmful stereotypes about living with a disability – for too long we have been depicted as victims, villains, hopeless, loveless. This shift in attitudes and portrayal can only happen when deaf and disabled people are consulted from the initial idea, script writing and production.

A great example in this film – forgive me as it is a little spoiler – is when Chloe’s character at the end regains more mobility in her legs and therefore becomes an ambulatory wheelchair user. To paraphrase, Chloe says, ‘My walk’s got better, trainer says it may improve, or it may not, but I’m happy either way.’

Why is this significant and so powerful?

I don’t dream of walking or being cured; my life is very fulfilled as a wheelchair user and I’m happy just how I am.

On the flip side – more spoilers, sorry – the story of the mother who clearly experienced trauma and perhaps PTSD from losing a child resulting in her behaviour was, in my opinion, off.

It alluded to the fact that trauma tips everyone over the edge to behave irrationally and even psychotically, which is far from the truth. Invisible disability and mental health issues were used to create a monster-type character in the film.

I personally have depression, PTSD and have experienced trauma in my life but this doesn’t make me an unhinged, homicidal, manipulative person.

I was also a little disappointed by the theme of codependency – the notion that a mother gives up her life to ‘care’ for her daughter and this has shaped the irrational behaviour of the mother in some way.

Speaking from experience, I had a codependent relationship with my own mother, but this was due to lack of support from local government rather than a direct result of my disability.

One could play devil’s advocate and say it’s just a film – a horror suspense at that – and there needs to be dramatization. But at whose expense?

I loved how Chloe’s character was feisty, not a victim and she didn’t see her disability as a bad thing. But, equally, a film that depicts someone who has experienced mental health issues – which is an invisible disability – turning into a villain shows disability as something to be scared of and feared.

This is a narrative that has been around for decades and for me it was rather paradoxical.

Perhaps it’s because we still don’t fully recognise disability outside of someone with a physical impairment and mental illness is still a taboo?

Wheelchair-using Samantha gave this film a thumbs up but my other lived experiences as a disabled woman meant the film left me feeling uneasy.

The pressure to recognise and employ deaf and disabled artists not just on screen but in roles behind the camera is mounting both in the UK, with the BFI’s recent Press Reset campaign, and in Hollywood with the recent open letter from C-talent – an agency representing disabled artists and athletes – asking Hollywood Studios to employ a disability officer; an actual disabled person to have overview on disability representation and access requirements.

I’d like to see films that don’t have disability or chronic illness, visible or invisible, at the centre of the story unless they are authentic lived experiences that show a fair and balanced take on life with a disability.

What must be avoided is a dramatized, ableist take on what non-disabled people assume life as a disabled person to be like.

I’m delighted to see a new emerging generation of disabled talent being recognised but we still need more deaf and disabled people at the top to ensure that we are represented in an authentic way.