Before Con Air, Simon West had never directed a feature film before. Soon enough, he found himself crashing a real plane into a casino on the Las Vegas strip, with 17 cameras, 200 stunt performers, and 15,000 people watching. And it went wrong.

‘That was the biggest stunt because that was a real plane and a real casino they were going to knock down,’ the filmmaker recalled to Metro.co.uk.

‘So we could do whatever we liked to it and it was only one take because once the plane starts moving, you can’t stop it. We had 200 stunt performers because everyone near it had to be a stunt performer, it couldn’t be extras. That’s when we had 17 cameras on it from every angle, because it could only happen once. And of course it didn’t go right the first night. Going down the ramp, it stalled. We had to do it all again the next day.

‘We were on the Vegas strip and they put a barrier up, and there were probably 10,000, 15,000 people watching us do this stunt. It’s not like our failures were done in secret! We had a massive audience watching this thing go wrong. We came in the next day, set up 17 cameras again, trying to shoot it before the sun came up. And again, another 15,000 people came to watch and thank goodness this time it went right.’

The 1997 blockbuster, which follows newly-paroled ex-con and former US Ranger Cameron Poe (Nic) as he finds himself trapped on a prisoner transport plane when the passengers seize control, starred an incredible cast led by Nic, John Cusack (Agent Vince Larkin) and John Malkovich (Cyrus Grissom). It started out as a character-driven flick and, 25 years on, it’s looked back on as one of the most outrageous and quotable action films in cinema history.

‘It feels like people like it more than when I made it! It seems to have grown in affection,’ Simon admitted ahead of the Con Air screening and his Q&A at the London Action Festival. ‘When it came out it was [seen as] just another action film, and I think then as it got re-shown on TV, people started to invest more in it and it’s lasted longer than a lot of action films.’ 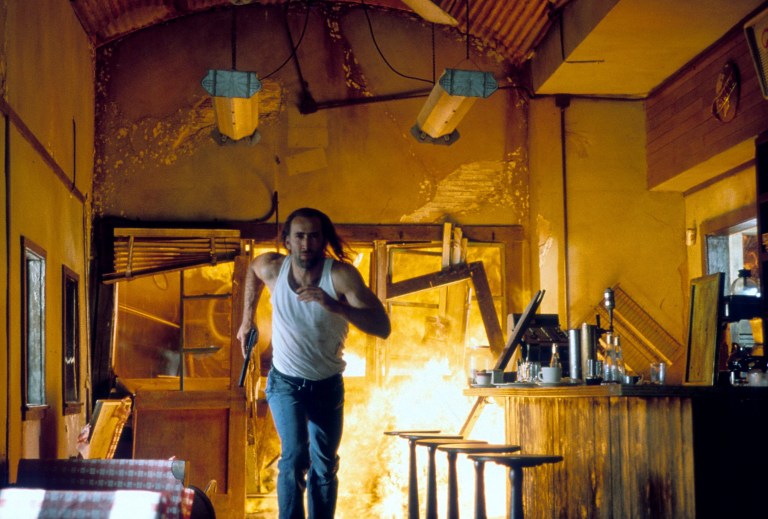 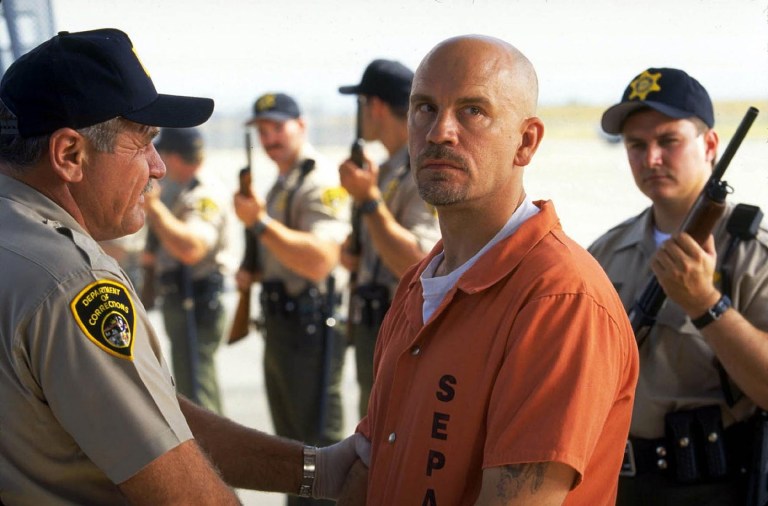 The love for the film is partly down to the amazing cast, made up of some of the most recognisable names in Hollywood. And getting the best out of them meant Simon learning how exactly each of them worked – and quickly.

‘Nic Cage prepares all night the night before, comes in ready to do it, and wants to do like three takes because he knows exactly how he’s going to do it,’ Simon explained. ‘John Cusack comes in and wants to do 50 takes without stopping the camera because he needs to pump up his energy. So I didn’t stop the camera.

‘And then Malkovich comes in and sounds like he’s never read the script. And he makes up something different every take so I have to make sure I can edit it together, because he’s going to do something completely different – most of which I think is going to be too outrageous to be in the film, but then when I’m in editing, I go, “Actually, some of this outrageous stuff is reallly good,” and I put it in the film.’

Malkovich was always the first choice for Cyrus ‘The Virus’ Grissom, the ruthless mastermind behind Con Air. But he wasn’t the only actor in the running.

‘Jason Statham came in to audition when he was just starting out, and of course I’ve done three films with him since,’ Simon pointed out. ‘People like Jason Isaacs came in for Malkovich’s part. He was very handsome and he still is and he was never gonna be the bad guy – no one would be scared of Jason Isaacs with his blue eyes and square jawline! Malkovich was the first choice and then I saw hundreds of people after that and just came back to Malkovich.’ 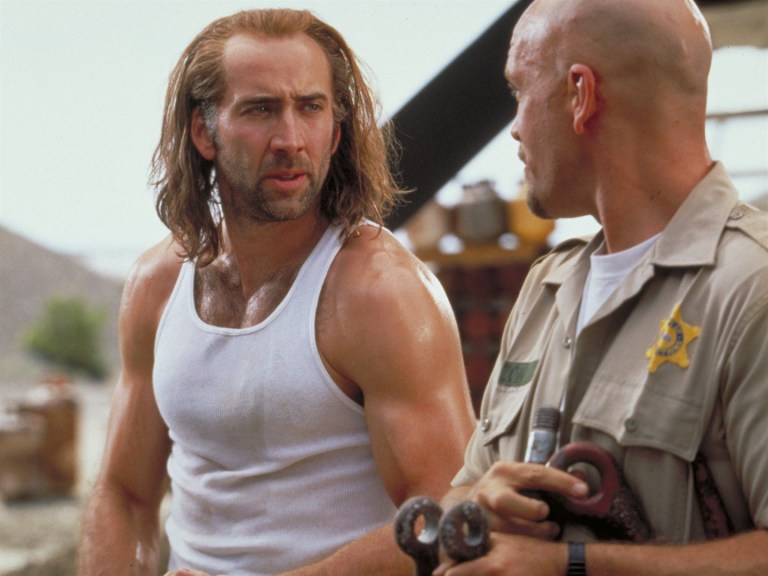 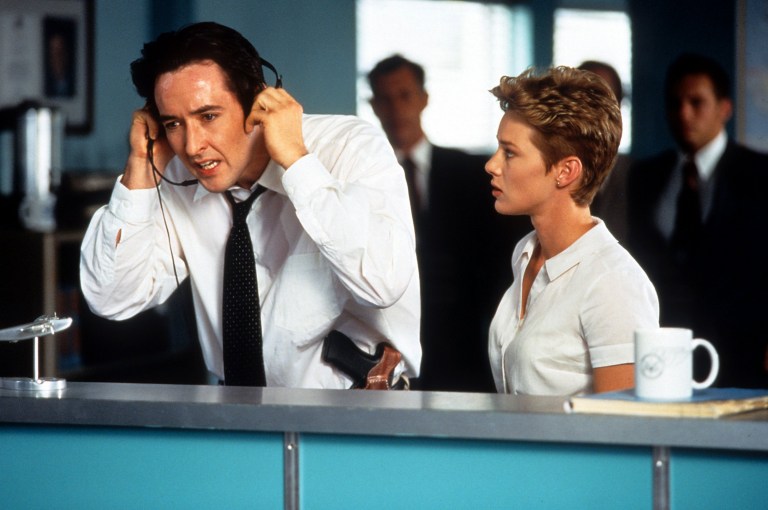 As for Nic, the man of the moment?

‘He was such fun to work with because he is very much like the fun personalities you see in his films. He’s crazy, he’s funny, he’s excitable, he’s very emotional, he’s very intelligent, so he’s really fun to work with. You never know what’s going to happen next. But he’s also very professional and hard-working. He’s probably the person on the set who’s most focused and spent the most preparation. Even the preparation he did on his physical state, he was so fit. I would watch him practicing in the corner doing his fitness regime and I would see him do something impressive and I would put it in the movie. I looked over one day and I saw him doing upside down one-handed push-ups. So I put that in the title sequence, in [Cameron’s] prison cell.

‘He was the fittest guy on set and he transformed his body into this machine, it was incredible. He’s also interested in the character. We did have one thing where I showed him a picture of a real prisoner that I’d seen in Folsom Maximum Security Prison when I’d visited for research, he had a huge moustache that covered most of his face, and I was showing it to Nic for the tattoos and outfit but he saw the moustache and said, “I’ve really gotta have the moustache.”

‘He wasn’t interested in being just a run-of-the-mill leading man, he wanted to be different and he was still that indie actor and not the Hollywood movie star at the time, and he was all about creating a very bizarre character but unfortunately the moustache did not make it into the film.’

Simon had a huge impact on the script, and became known as the ‘enlarger’ after managing to turn one line of dialogue into five pages of ridiculous, fast-paced action.

But not everything made the cut – and there’s one scene he regrets leaving on the cutting room floor. 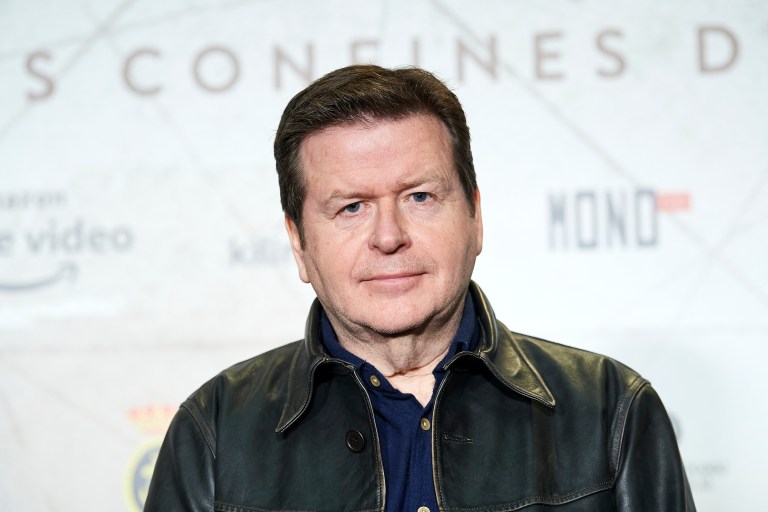 Simon West has since directed Lara Croft: Tomb Raider, When A Stranger Calls, and The Expendables 2 (PIcture: Carlos Alvarez/Getty Images) 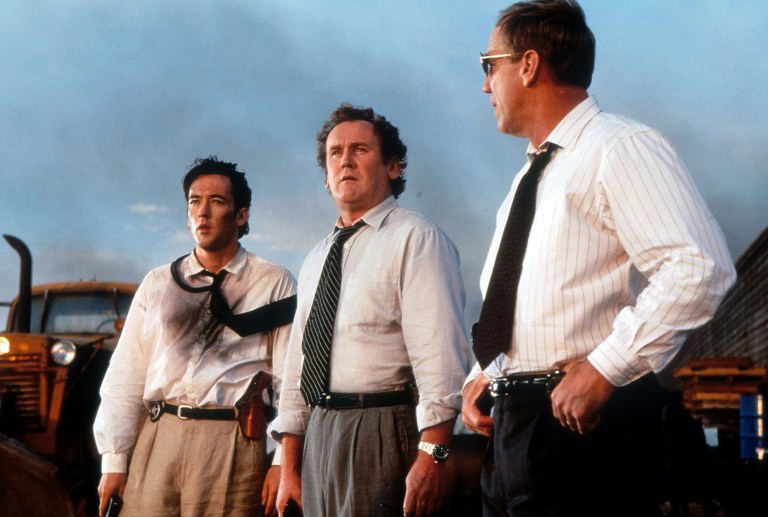 The film almost had a different ending (Picture: Getty Images)

‘[It’s] when they’re escaping the sandstorm,’ Simon explained. ‘It’s just before Dave Chappelle (Pinball) gets dropped out of the plane onto the car, there was a sequence where the cops who are chasing them get very close and the plane hits the police van and the police van goes flying in the air. It’s an exciting action sequence but I didn’t think it was quite up to the standard of the rest of the film so I didn’t use it. But now I think it actually would have been a nice pace thing to bridge it. But it’s there somewhere. Somebody one day will dig into the vaults and find it.’

The film almost had a different ending too.

‘Some things were cut out before we shot them because they were too expensive,’ Sinon went on. ‘Like the ending – I had a whole underwater sequence that I’d prepared and I storyboarded. When the plane crashes but instead of going straight into the casino, it was going to go into the lake in front of the casino and go into the water and there was a whole underwater fight between Nic and Malkovich underwater. When we budgeted it, it was just too expensive. But it was all prepared and it could have been quite a different ending. And that got substituted for the fire truck chase at the end, which was more possible to do for the money.’

But a couple of cut scenes didn’t stop it from becoming an absolute sensation, and launching Simon’s career in Hollywood.

Despite Con Air being his first film, the filmmaker (who also went on to direct Lara Croft: Tomb Raider) wasn’t worried – although he now admits he should have been, recalling that even Tom Cruise warned him it wouldn’t be as easy as he thought it would be.

‘I was a little bit naive,’ he explained. ‘I didn’t realise how difficult it was going to be. You sit around for months and months of preparation, coming up with the ideas and inventing this stuff and it seems easy when you draw it on a piece of paper. I really did not expect how difficult it was.

‘But on the other hand, I did have huge resources. With a studio like Disney behind you, you do have incredible resources behind you. I could just invent stuff and it would appear weeks later. Like, I just drew that on a piece of paper – now they’ve built a huge aeroplane that’s going to crash into a casino.

‘It was an incredible feeling, especially for your first film. I wasn’t really used to the length – it was 100 days of shooting, some days we had 17 cameras running on the big stunts, and nothing can prepare you for that. It was a bit of a shock and it took me a while to recover from it afterwards!’

He also had a huge impact on the script. ‘They called me the enlarger because I was given a line and it turned into this huge sequence. I was encouraged to do that because the original script was a small, character driven film. It was written as a small film. [Producer] Jerry Bruckheimer told me, “You’ve gotta turn it into a summer blockbuster,”‘ Simon remembered.

‘So I just had to go through from beginning to end, going through every situation methodically, like “How can this be more and more outrageous?”

Sun, sea, and super seafood: Why Agios Nikolaos in Crete is the place to be