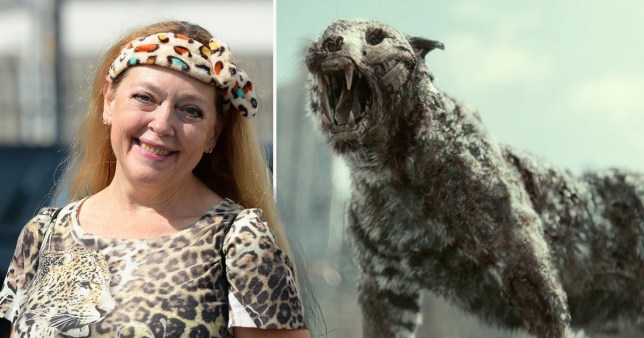 Carole Baskin’s real-life tiger was the muse for zombie tiger Valentine – and we’re not sure who’s more terrifying (Picture: Rex/Netflix)

Somehow, we’re being blessed with a crossover of Tiger King and Zack Snyder’s Army of the Dead that we never knew we needed.

Fresh from his Justice League #SnyderCut glory, the filmmaker is gearing up for his anticipated Netflix zombie blockbuster starring Dave Bautista, Ella Purnell and Omari Hardwick.

In the trailer released earlier this month, you might have noticed the real star of the show – a zombie tiger who looked like it could do more damage half-dead than alive with its face and skin half rotted and gnashers on-show while ready to pounce.

It turns out the CGI-zombie tiger was based on a real-life one owned by Joe Exotic’s life-long nemesis Carole Baskin.

Netflix tweeted this week: ‘Fun Fact: The CGI zombie tiger in Zack Snyder’s Army of the Dead was modeled on a real tiger owned by — wait for it — Carole Baskin!’

Oh, and zombie tiger has a name, FYI… Valentine.

Producer Deborah Snyder confirmed the surprising revelation during a Justice Con virtual panel and explained that the crew contacted several animal sanctuaries in order to get a real-life reference for modelling and animating Valentine.

Fun Fact: The CGI zombie tiger in Zack Snyder’s Army of the Dead was modeled on a real tiger owned by â wait for it â Carole Baskin! pic.twitter.com/mjqs3Jk2sb

As it turned out, the chosen tiger belonged to one Ms Baskin.

Perhaps even more of a coincidence, this all happened before Tiger King was released at the beginning of 2020 so it was all divine fate.

The Army of the Dead team spent a week at Carole’s animal sanctuary and Deborah joked: ‘At least they got out of there alive.’

Somewhere in a Texan prison, Joe Exotic is shaking with rage.

Army of the Dead will see Scott (Bautista) lead a gang of thrill-seeking experts on a major heist in Las Vegas. They’re tasked with breaking into a vault and retrieving millions of dollars, but things go pear-shaped when a zombie apocalypse breaks out while they’re on the rob.

The official synopsis reads: ‘When Scott Ward (Dave Bautista), a displaced Vegas local, former zombie war hero who’s now flipping burgers on the outskirts of the town he now calls home, is approached by casino boss Bly Tanaka (Hiroyuki Sanada), it’s with the ultimate proposition: Break into the zombie-infested quarantine zone to retrieve $200million (£145m) sitting in a vault beneath the strip before the city is nuked by the government in 32 hours.

‘Driven by the hope that the payoff could help pave the way to a reconciliation with his estranged daughter Kate (Ella Purnell), Ward takes on the challenge, assembling a ragtag team of experts for the heist.

‘Scott finds an unexpected emotional hurdle when Kate joins the expedition to search for Geeta (Huma Qureshi), a mother who’s gone missing inside the city.

‘With a ticking clock, a notoriously impenetrable vault, and a smarter, faster horde of Alpha zombies closing in, only one thing’s for certain in the greatest heist ever attempted: survivors take all.’

Army of the Dead is out on Netflix on May 21.