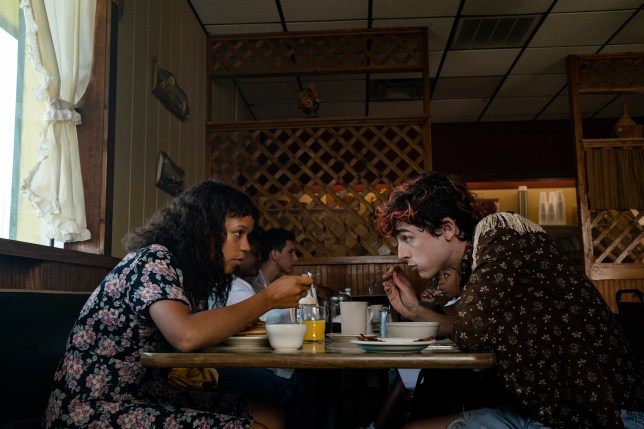 One of the hottest movie stars today, with fans drooling over his gender-fluid style, Timothée Chalamet certainly looks good enough to eat. But would you – actually? Eat him, that is. Even the most die-hard ‘Chalamaniac’ might balk at that.

Well, hold on to your stomachs, kids, because graphic cannibalism looms large on the menu of Timothée’s latest film where the Dune star plays a sexy flesh-eater.

He’s the love interest of a girl called Maren (Taylor Russell), a quiet 18-year-old who goes on the run after she bites off her schoolmate’s finger.

Abandoned by her long-suffering father (André Holland), Maren searches for her mother.

Along the way she has her first creepy encounter with another ‘Eater’ (Mark Rylance, chewing up the scenery and everyone else) before bumping into a fine young cannibal, Lee (Chalamet), while she’s shoplifting. The two then munch their way across America like a carnivorous Bonnie and Clyde.

Reteaming Chalamet with his Call Me By Your Name director Luca Guadagnino, Bones And All is, similarly, another forbidden romance set in the 1980s.

In this case, the lovers’ chemistry kinda works, kinda doesn’t. Where Chalamet is wildly charismatic, Russell is subdued to the point of unreadable – possibly a mercy, given the double whopper-sized hamming displayed by Rylance and, later, Michael Stuhlbarg.

That said, what actor on Earth could deliver lines like,‘I ate my own grandad whilst they were waiting for the undertaker’ without giving you the giggles?

Adapted from Camille DeAngelis’ YA novel, there’s an interesting, edgy friction as a sweet and tentative first love story bumps uglies against scenes of gut-churning, flesh-tearing horror. But to what effect?

Dreamily shot, it’s all so achingly hip it hurts. But after two hours and 10 minutes of slow-burn meandering, I was hungry for more meat on these bones.

Out today in cinemas