Adam Sandler has thrown it back to his time on Happy Gilmore to celebrate the film’s 25th anniversary, teeing up on the golf course.

In the film, the Click actor played retired ice hockey player Happy, who discovers he has a talent for golf, much to the professionals’ annoyance.

Showing off his golfing skills in a new video, the 54-year-old revisited one of the character’s old feuds, declaring: ‘It’s been 25 years since I’ve done this, let’s see what happens. Shooter McGavin, this is for you.’

Of course, Shooter was played by Christopher McDonald, who certainly wasn’t going to let the challenge go unanswered.

The 66-year-old added: ‘Thank you to all the fans and thank you to you, Adam Sandler, and why don’t you just meet me at the ninth green at nine, Gilmore? Oh and Gilmore, wear something nice.’

The shade of it all.

Happy Gilmore, directed by Dennis Dugan, was released in 1996.

It was the first of the collaborations between Adam and Dennis, and was a box office success, earning $41.2 million (£29 million) on a $12 million (£8 million) budget. 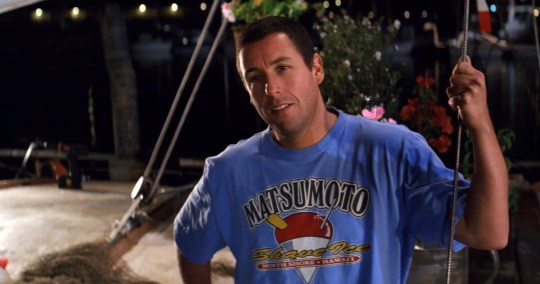 Meanwhile, 25 years on, Adam certainly hasn’t slowed down, with it being revealed late last year that Netflix users have ‘spent more than two billion hours’ watching his movies.

The actor famously signed a huge four-year-contract with the streaming service in 2017 and he’s certainly proving he was worth the money.

In that time he’s starred in Murder Mystery, The Ridiculous 6, Sandy Wexler, and Hubie Halloween.

The critics haven’t necessarily been fans of the films but viewers have tuned in all the same.

Meanwhile, he and Drew Barrymore recently teased their plans for a fourth movie together – so watch this space!