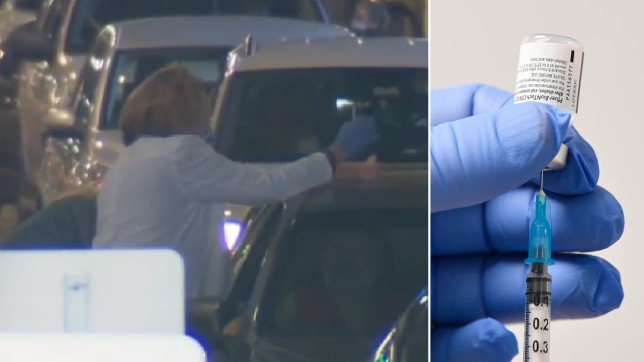 Two women aged 34 and 44 disguised themselves as bonnet-wearing graninies to get their Covid vaccines early (Pictures: WESH)

A pair of sneaky women aged 34 and 44 disguised themselves as elderly grandmothers to get their Covid vaccines early. The unnamed pair donned bonnets, gloves and glasses for an illicit trip to the Orange County Convention Center mass vaccination site in Orlando, Florida, on Wednesday.

The women were caught by staff who noticed that their given dates of birth were different to the ones they’d used to register for their injections online. But the pair were caught turning up for their second vaccine doses, meaning an earlier attempt at the same con may have been successful.

Dr Raul Pino, from the Florida Department of Health, said: ‘So yesterday, we realized a couple of young ladies came dressed up as grannies to get vaccinated for the second time.

‘I don’t know how they escaped for the first time, but they came vaccinated. The bonnets, the gloves, the glasses, and they were probably in their 20s.’

Officials confirmed that the women were older, according to WESH. But both were still decades younger than the 65 years-older and above rule currently in place for anyone who wants a Covid shot in their area.

Neither woman was charged over their deception, but both were fined for trespassing. Officials are trying to work out how they were able to get their first shot successfully.

Dr Pino said another man younger than 65 previously showed up with his elderly dad’s ID in a bid to get his shot early.

Security has been stepped up at the center, which vaccinates around 2,500 patients a day, to try and stop anyone else getting vaccinated before it is their turn.

Covid vaccines remain in short supply across the world, with many countries, including the US, only offering them to hospital staff, frontline workers, people with underlying illnesses and the medically vulnerably.

White House officials say supply could ease as early as April, making it easier for far more Americans to get the shots.

Jon Culshaw on why he’d ace Doctor Who role