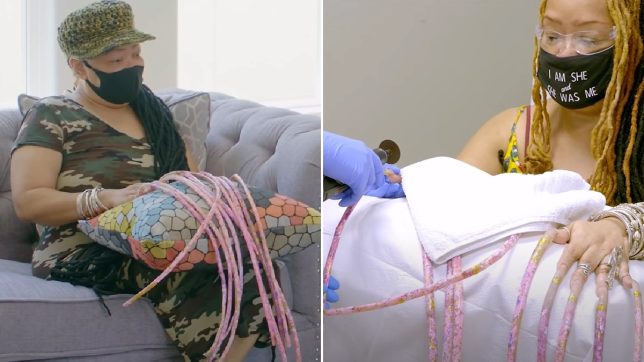 Ayanna Williams finally bid farewell to her record-breaking 24 foot-long nails over the weekend (Pictures: Ripley’s Believe It or Not!)

A woman whose 24 foot-long fingernails were the world’s longest has had them cut for the first time in 30 years – with the help of an electric saw. Ayanna Williams, from Houston in Texas, had her mammoth talons removed by dermatologist Dr Allison Readigner over the weekend.

They measured 24 feet 0.7 inches long at the time of their removal, and were last cut in the early 1990s. Prior to having her giant claws trimmed, a manicure took multiple days to perform, and required three or four bottles of nail polish to cover Ayanna’s nails.

Ayanna said she had ‘mixed emotions’ about having her nails cut off, and referred to them as ‘my babies.’ But she later told Ripley’s Believe It or Not!: ‘With or without my nails, I will still be the queen. My nails don’t make me, I make my nails!’

Ayanna won the Guinness World Record for the world’s longest fingernails in 2017, when they were ‘just’ 19 feet long. Her reign was uncontested until the recent beauty treatment.

Ripley’s Believe It or Not! will now display Ayanna’s old nails at its museum in Orlando, Florida. Ayanna says she plans to keep her nails a far more manageable six inches from now on.

Her old talons prevented her from completing basic tasks, including putting sheets on a bed and washing dishes.

Ayanna chopped her nails off before they’d become the longest of all time. That honor belonged to Lee Redmond, who grew hers to 28 feet between 1979 and 2009.

Lee, 80, lost her nails unexpectedly following a car crash, and spoke of her shock afterwards.

The grandma, from Salt Lake City, said her huge nails never stopped her from living her life as normal – and did not even cause issues while caring for her elderly husband, who has Alzheimer’s Disease.