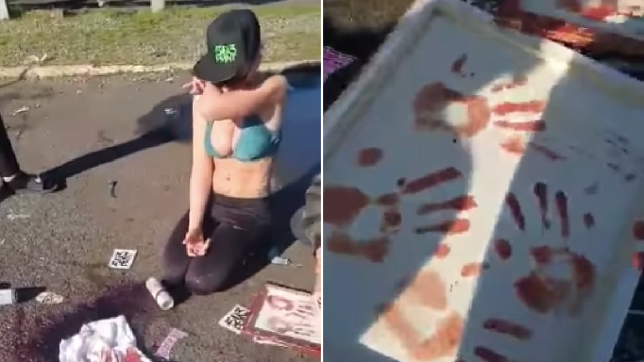 Melissa Moore used her shirt to mop up her murdered fiance Billy Peters’ blood, and says she will keep the stained clothing as a memento of her late ex (Pictures: KOIN)

This is the moment a grief-stricken woman removed her shirt to make keepsakes from her fiancé’s fresh blood after he was killed outside a strip club. Melissa Moore was filmed wiping-up Billy Peters’ blood on Tuesday, three days after he was gunned down outside a steakhouse strip club in Portland, Oregon.

The grieving woman took the bloodied shirt home as a souvenir of Billy, with loved-ones also making hand prints on canvases from his blood. Posting on Facebook after, Melissa explained: ‘This hurts so bad. I had to put his blood on my shirt and take it home with me forever.’

She asked for the deeply personal clip to be shared in a bid to shame her late partner’s killers, and encourage anyone with information to come forward. Melissa, who has a four year-old daughter with Billy, told KOIN: ‘I think nothing will probably come unless we keep pushing it like this.’

Billy, who owned a successful print shop, and his friend Adam Arrambide were both shot and killed outside the Acropolis restaurant and club on Saturday night. No further information on the shooting has been shared by police, and is it unclear if any suspects have been arrested.

But a GoFundMe page set up by Billy’s family say he was ‘an innocent bystander taking (sic) by the influx of gun violence that has been happening all around the Portland area.’

A tribute on the same page added: ‘He was an amazing friend to many people, loved by his daughter and his family unconditionally.’

Melissa said she and her fiancé had shared a worried conversation about the explosion in gun violence in their home city in the weeks leading up to his death.

The city has seen more than 170 shootings so far this year, compared to just 88 between January and the beginning of March 2020. 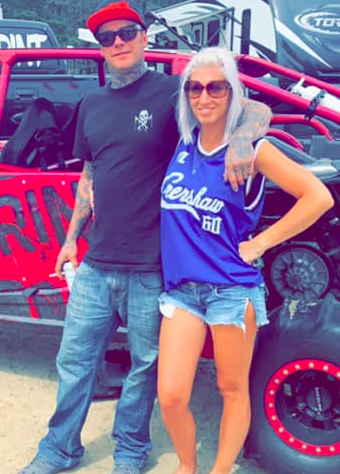 Melissa and Billy before his murder. The couple have a four year-old daughter (Picture: Facebook)

A total of 14 people have been shot dead in Portland this year, six of whom have been killed since last Thursday alone.

The city has also been roiled by nightly antifa protests against police brutality and President Biden’s immigration policies.