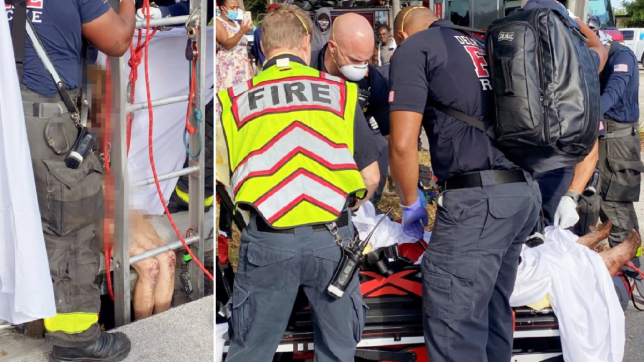 A woman claims she spent three weeks wandering a series of tunnels after going for a swim in a canal and getting lost (Pictures: Delray Beach Fire Rescue)

A 43 year-old woman says she spent three weeks naked and lost in a series of underground tunnels after going for a swim in a canal. The unnamed woman, who was finally, rescued on Tuesday, said her ordeal began in West Delray, Florida, on March 3 when she decided to open a door while swimming in a canal.

The woman – who was took weak to stand by the time she was saved – said the first tunnel led to another, then another, then another. She claimed to have quickly lost her bearings, and spent an extended length of time walking through the pipes in an attempt to find her way back out.

Salvation eventually came after the woman spotted light flooding through a hole in a drainage ditch, and walked over to it. She began screaming for help, and was eventually heard and rescued, according to the South Florida Sun Sentinel.

A crowd gathered to watch the woman being lifted out, and cheered when she was freed. Delray Police said the woman was found badly dehydrated, but lucid. A police report added that the woman has a history of mental health issues, drug abuse and making poor decisions while under the influence. 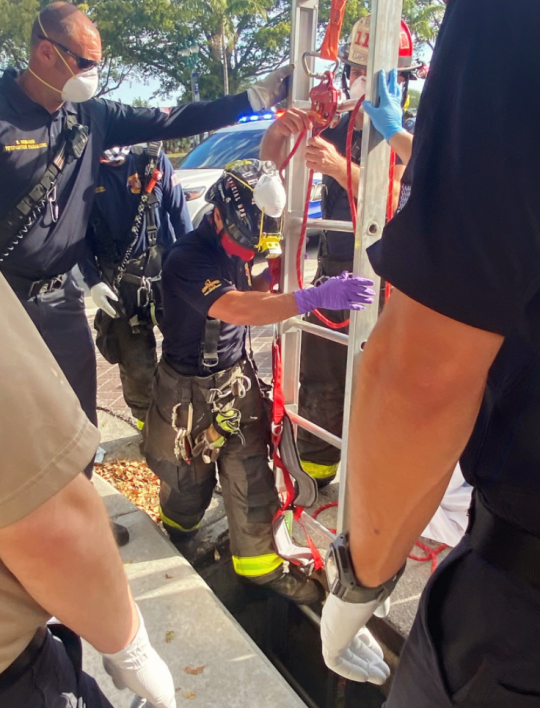 The unclothed woman was finally rescued on Tuesday after a passer-by heard her screaming for help from a storm drain opening (Picture: Delray Beach Fire Department)

It is unclear whether she was underground for as long as she had claimed, and what she had been eating or drinking while trapped.

Spokesman Ted White said: ‘She claims that she’s been in the storm drain for a significant amount of time. The biggest question is how long she has been in there, how did she get in there and why?

‘It’s pretty difficult to get into a storm drain where she was found. You’d have to pull up that huge heavy grate. This is one of the most bizarre situations our officers have ever experienced.’

White said he did not believe any crime had been committed, with officers now set to try and verify the woman’s claims about her ordeal.

She was taken to a local hospital for treatment, with no further updates given on her condition.