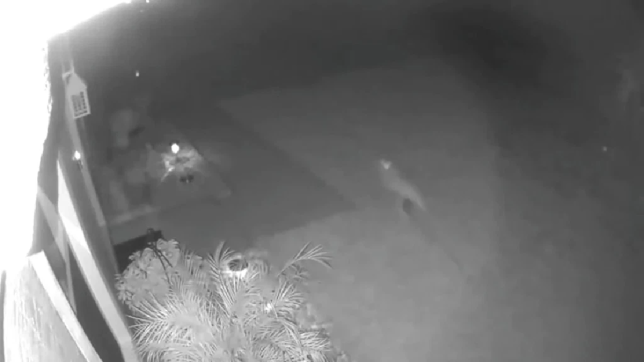 Christina Ryan believe a ‘baby dinosaur’ made an appearance in her back yard (Picture: FOX 35 News)

A woman says a ‘baby dinosaur’ ran through her backyard and believes she has video footage to prove it.

Cristina Ryan, from Palm Coast, Florida, thinks she filmed a velociraptor scampering through her garden in the middle of the night over the weekend.

Video footage of the apparent prehistoric creature shows what appears to be a two-legged animal with a long reptile-like tail dashing through Ryan’s yard at around 3:40am on Saturday, reports FOX 35.

The clip has become an internet sensation as social media users struggle to work out what exactly Ryan’s security cameras captured.

But for homeowner, Ryan, she said she’s convinced that was she saw was a Jurassic animal.

Ryan said: ‘Any animal we can come up with that would be ‘walking’ at 3:40 in the morning, wouldn’t walk this way.

‘Maybe I’ve watched Jurassic Park too many times, but I see a raptor or other small dinosaur.

‘Some say a large bird, but that makes no sense, since whatever it is appears to have front legs.  So not sure?

‘I’m sticking with raptor myself.’ 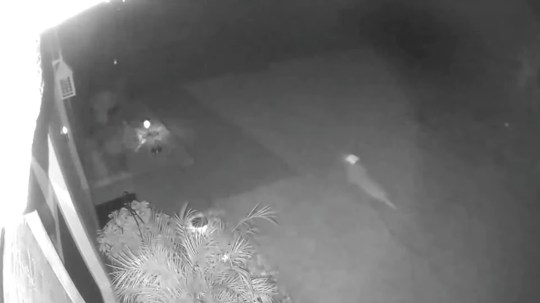 The unidentified creature was spotted in the backyard of a home in Palm Coast, Florida (Picture: FOX 35 News) 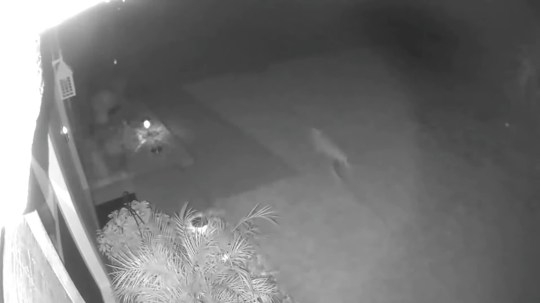 The homeowner believes it was a ‘baby dinosaur’ (Picture: FOX 35 News)

The footage, which only briefly captured reptilian-like creature, has taken social media by storm as people speculate as to what the animal could be.

Some people believe it was likely to be some sort of lizard, or even a dog.

‘Looks like a Komodo dragon or some type of lizard’, one person wrote.

‘That is a dog wearing a harness dragging a leash. You can see all four legs and the harness and leash dragging behind it’, another commented.

Another person wrote on Facebook that it ‘could be a monitor lizard or iguana.’