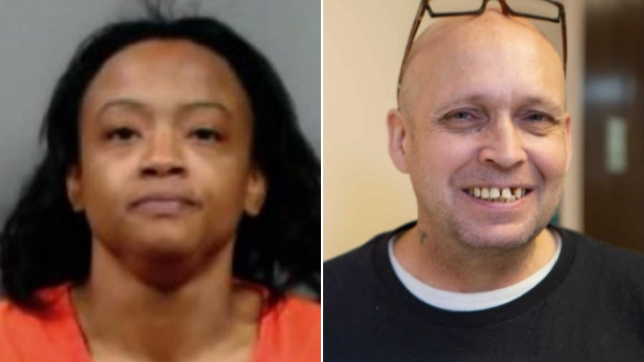 Charity Blackmon, left, allegedly knocked cyclist Merill Rabus, right, off his bike – then got out of her car and shot him dead, police say (Pictures: KSN)

A woman knocked a cyclist off his bike with her car, then got out of the vehicle and struck him dead, police say. Charity Blackmon, 31, is accused of killing Merrill Rabus, 54, on Friday after smashing into him as he crossed an intersection in Wichita, Kansas. She did not know her alleged victim, police say.

After knocking Rabus off his bike, Blackmon allegedly got out of her white Plymouth van, pulled a gun on the cyclist as he lay on the ground, then fired a single shot. That bullet hit Rabus.

He was rushed to hospital by paramedics, but died shortly afterwards, with Blackmon charged with first-degree murder on Saturday.

Blackmon is said to have fled the scene after the incident, with eyewitnesses giving police information that helped them track her down.’ She is now in jail ahead of her next court hearing. Police have yet to share a possible motive for the murderous hit and run incident.

Rabus’s friends told Kansas.com that the late cyclist successfully turned his life around in the mid-2010s after previously battling homelessness, drug addiction and stints in jail.

Rabus himself spoke about his epiphany during an interview with Christian missionary publication Union Pure Mission, and said it happened while he was in his jail cell.

The victim’s former stepdaughter Melisha Oakleaf-Wilson said Rabus had been ‘awesome’ even after splitting with her mother, who later died.

And Rabus’s friend Travis Cox also paid tribute to the murder victim’s kind nature, saying: ‘Everything he would get, he would give it away.’

Does Bill Maher have a wife?