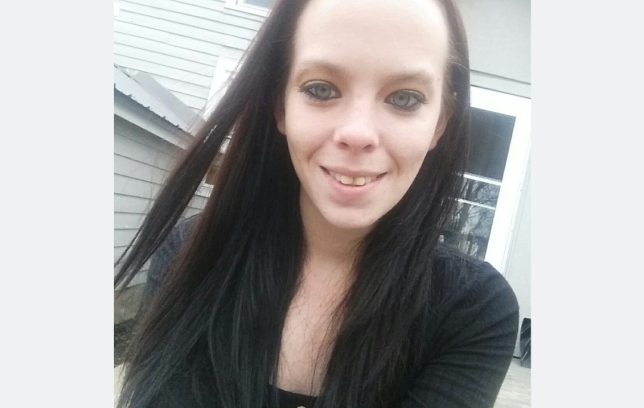 Nicole Holland is said to have let a puppy take heroin – then filmed as it overdosed and died (Picture: Facebook)

A mother of two let a puppy lick heroin off a pink plate – then filmed him as his stomach began to bloat and he died of an overdose, police say. Nicole Holland allegedly allowed the six week old Doberman Pinscher, named Champ, to take the drug after she set the plate containing it down on the floor.

Holland, from Fulton in New York, then snorted some of the drug through a straw, according to police. She said Champ began to walk strangely, so Holland got out her phone and began filming the pup instead of seeking help. Holland said Champ’s stomach began to bloat, and that he struggled to breathe.

She then decided to push down on the puppy’s belly, and made him throw up, it is alleged. Holland said that intervention made the puppy start breathing again, so she decided to wait until the next day to take him to the vet. He died shortly afterwards.

Holland was arrested after the video of Champ in distress began circulating on social media. She told cops that she had not injected the dog with the drug, and that she did not mean to hurt him. A subsequent necropsy found the puppy, who weighed eight pounds at the time of his death, had died of a drug overdose.

New York State Police and Oswego County Sheriff’s Office have since charged Holland with misdemeanor animal cruelty. They were unable to charge her with a drugs offense, because no-one witnessed her take the drugs, according to CNY Central.

Holland is currently free, ahead of her next court appearance on April 6. She has previous arrests for drugs possession and larceny.