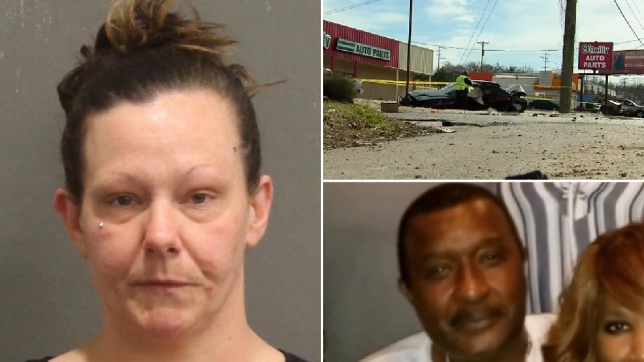 Katrina Russell, main photo, allegedly sold a car to a boy she knew was just 13, with the boy then crashing into David Cheatham, 71, and killing him (Pictures: WSMV)

A woman sold her car to a boy she knew was 13 years-old, with that teen then crashing and killing an elderly man, police say. Katrina Russell was arrested last Monday over claims she sold her Dodge Dart to the unnamed youngster for $80 on March 5.

Shortly afterwards, the boy slammed into a Dodge Challenger while driving between 90 and 100mph and running a red light, police say. That smash killed the driver of the Challenger, 71 year-old David Cheatham. Cheatham was waiting to pull out of a parking lot when his car was struck, with the vehicle catching fire.

The 13 year-old boy survived with serious leg injuries. Footage of the collision showed the teen losing control of his car moments before it slid sideways into Cheatham’s Dodge and pushed the victim’s car into a tree. The 13 year-old boy has been charged with vehicular homicide, with Russell now also charged with the same offense over her alleged sale of the vehicle to an underage driver.

Police began working to find where the boy’s car had come from after discovering it had not been stolen. Russell was later found living in a squat, it is alleged, and is said to have claimed she was there to help a friend paint the property.

She is said to have admitted handing over the keys of the Dodge to the boy despite knowing how old he was, according to ABC7. Russell is also charged with contributing to the delinquency of a minor, with her bail set at $6,000.

Cheatham was a much-loved dad and grandfather, who had been married to his wife Jenice for 53 years. The couple’s granddaughter Dia Mimms said: ‘Our dad was the healthiest 71-year-old man you would have ever met.’