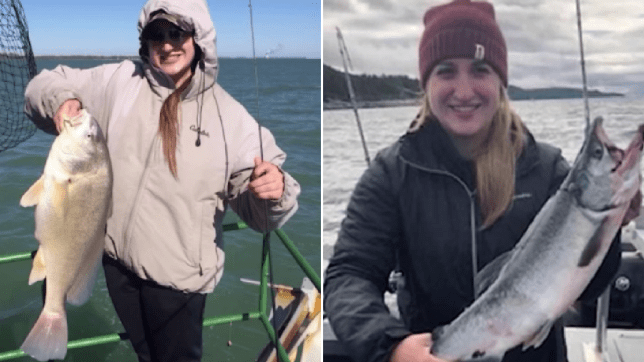 Emily Smaniotto was banned from a fishing trip she won a place on because it was men only, and then told the church running it was worried about possible sexual assault allegations

Two women were banned from attending a church fishing trip they both won places on over fears they’d make a #MeToo sex assault allegation.

The Bethel Baptist Church in North Union Township, Pennsylvania, sparked outrage after barring Emily Smaniotto and another unnamed woman from going on a bow fishing trip both women won at a raffle.

Church Reverend Bryan Kelley then said it was because of their gender, and spoke of his fears of a possible sexual assault claim if women were allowed on the trip.

Emily, who won the prize at a Wild Game Dinner on Sunday, said: ‘They pretty much scolded us for being female. (The other woman) was the first name to be called. As soon as they called her name the pastor immediately shut her down.

‘He said, “Absolutely not. This is a male-only trip. Females are unable to attend so we’re just gonna keep drawing names until we get a male.” So, surprisingly enough my name was the second one to be drawn and I got the same letdown.’

Emily was stunned by the church’s sexist attitude. She was told the trip was for men only before entering, but assumed that was a joke, and entered anyway on seeing the other woman do the same.

Meanwhile, Bethel Baptist Church risked further outrage after claiming women had been banned from the trip over #MeToo era fears. Reverend Bryan Kelley said: ‘The church gives away door prizes every year which are available to all in attendance so long as they are of legal age and no criminal record in the case of a firearm.

‘Aside from what the church offered, the speaker on his own offered separate gifts apart from the church for men only and made it clear that was the stipulation.

‘Living in the days of sexual scandals and accusations many pastors including myself, take the personal position that we will not put ourselves in a position that could bring about a false accusation and thus bring a multitude of problems, hence why he personally offered them for men only.’

Kelley insisted there was ‘no intend of discrimination’ and said he had tried to apologize to Emily, but had not heard back from her.

The reverend said the prize donor had also offered to organize a fishing trip for Emily and her father by way of apology.

But those gestures cut no ice with the furious outdoorswoman – who also took exception to the remark about sexual assault claims.

Emily told ActionNews4: ‘I absolutely will not partake in any fishing trips with anyone from that church. I was denied once and don’t want a pity prize.

‘I want equal rights. As a response to his statement: They’re implying that women will always accuse them of sexual scandals.

‘If they were afraid of this, maybe they should have made it a rule that more than one woman has to attend the trip, to even the numbers so to speak, to prevent this, but they didn’t.

‘They strictly kept it to only men and that was their “personal choice.” It was not even an option to discuss the trip details if a female would have won. I would do anything possible to attend a trip like this.”

“It was very very wrong. I’m sorry I had to sit through that.’