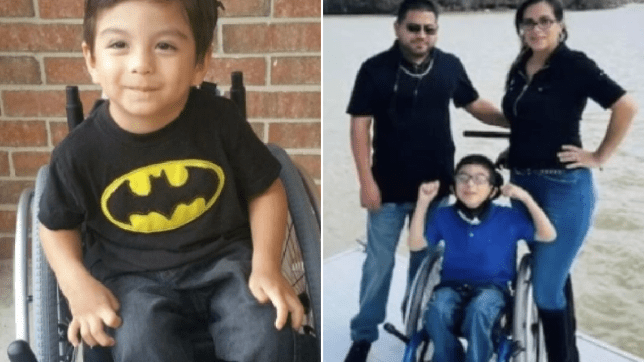 Seven year-old Michael Martinez, who has cerebral palsy, crawled to wake his sleeping parents after hearing an alarm go off, which was warning of a carbon monoxide leak (Pictures: GoFundMe/Fox News)

A seven year-old boy with cerebral palsy was hailed a hero for crawling to alert his family to a deadly gas leak that would have killed them. Michael Martinez, who uses a wheelchair, crawled to his sleeping parents’ bedroom at their home in Aledo, Texas, last Thursday after he heard an alarm go off downstairs.

The youngster’s three cousins and aunt were also slumbering when Michael heard the unusual beep four times in a row. He woke his mother Angie Martinez, who initially thought her smoke alarm must have needed a new battery.

But she and her husband quickly realized that the sound was coming from their carbon monoxide alarm, indicating high levels of the killer gas in their home. Angie quickly Googled what the four beeps meant, and was terrified to discover it signaled a critical level of the poison in her home.

She also called a helpline, who advised her to open all her windows wide. Angie quickly roused her loved-ones, with the family rushing outside before even putting her shoes and socks on. 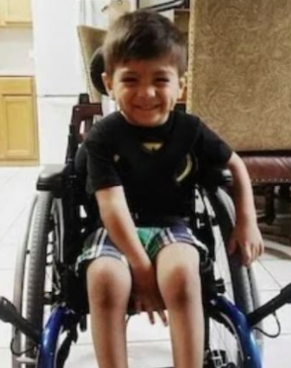 Michael’s family ran outside after he woke them, and are convinced he saved their lives (Picture: Fox News)

She told Fox News that she was ‘feeling very sick and nauseous,’ by the time she got fresh air, and that her sister was experiencing chest pains.

Hailing Michael’s efforts to alert his family, she added: ‘We told him that he is our hero. If it wasn’t for him, we probably never would have woken up.’

The Martinez’s subsequently discovered that the gas had begun to build up after they accidentally left one of their stove burners on, causing carbon monoxide to build-up.

The gas does not have a scent or taste, and starves the human body of oxygen if present in high quantities.

News of Michael’s heroism has now gone nationwide, with a fundraising effort now underway to buy him a wheelchair.