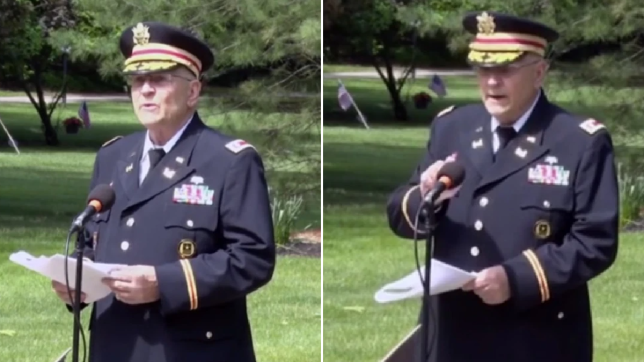 Barnard Kemter, 77, a US Army veteran, was a keynote speaker at a Memorial Day ceremony in Ohio (Picture: The Washington Post)

An American army veteran had his mic deliberately cut as he spoke about black history during a speech on Memorial Day.

Retired lieutenant colonel Barnard Kemter was midway through his speech at a ceremony in Ohio when he started discussing the freeing of enslaved black people and the role it played in American history.

His speech was largely about honoring America’s Civil War dead but as Kemter moved on to talk about black history, the 77-year-old’s microphone was cut off.

In video footage Kemter can been seen tapping the mic a few times before shouting for help when it became unresponsive.

‘I assumed it was a technical glitch’, Kemter told The Washington Post. He carried on with his speech regardless without the help of the mic, and later learned that the loss of audio was not a glitch, but a deliberate act.

One of the event’s organizers later admitted that the audio had been turned down on purpose, telling the Akron Beacon Journal that Kemter’s words on black history were ‘not relevant to our program for the day’.

‘We asked him to modify his speech, and he chose not to do that’, said Cindy Suchan, president of the Hudson American Legion Auxiliary.

The Ohio American Legion has since announced an investigation into the reasons for why Kemter was ‘censored’, as he described it.

‘I was very disappointed that someone would choose to censor my speech’, Kemter told The Post.

Kemter, from Hudson, Ohio, was trained as a combat medic and served in the Army from 1965 to 1995. He was invited to the event, held in a cemetery, by Suchan as a keynote speaker. 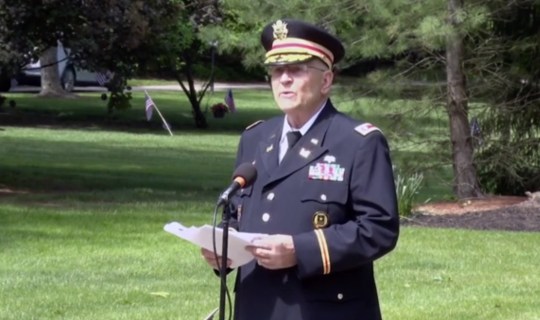 He claims Suchan did not give him any writing prompts and did not say any topics were off-limits. Kemter said he decided to use this year’s speech as an ‘educational’ opportunity to discuss the history of Memorial Day.

He said: ‘Throughout history, there has been a lot of claims about who actually performed the first Memorial Day service.

‘With this speech, I chose to educate people as to the origin of Memorial Day and why we were celebrating it.’

Kemter’s speech included details about a Memorial Day commemoration in Charleston, South Carolina, that was organized by a group of black people who had been freed from enslavement less than a month after the Confederacy surrendered in 1865.

About three days before his speech, he emailed a draft copy of his speech to event organizers and one organizer apparently responded by asking Kemter to revise his speech and ‘leave out the part of history of it’.

The organizer, whom Kemter declined to name, didn’t specify which paragraphs they wanted removed or why they objected, he said.

As a result Kemter arrived at the Markillie Cemetery on Monday ready to deliver the unedited version speech to a crowd of about 300 people.

Kemter began his speech by talking about how Memorial Day was created after hundreds of thousands of soldiers who died in the American Civil War were in need of a proper burial place. Then, soon after he began discussing the role that black Charleston residents played in the holiday, his microphone stopped working.

When his calls for help fell on deaf ears, ‘I decided, I don’t need a microphone’, Kemter said. 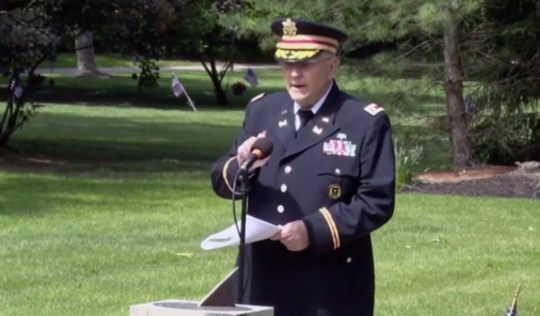 Kemter’s mic stopped working when he spoke about the importance of black history in the US (Picture: The Washington Post)

Kemter’s audio did come back on minutes later just after he had finished discussing the black history related to Memorial Day.

Then, after the event, the audio engineer approached Kemter to tell him that it was not a malfunction and it was the event organizers who intentionally muted him, he said.

Kemter said he didn’t want a confrontation with organizers, so he left the cemetery without speaking to them.

On Wednesday, Suchan confirmed to the Beacon Journal that either she or Jim Garrison, the adjutant of American Legion Lee-Bishop Post 464, had turned down Kemter’s mic because the ‘theme of the day was honoring Hudson veterans’.

Suchan confirmed that event organizers had asked Kemter to revise his speech.

In announcing its investigation, the Ohio American Legion said: ‘We take this matter and its allegations seriously. We will investigate and take disciplinary action if necessary.’

Kemter said that despite the microphone issue, he has received many messages of congratulations for his speech.

‘A lot of people viewed this as a healing speech and paying a tribute to the African Americans that started Memorial Day’, he said.

Can you get a refund for your Portugal holiday now it’s on the amber list? We explain