The high speed car was racing up an airstrip when the driver lost control and smashed into the crowd (Picture: Jim Lefko)

Two children were killed after a drag racer lost control and smashed into a crowd of spectators.

The Texas car event turned into tragedy when a high-powered car left the track at high speeds, ploughing into the crowd.

A 46-year-old woman is also in a critical condition, with seven more injured.

The two boys who died at the Kerrville-Kerr County Airport event were aged six and eight.

Vehicles can travel at well over 100mph, despite only covering about one eighth of a mile.

Onlookers were able to get within 15ft of the strip and were sitting on plastic garden chairs, according to a report.

Around 3,500 people had gathered to watch the event, which took place about 60 miles north of the town of San Antonio.

A four-year-old boy and a three-month-old girl were taken to a hospital for precautionary examinations. 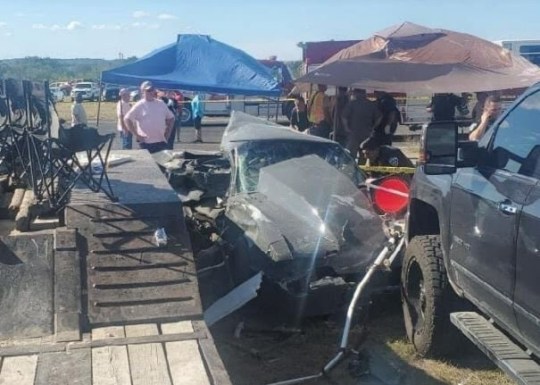 The twisted wreck of the car which hit spectators was pictured after the event (Picture: Jim Lefko)

Kerrville police said the driver ‘lost control and left the runway, crashing into parked vehicles and striking spectators who were observing the races’.

The Kerrville Convention and Visitors Bureau’s website promoted the event as an ‘action-packed, family-friendly day’ in which fans could watch the ‘fastest drag cars compete for over 8,000 dollars in total prizes’.

Water-filled plastic barriers lined the course but one witness said they did not extend past the finish line, leaving no protection between spectators and cars as they were slowing down at the end of the race.

Organisers reminded people to stay on the grass and off the asphalt, a journalist in attendance told the Associated Press.

The driver was nearing the end of the strip when the car veered off course, he added.

Tesco website and app down after ‘interference by hackers’