Roe v Wade, which gave Americans the right to abortion in the first trimester of pregnancy, was overturned by the Supreme Court on Friday (Pictures: AP)

Half a century of guaranteed abortion rights in the US has come to an end Friday, as the Supreme Court overturned the landmark Roe v Wade decision.

The court ruled in favor of the state of Mississippi in the case of Dobbs v. Jackson Women’s Health Organization, allowing the state to ban most abortions after 15 weeks of pregnancy, and effectively striking down the court’s 1973 ruling in Roe that legalized abortion nationwide.

SCOTUS’s decision to overturn Roe comes as no surprise after a draft opinion written by Justice Samuel Alito was leaked and published by Politico in May.

Alito, in the final opinion issued Friday, wrote that Roe and Planned Parenthood v. Casey, the 1992 decision that reaffirmed the right to abortion, were wrong and must be overturned.

‘The Constitution makes no reference to abortion, and no such right is implicitly protected by constitutional provision,’ Alito wrote. 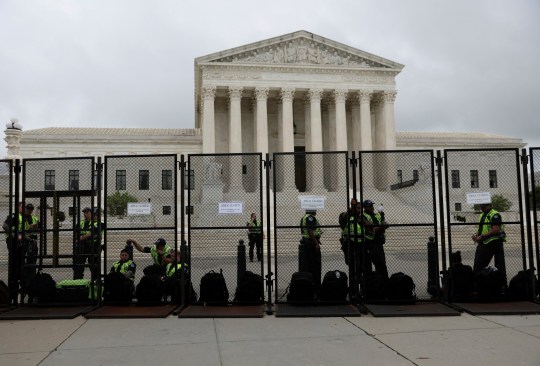 ‘Roe was egregiously wrong from the start,’ Alito wrote in his majority opinion. ‘Its reasoning was exceptionally weak, and the decision has had damaging consequences. And far from bringing about a national settlement of the abortion issue, Roe and Casey have enflamed debate and deepened division.’

The consequential decision will transform the landscape of women’s reproductive health in America, making abortion rights be determined by states, unless Congress acts. It’s also expected to disproportionately affect minorities and people of color, who already often face limited access to healthcare.

In a joint dissenting opinion, Justices Stephen Breyer, Sonia Sotomayor and Elena Kagan criticized the majority, writing in closing: ‘With sorrow — for this Court, but more, for the many millions of American women who have today lost a fundamental constitutional protection — we dissent.’ 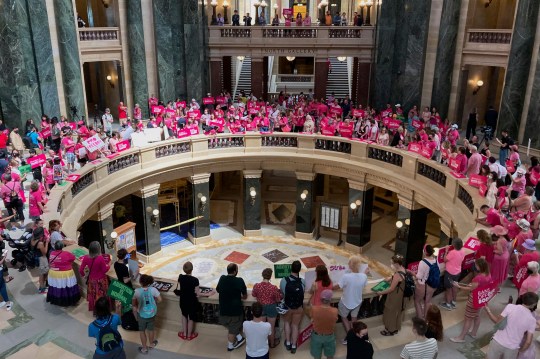 ‘After today, young women will come of age with fewer rights than their mothers and grandmothers had,’ Breyer wrote. ‘The majority accomplishes that result without so much as considering how women have relied on the right to choose or what it means to take that right away.’

With Roe overturned, individual states are responsible to determine how they will regulate abortions.

Thirteen states have so-called trigger laws in place that take immediate effect once Roe is struck down that ban or severely limit access to abortion, and another half-dozen states have near total bands after six weeks of pregnancy — long before many people know they are pregnant.

Alternatively, 16 states and the District of Columbia have passed laws protecting the right to have an abortion even without Roe.

With the high court preparing to break for recess, a decision has been expected but didn’t come on Tuesday or Thursday, when nine other opinions were released. The court added an additional day to its schedule to release opinions on Friday.

Supreme Court decision terms begin in October and last through the end of June or early July, and the biggest cases are typically saved for the very end. 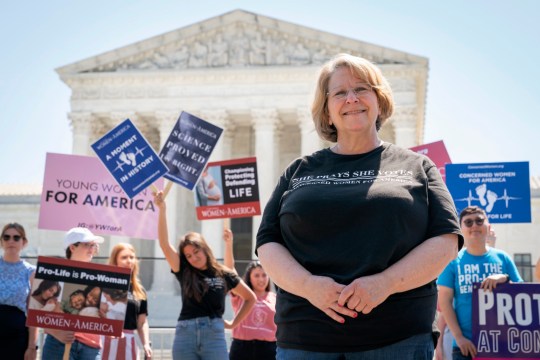 Following the leak, President Joe Biden released a statement saying he believes a woman’s right to choose is ‘fundamental.’

‘Roe has been the law of the land for almost 50 years, and basic fairness and the stability of our law demand that it not be overturned,’ Biden said.

The President is said to be considering several measures in response, including eliminating barriers to accessing medication abortion and challenging state laws that criminalize people who travel to a different state to receive an abortion.

This week, Vice President Kamala Harris met with reproductive rights leaders to discuss the consequences of striking down Roe.

‘If Roe is overturned, I believe that states will then have the power to interfere in personal decisions,’ Harris said, adding that if states have determined that life begins at fertilization that could restrict access to vitro treatments and contraception.

She added that striking down Roe ‘could clear the way for challenges to other fundamental rights,’ including same-sex marriage.

This is a breaking news story, check back for updates…