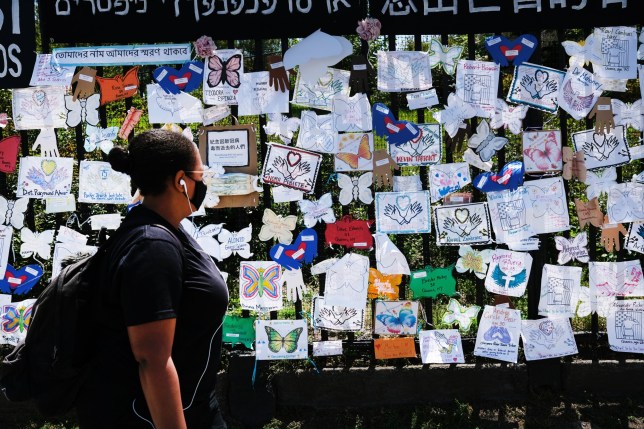 The suicide rate in the US dropped nearly 6% in the midst of the coronavirus pandemic (Picture: Getty Images)

The United States has experienced its largest dip in suicides in at least four decades – even in the midst of the unprecedented, ongoing coronavirus pandemic.

Suicide numbers dropped nearly 6% in 2020, preliminary government data showed on Thursday. Though more death certificates are due to be reported, experts believe that the figure will remain lower than prior years. That runs counter to concerns that Covid-19 would prompt more people to kill themselves.

While it is difficult to pinpoint the exact reason that suicides fell as much as they did, one factor appears to be a ‘heroism phase’ seen in the early stages of national disasters and wars.

‘We’re banding together and expressing lots of messages of support that we’re in this together’, explained Dr Christine Moutier, the American Foundation for Suicide Prevention’s chief medical officer. ‘You saw that, at least in the early months of the pandemic’.

Moutier added that the suicide rate may have remained lower also due to intentional efforts like more telehealth services.

The US’s suicide number fell slightly in 2019 to below 45,000, after a steady rise from the early 2000s to 2018, according to a recent Centers for Disease Control and Prevention (CDC) report. It is the lowest suicide deaths figure since 2015. The nation’s highest suicide rate in recent history was in 1941, in the middle of World War II.

In 2020, the country’s suicide rate fell the most in the spring, when the coronavirus became widespread and caused an economic shutdown, according to Farida Ahmad, the lead author of the CDC report. Many Americans suffered from depression and anxiety and consumed alcohol and drugs. In addition, firearm sales increased 85 percent in March.

But Moutier warned that Americans could experience a delay in poor mental health.

‘There’s sort of an evolution of mental health distress’, she said. ‘It’s possible we will see the whole mental health ramifications of this pandemic’ in the future.

For 24/7 confidential emotional support, contact the National Suicide Prevention Lifeline on 1-800-273-8255 in the US. For the UK contact Samaritans on 116123 or visit a local Samaritans branch, see www.samaritans.org for details.