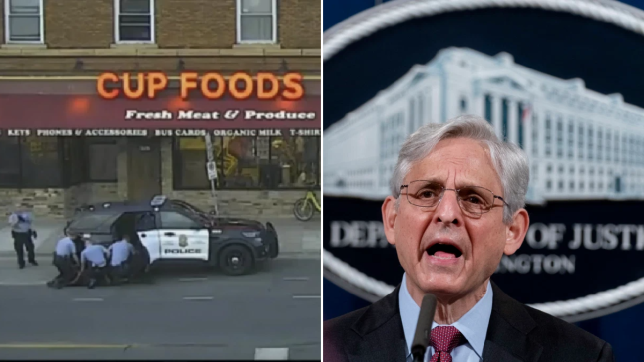 Attorney General Merrick Garland, right, announced an investigation on the Minneapolis Police Department after George Floyd was killed during an arrest on May 25, left (Pictures: AP/Reuters)

The Department of Justice launched an investigation into the Minneapolis Police Department’s practices a day after former officer Derek Chauvin was found guilty of murdering black man George Floyd.

Whether the law enforcement agency engages in policing patterns that are unconstitutional is at the center of the probe, Attorney General Merrick Garland said on Wednesday. The investigation will go further than a separate probe into Floyd’s killing.

‘Yesterday’s verdict in the state criminal trial does not address potentially systemic policing issues in Minneapolis’, Garland said. ‘Building trust between community and law enforcement will take time and effort by all of us. But we undertake this task with determination and urgency, knowing that change cannot wait’.

The federal probe will look into whether Minneapolis cops use excessive force in protests and other situations, and if they exhibit discriminatory conduct or treat people with behavior health problems the inappropriately. In addition, it will explore whether the department is holding officers accountable to a proper level.

‘I strongly believe that good officers do not want to work in systems that allow bad practices’, Garland said. ‘Good officers welcome accountability because accountability is an essential part of building trust with the community and public safety requires public trust’.

The wide-ranging probe will be handled by the Justice Department’s civil rights division and the US attorney’s office in Minnesota. Justice Department officials have already started contacting community groups for interviews on their interactions with Minneapolis cops.

Minneapolis police are under scrutiny after Chauvin knelt on Floyd on the street for more than nine minutes while he was handcuffed and repeatedly said, ‘I can’t breathe’. A 12-person jury on Tuesday afternoon found Chauvin guilty of second-degree unintentional murder, third-degree murder and second-degree manslaughter.

Garland’s announcement signaled his intent to enforce civil rights laws as thousands of Americans have taken to the streets in recent months protesting police brutality.

‘I know that justice is sometimes slow, sometimes elusive and sometimes never comes’, Garland said. ‘The Department of Justice will be unwavering in its pursuit of equal justice under law’.