Members of Taliban taking control of the presidential palace in Kabul after Afghanistan’s president flew out of the country (Picture: AFP)

The US could recognize the Taliban as Afghanistan’s true government – but only if the militants respect human rights and ‘doesn’t harbor terrorists’.

Speaking on Monday, spokesperson for the US State Department, Ned Price, said that the door was open for America to work with the Taliban as Afghanistan’s governors in the future.

He did say, however, that can only happen if the Islamist group allows women to be a part of their government and if women in the country are given the same rights as men.

During the Taliban’s rule of Afghanistan between 1996 and 2001, the group enforced draconian restrictions on women, forcing them to be fully veiled and severely restricting their movements.

On Sunday the Taliban took over Kabul after conquering large parts of the rest of Afghanistan following the US and UK’s military withdrawal from the country. The militants managed to overthrow the government within a matter of days following two-decades of military involvement from western forces.

Joe Biden and US officials had hoped that the Afghan forces would have been capable of fending off any advances from the Taliban – but instead the army quickly surrendered to the militants.

In July, as the Taliban took control of the city of Kandahar, nine women working at an Azizi Bank were told to leave and send male relatives to do their jobs instead, Al Jazeera reported, prompting re-occuring fears of how the Taliban will treat women in the country.

Yet on Monday Price said the US wants to see the conditions of a United Nations declaration met, which demanded women be allowed in government in Afghanistan.

The UN is calling for ‘an immediate cessation of all hostilities and the establishment, through inclusive negotiations, of a new government that is united, inclusive and representative – including with the full, equal and meaningful participation of women’. 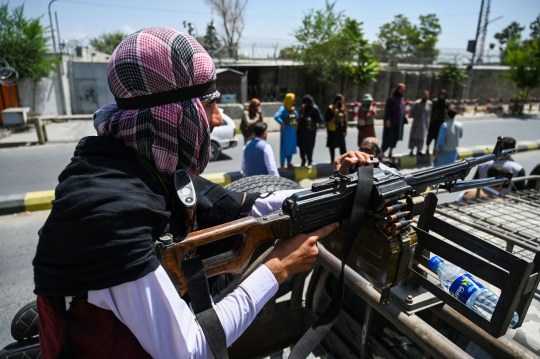 A Taliban fighter mans a machine gun on top of a vehicle as they patrol along a street in Kabul on August 16, 2021 (Picture: AFP) 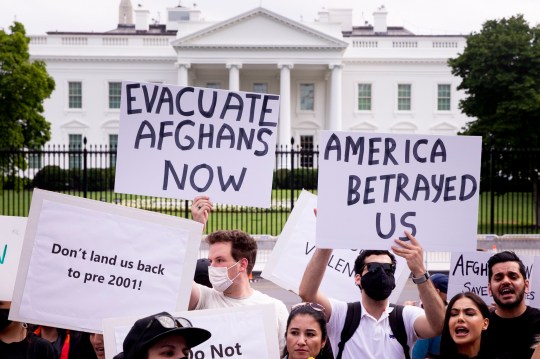 People protest in support of Afghanistan and against the Taliban take over of the country, at Lafayette Square, across the street from the White House in Washington, on August 15 2021 (Picture: EPA)

Price said that the US government would recognize a potential new government of Afghanistan so long as that government was inclusive.

Price did not outline how the Taliban could convince the US government that it has reformed itself in this way, or why he thought the Taliban would change their ideology.

He also said that the US had fulfilled the objective of the 2001 invasion – which set out to ‘decimate the network that conceived of and launched’ the 9/11 attacks.

While the Taliban has taken the presidential palace in Kabul, forcing the country’s president Ashraf Ghani to flee the country, Price insisted that ‘there has not yet been a formal transfer of power’. 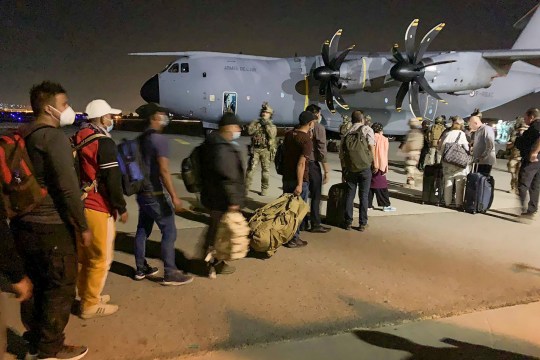 Many Afghans have been evacuated from the war-torn country in recent days (Picture: AFP)

‘The situation will continue to remain fluid in the coming hours and likely the coming days’, he said.

‘Nevertheless we are operating on all fronts and around the clock to protect our people, those who have worked side by side with the United States for years, and other vulnerable Afghans’, Price added.

He said the safety and security of American diplomats ‘will remain our top priority’.

Price said that Anthony Blinken, the Secretary of State, spoke with diplomats from Russia, China, Pakistan, Britain, NATO, Turkey, and the European Union.

He said that the US negotiator on Afghanistan, Zalmay Khalilzad, remained in the Taliban’s diplomatic base of Qatar and that US officials have been in talks with the militants in the Gulf state.

Joe Biden has deployed 5,000 marine and army reinforcements to Kabul to secure the airport for an evacuation of thousands of US citizens still in Afghanistan, and Afghans who worked with Americans and are eligible for special visas.