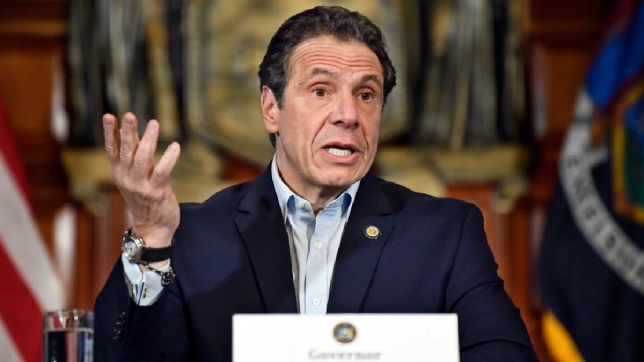 An investigation into the conduct of governor Andrew Cuomo, 63, is now underway in New York city (Picture: AP)

A top US politician lauded for his handling of the Covid crisis has been accused of sexually harassing three different women.

Governor of New York State Andrew Cuomo is being investigated by the city’s independently elected attorney general, Letitia James, after two separate women have come forward claiming he harassed them in a sexual manner.

A third woman, Anna Ruch, 33, may also be involved in the case after claiming she is also an alleged victim of Cuomo.

She spoke out publicly yesterday and has accused the governor of touching her face and back, and asking to kiss her moments after they met at a wedding reception in 2019, The New York Times reports. 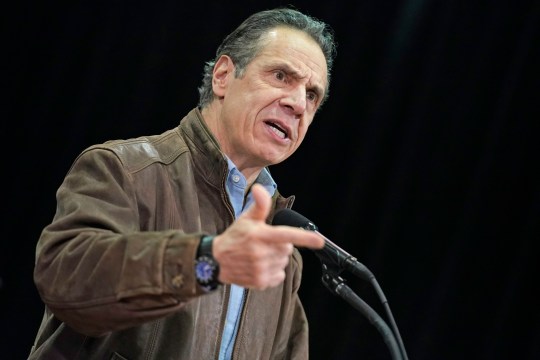 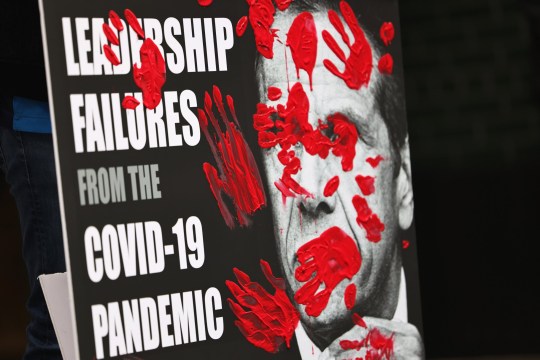 A poster of Gov. Andrew Cuomo’s book is seen covered in red painted hands as people gather outside of his NYC office to protest against cuts to health care on March 1, 2021 (Picture: Getty)

A photo published in the New York Times shows Cuomo grasping Ruch’s face with both hands while she appears to have a surprised look on her face.

Ruch told the NYT: ‘I was so confused and shocked and embarrassed’

‘I turned my head away and didn’t have words in that moment.’

The claims from Ruch, who worked as a photographer at the White House during President Barack Obama’s second term, come after another woman has also accused Cuomo of touching her without permission. 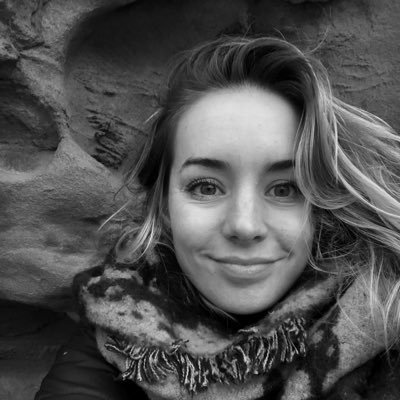 The allegations about Cuomo have led to calls for Cuomo to step down, including from some people in the Democrat’s own party.

Cuomo has been married once, to human rights activist Kerry Kennedy, 61, but the couple divorced in 2005 following a 15-year marriage. He also had a 14-year relationship with Food Network chef, Sandra Lee, but after the pair split up in 2019 Cuomo is believed to be single.

Meanwhile, Governor Cuomo’s former aide, Charlotte Bennett, has accused him of sexual harassment and has moved to condemn him as a manipulative predator.

She also rejected an attempted apology from Cuomo in which he labeled his behavior as ‘playful’.

Bennett, a low-level aide in the governor’s administration until November, said Cuomo asked questions about her sex life, including whether she ever had sex with older men, and made other comments she interpreted as asking her interest in an affair.

The 25-year-old said: ‘The governor has refused to acknowledge or take responsibility for his predatory behavior. 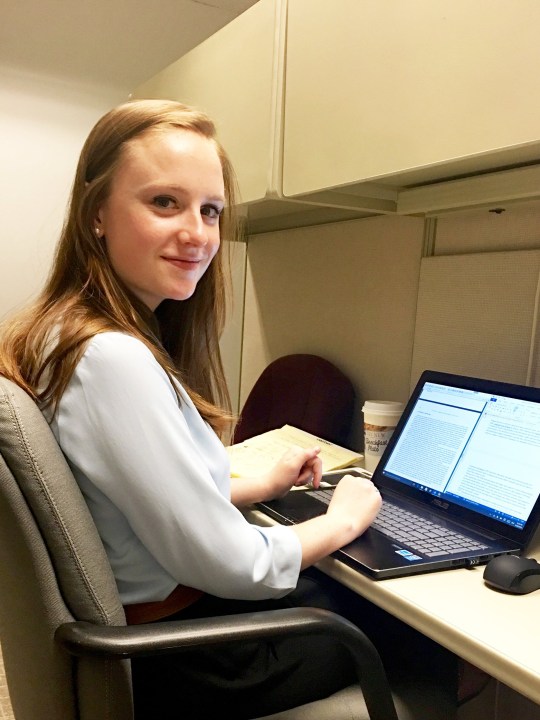 Charlotte Bennett, who is also accusing Gov. Andrew Cuomo of sexual harassment, is seen in a photo posted by Hamilton College in a profile involving her work helping survivors of sexual violence (Picture: Hamilton College)

‘As we know, abusers – particularly those with tremendous amounts of power – are often repeat offenders who engage in manipulative tactics to diminish allegations, blame victims, deny wrongdoing and escape consequences.

‘It took the governor 24 hours and significant backlash to allow for a truly independent investigation. These are not the actions of someone who simply feels misunderstood; they are the actions of an individual who wields his power to avoid justice.’

Her statement, which she made yesterday, came as New York’s independent attorney general, Letitia James, said she was moving ahead with an investigation into the sexual harassment allegations against Cuomo. At the minute, she plans to focus on allegations made by Bennett and another woman, former aide Lindsey Boylan.

Boylan, a former economic development adviser, first made harassment allegations in December but has elaborated on those claims in recent days. She said Cuomo subjected her to an unwanted kiss and comments about her appearance. 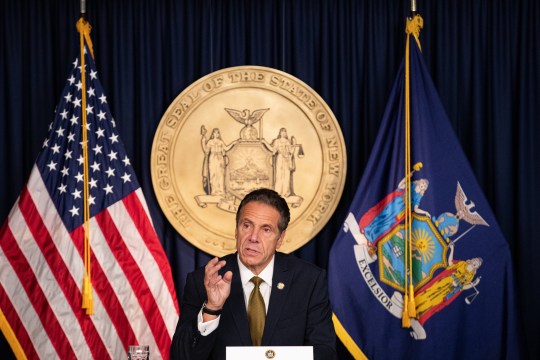 Cuomo has said he will cooperate with the investigation (Picture: Bloomberg via Getty Images)

Cuomo has formally referred the case of his alleged sexual harassment involving the aides to the attorney general, a necessary step for an investigation to begin.

The referral also allows James to deputize an outside law firm to ensure a ‘rigorous and independent investigation’.

Of the investigation, James said: ‘This is not a responsibility we take lightly, as allegations of sexual harassment should always be taken seriously.

‘As the letter states, at the close of the review, the findings will be disclosed in a public report.’

The attorney general’s office has read Anna Ruch’s account in The New York Times and will decide whether to incorporate it into the investigation.

On Sunday, Cuomo acknowledged for the first time that some of his behavior with women ‘may have been insensitive or too personal’ and pledged to cooperate with the investigation.

In a statement released amid mounting criticism, Cuomo stated he had never inappropriately touched anyone. But he did say he had teased people about their personal lives in an attempt to be ‘playful’.

His statement said: ‘I now understand that my interactions may have been insensitive or too personal and that some of my comments, given my position, made others feel in ways I never intended. 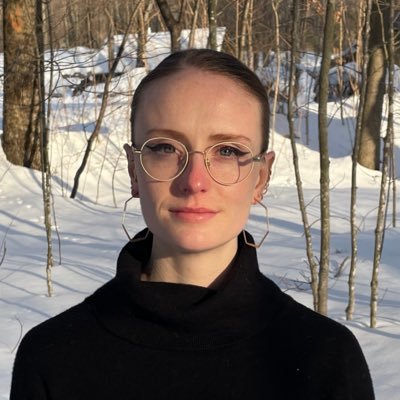 Charlotte Bennett is one of three women to speak out (Picture: _char_bennett_/Twitter) 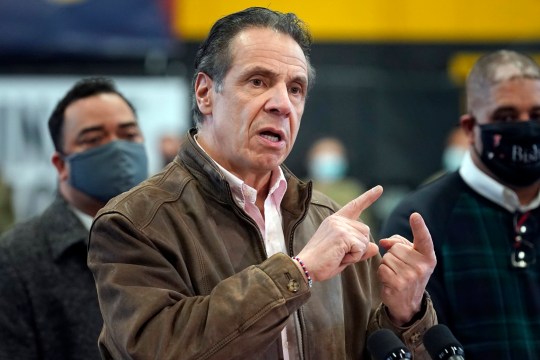 Andrew Cuomo referred to his behavior around women as ‘playful’ (Picture: AP)

‘I acknowledge some of the things I have said have been misinterpreted as an unwanted flirtation. To the extent anyone felt that way, I am truly sorry about that.’

Meanwhile, New York City mayor, Bill De Blasio, who has a testy relationship with Cuomo, said ‘There has to be some decency here, if these allegations are proved to be true’, speaking of the claims against Cuomo.

He added: ‘It’s true as I believe then the governor becomes invalidated and you know this is a choice he has to make. If you don’t have the trust of the people anymore, if you can’t look people in the eye, what do you do?’

Representative Kathleen Rice appears to be the first New York Democrat in Congress now calling on Cuomo to resign.

Cuomo shot to global fame after using his devolved powers to tackle the Covid outbreak across the Empire State.

His tough lockdown measures helped turn New York from the global epicenter of the crisis to a state that has kept the pandemic under control for months, despite being home to New York City – America’s most populous city.

But Cuomo was accused of letting his ego get out of control after publishing a book detailing his handling of the crisis last October, despite warnings that it was far from over.

He could also face a separate investigation for forcing nursing homes to accept untested hospital patients.

That measure was blamed for causing the virus to spread like wildfire among frail elderly residents, resulting in thousands of deaths.

Cuomo allegedly withheld data about the true number of deaths to try and fend off a probe by then-President Donald Trump.

New York has the second-highest Covid death toll in the US – 47,247 people. Only California – which is home to twice as many people as New York – suffered more, with 52,487 deaths.