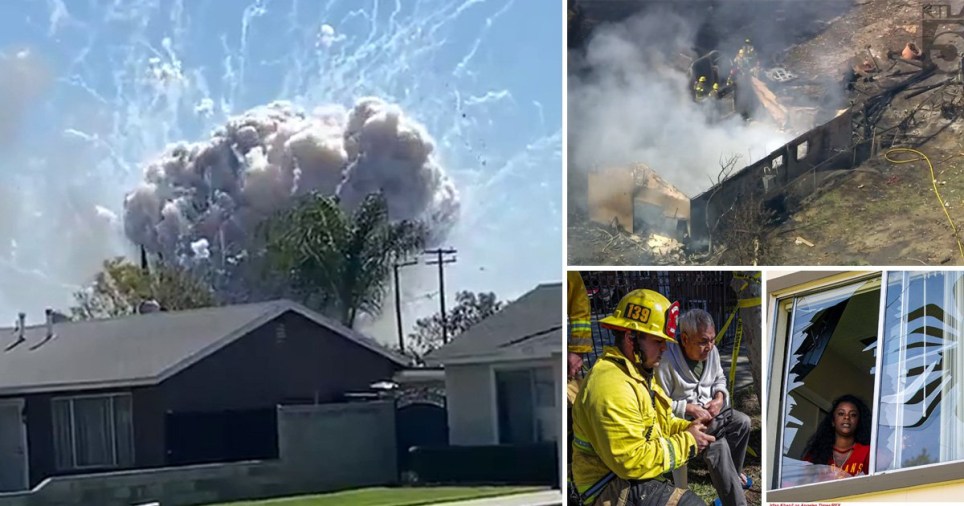 The explosion shattered windows and left residents ‘running for their lives’ (Picture: @Prudencepms/KTLA/Rex)

Two people have been killed in California after a series of major explosions involving a large stash of fireworks.

The blasts at a home in the south of the American state on Tuesday shattered windows across a residential neighbourhood and sent up a huge plume of smoke.

The FBI and other authorities are investigating the explosion of what were believed to be commercial-grade fireworks in Ontario, about 35 miles east of Los Angeles.

About 50 firefighters were still battling the flames three hours after the initial blast, while residents told of ‘running for their lives’ and shaking houses amid the chaos. At least three other people are reported to have had minor injuries.

Video footage showed smoke billowing into the air after the initial blast, and fireworks can be seen and heard going off.

Fireworks are illegal in Ontario and many other Californian cities.

Ontario Police Chief Mike Lorenz said officers have been called to the area in the past following reports of fireworks being set off, while residents said they were aware that fireworks were being kept in the property.

Officials did not immediately say where the cache in the explosion came from, or what was happening in the home where the blasts erupted.

But he said the two people who were killed appeared to be inside or around the home.

Mr Gayk added that three other people had minor injuries and weren’t hospitalised.

Steve Bailey, who lives nearby, said his whole house shook from the initial explosion. 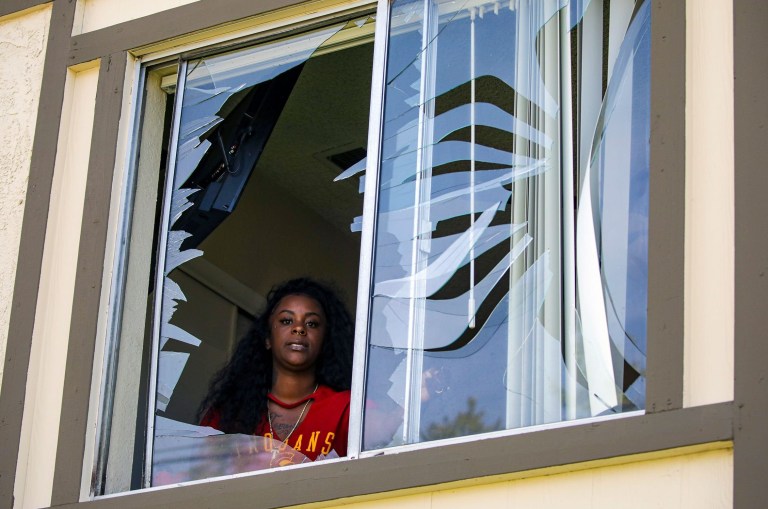 Tametra Shaw seen through a window of her apartment shattered in the explosion (Picture: Irfan Khan/Los Angeles Times/REX) 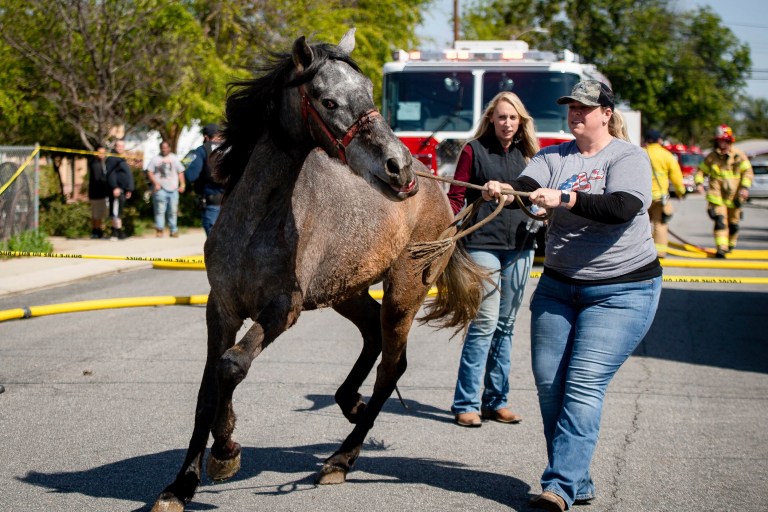 Animal rescue volunteers help a horse escape from the back of the home where an explosion took place (Picture: AP)

’It felt like something hit the roof, or a car crashed into the house,’ he told ABC 7.

Footage on US TV showed at least one home burning and a shed and scattered debris on fire in a large backyard.

Another neighbour, Arlene Fiero, claimed her leg had caught fire.

She told KCBS-TV. ‘Part of my house fell on me, part of the door and part of the wall, it just collapsed from the explosion.’

Other people nearby were able to escape, authorities said. 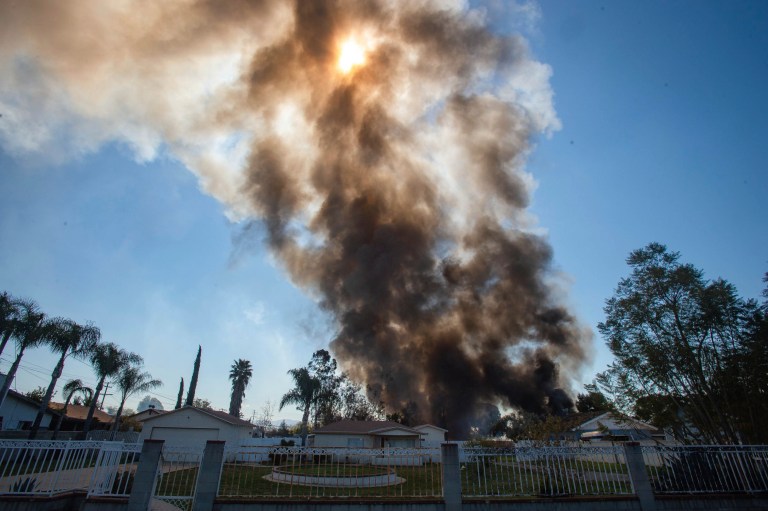 Smoke obscures the blue skies in the area (Picture: AP) 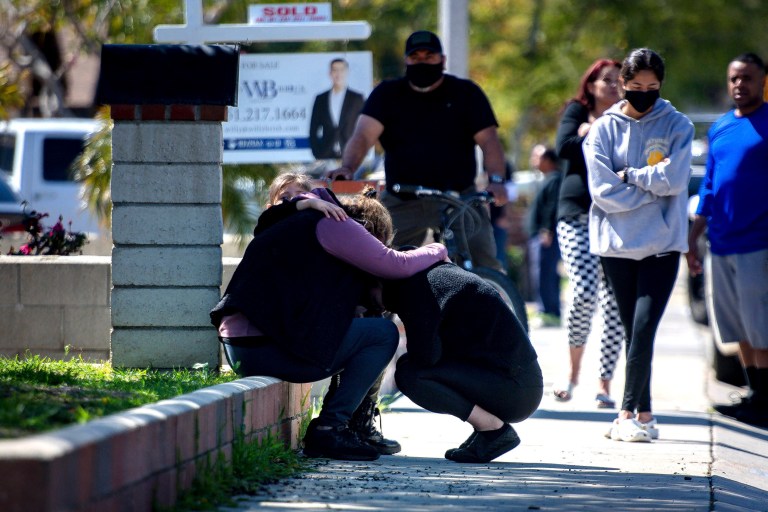 Grieving family members comfort one another after the incident (Picture: AP) 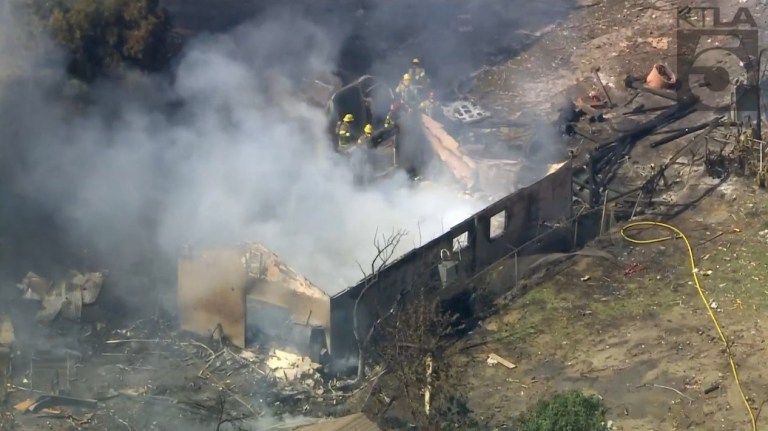 Oscar Vargas Ibarra, 17, who lives two houses from explosion site, told the Los Angeles Times that when the first blast hit, they grabbed their dog and bolted into the street.

Then there was a second, larger explosion and ‘that’s when everyone ran, ran for their lives,’ he said.

The teenager said he knew people living at the destroyed home had fireworks, although he didn’t know how many.

He said: ‘They always pop them off, random sometimes, like at night shows or a holiday.’ 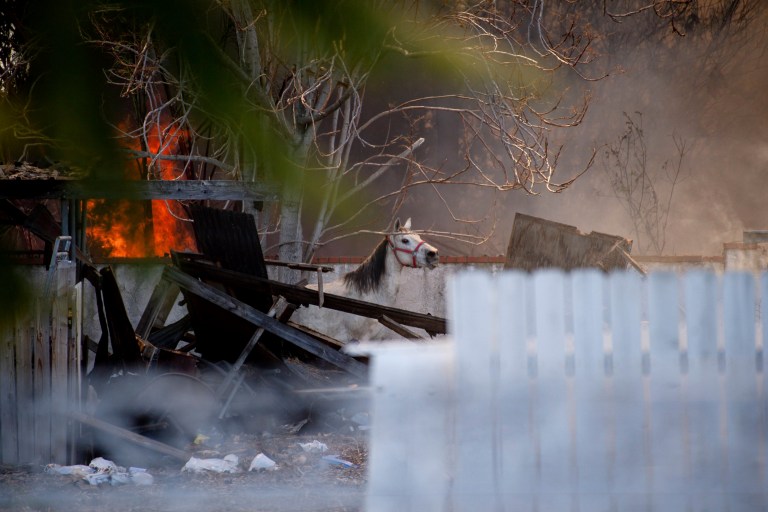 A horse stands in the back of a home where the explosion took place (Picture: AP) 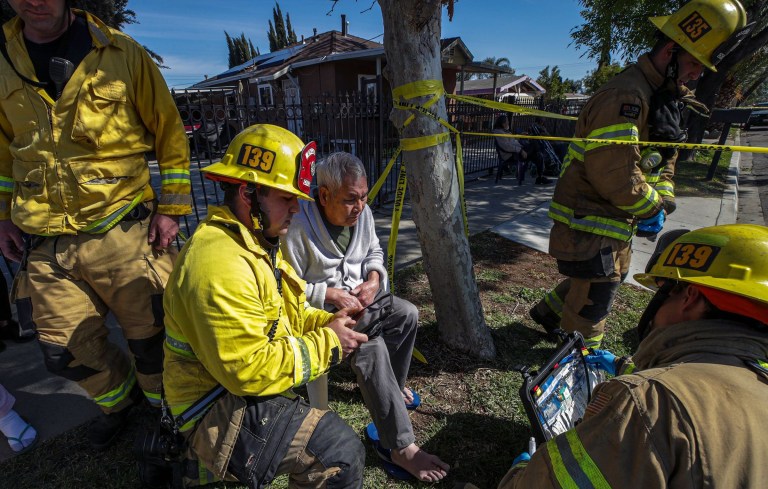 Ontario fire fighters treat David Nguyen, 72, whose foot was slightly injured as he rushed out of his home (Picture: Irfan Khan/Los Angeles Times/REX)

Firefighters managed to free a horse on the property that was trapped against a fence near a pile of burning debris. Another horse managed to escape unharmed.

Several locals said windows at their homes were shattered by the initial blast.

Hours later, several smaller blasts went off, apparently from remaining fireworks, and a new plume of smoke rose from the area.

People nearby were evacuated for at least the night or until the area is declared safe, fire officials said.

How to get a great night’s sleep, according to the experts