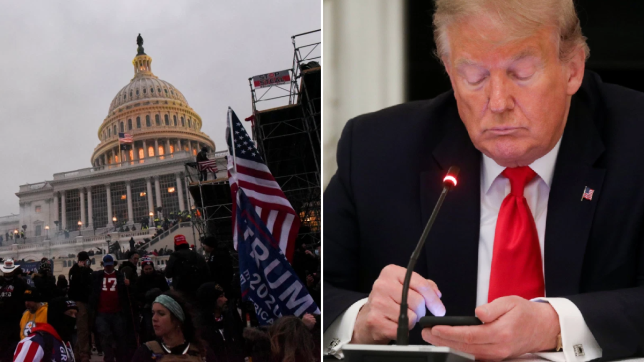 Twitter is refusing to allow former President Donald Trump’s old tweets from his permanently suspended account to live on as an archive on its platform.

The social media giant is working with the National Archives and Records Administration (NARA) on preserving Trump’s tweets as has been done with the accounts of other ex-government officials. But tweets from @realDonaldTrump will not go live on Twitter as other archived accounts have.

‘Given that we permanently suspended @realDonaldTrump, the content from the account will not appear on Twitter as it did previously or as archived administration accounts do currently, regardless of how NARA decides to display the data it has preserved’, a Twitter spokesperson told The Hill on Wednesday. ‘Administration accounts that are archived on the service are accounts that were not in violation of the Twitter Rules’.

Twitter permanently suspended Trump’s personal account two days after the January 6 riot in which thousands of his supporters stormed the Capitol building to try to stop Congress from certifying President Joe Biden’s victory. Twitter determined that two of Trump’s tweets violated its Glorification of Violence policy. In tweets and at a rally, Trump encouraged his followers to fight the election results.

The National Archives’ Public and Media Communications indicated that it plans to preserve all presidential records on social media including tweets that have been deleted or blocked. However, Twitter is ‘solely responsible’ for the decision of whether it will make the tweets available on its platform, it stated.

‘NARA works closely with Twitter and other social media platforms to maintain archived social accounts from each presidential administration, but ultimately the platform owners can decline to host these accounts’, it stated to The Hill. ‘NARA preserves platform independent copies of social media records and is working to make that content available to the public’.

Trump’s official Twitter account has been archived as @POTUS45, as have former First Lady Melania Trump’s as @FLOTUS45 and former Vice President Mike Pence’s as @VP45.