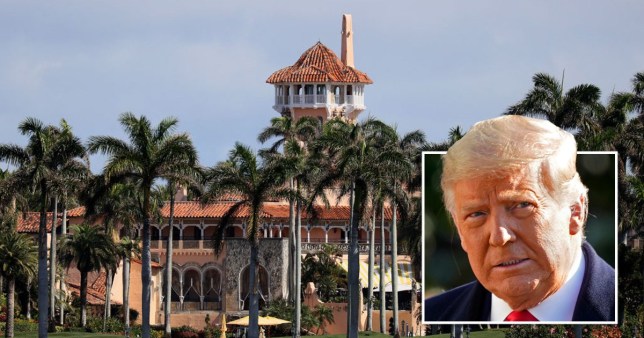 The club has previously come under fire for not enforcing mask-wearing (Picture: Getty Images/AP)

The resort where Donald Trump lives has been partially closed after a ‘coronavirus outbreak’ among staff.

The former US president has spent most of his time at the resort since leaving office in January.

News of staff testing positive for Covid came to light in an email seen by The Washington Post.

Management is reported to have written to members on Friday saying: ‘As some of our staff have recently tested positive for COVID-19, we will be temporarily suspending service at the Beach Club and à la carte Dining Room.’

The Trump Organization would not say how many employees were infected but confirmed parts of the club were closed ‘for a short period of time…out of an abundance of caution’.

The club has previously come under fire for not enforcing mask-wearing while hosting large events, including charity fundraisers.

Mar-a-Lago is a club. A club is a business. Businesses must abide by Palm Beach County’s mask order, or be fined or even shut down. We knew that Trump was hosting a New Year’s party. I’ll be reaching out to folks at @pbcgov to ask why we weren’t ready to enforce the mandate here. https://t.co/2HtJEXiBcE

Palm Beach County sent Mar-a-Lago a formal warning letter and threatened fines of up to $15,000 after footage emerged showing maskless guests at a New Year’s Eve party in January.

Trump caught the virus last October and recovered after several days of hospital treatment. He was vaccinated in January.

Mar-a-Lago is planning to host Republican National Committee spring retreat events next month, according to The New York Times.

Metro.co.uk has also contacted the Trump Organization for comment.

SNT and SM:TV fans nostalgic as Cat Deeley reunites with Ant and Dec