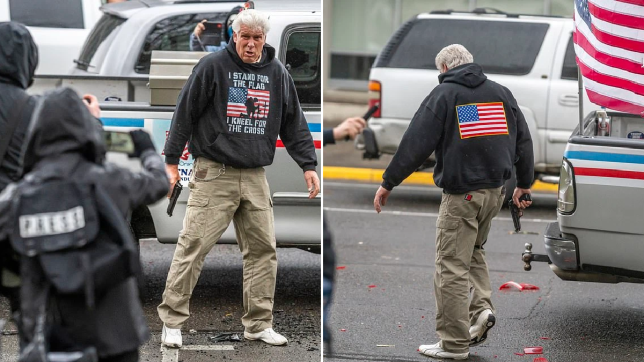 A Trump supporter pulled his gun on Antifa protesters after being maced at a rally near the Oregon Capitol (Pictures: Getty Images)

A supporter of former President Donald Trump pulled his gun on Antifa protesters who threw rocks, maced him and vandalized his truck at a rally on Sunday. Video footage showed the man getting out of his vehicle after demonstrators smashed the tail lights and sprayed paint on his windshield.

Protesters appeared to mace the man, prompting him to take a gun out of his waistband, load it and shout, ‘Get away from me.’

Police quickly arrived at the scene near the Oregon Capitol and a cop demanded, ‘Put the gun down right now.’ The man, who had American flags on his sweater and vehicle, immediately placed the gun on the back of his truck, put his hands up and got down on his knees.

The cop directed the man to lay on his stomach on the ground, while telling angry protesters to back off. The man did not resist authorities and did as told.

A protester could be heard yelling, ‘Shouldn’t be pulling a gun out.’ Another said, ‘He loaded it too, he loaded too,’ and, ‘It’s a loaded gun. It’s loaded. Damn pointed it at us.’

The unidentified man was a Trump supporter, the Daily Mail reported. He was arrested but not immediately charged, according to police. At least three other arrests were made.

During the man’s arrest, a protester shouted, ‘F*** the Proud Boys,’ referring to the far-right, neo-fascist male white nationalist organization.

The Antifa is a left-wing, anti-fascist and anti-racist movement that Trump blamed for violence at protests over police killing black people.

Left-wing, anti-fascist protesters and right-wing demonstrators clashed near the capitol during the ‘Freedom’ rally in Salem that was billed as an event honoring people who ‘fought for our freedoms.’

Protesters launched objects at passing cars donning American flags and broke windows of vehicles. Police had tweeted that they expected 150 to 200 ‘heavily armed’ protesters and reported that cars were being hit with paint-filled balloons and green lasers.

We Are FSTVL announces 2021 line-up, features Carl Cox, The Blessed Madonna and more