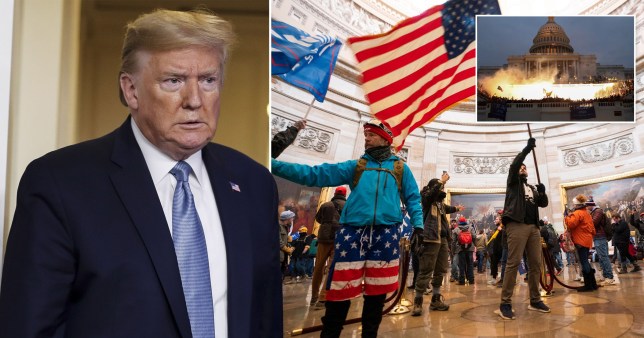 Donald Trump has formally denied inciting the January 6 US Capitol riots, and claims his speech to supporters hours beforehand was covered by freedom of speech laws (Pictures: AP)

Donald Trump’s impeachment defense team deny he incited the deadly US Capitol riots, and say his words to supporters are covered by free speech laws. The former president’s legal team outlined the arguments they intend to present at the former president’s February 8 trial on Tuesday in a 14 page filing.

Trump’s lawyers Bruce Castor and David Schoen say Trump’s words to supporters on January 6 – ‘if you don’t fight like hell, you won’t have a country anymore’ were perfectly legal because of the US Constitutions First Amendment right to free speech.

They added that Trump’s warning – made hours before the Washington DC riots that killed five – were not referring to violent direct action.

Trump’s lawyers insist he was speaking ‘about the need to fight for election security in general,’ having called the rally to make his oft-repeated claim about Joe Biden stealing the election result. 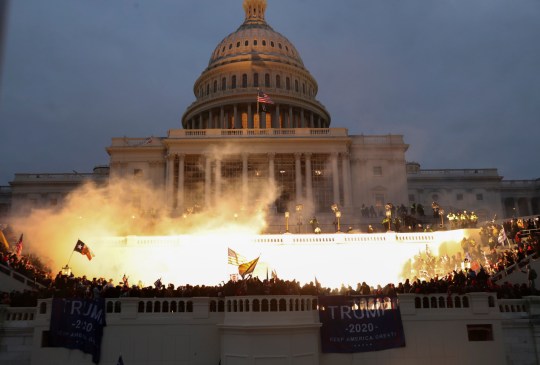 Rioters descended on the Capitol on January 6 hours after President Trump attended a rally and urged them to protest against the certification of Joe Biden’s election win (Picture: Reuters)

The filing added: ‘It is denied that President Trump incited the crowd to engage in destructive behavior.’ Castor and Schoen also argue that it is unconstitutional to hold an impeachment trial for Trump, because he has left office.

But former Secretary of War William Belknap was successfully impeached and tried even after suddenly resigning from office in 1876.

He was later acquitted, setting a precedent that those who wish to convict Trump say still stands today.

Democrats in the House of Representatives have also filed their framework arguments, insisting that Trump is guilty of the charge he faces.

Impeachment manager Jamie Raskin wrote: ‘President Trump has demonstrated beyond doubt that he will resort to any method to maintain or reassert his grip on power.

‘A president who violently attacks the democratic process has no right to participate in it.’

At least six rioters arrested and charged following the Capitol incident have said they were only doing what Trump told them to.

The president called on supporters to descend on the seat of the US government to protest at the certification of Joe Biden’s win, which was overseen by former Vice President Mike Pence.

Impeachment managers from the lower chamber of the US Congress, the House of Representatives, will argue the case against Trump before the upper chamber, the Senate.

Senators will then vote on whether to acquit or convict Trump. Democrats have a one-vote majority in the Senate, but a conviction can only be secured if two thirds of the chamber’s 100 senators vote to do so.

So far, just five Republicans have signaled plans to side with the Democrats, with 12 more needed to secure that conviction.

If convicted, Trump will be banned from running for office again in 2024.

Georgia Steel signs up for Ex On The Beach