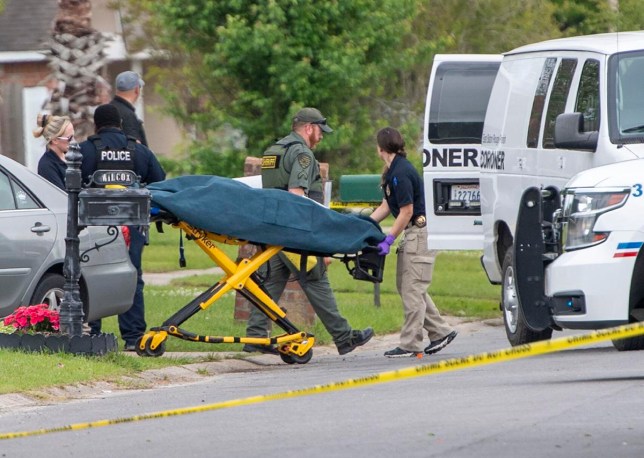 A three-year-old boy got his hands on a gun while his father was making lunch and fatally shot himself (Picture: The Advocate)

A three-year-old boy reportedly got his hands on a gun while his father was making lunch and fatally shot himself. The toddler was pronounced dead by medics who responded to the home in Baker, a small city in Louisiana.

‘This appears to be a tragic accident’, Baker Police Chief Carl Dunn said at the scene after the incident on Wednesday, according to The Advocate. ‘Little boys and girls are curious, and tragic things like this can happen’.

The boy’s father was taken into custody for questioning. He was the only adult at the home at the time and was in a different room cooking, Dunn said. Two other children were in the house and were not injured.

Dunn said the weapon was a semiautomatic pistol. He did not provide additional details on how the accidental shooting occurred or the number of shots that were fired. It was not known whether the other children were playing with the gun before the tragic shot.

The father had recently bought the gun to protect the household from burglars that could break in, his cousin Kedron Haynes told the newspaper. The cousins spent time recording music in the garage of the home on Breckenridge Drive and the father was worried about protecting the home due to the recording equipment, Haynes said.

‘With the snap of a finger, you turn your head one time and anything can happen’, Haynes said. ‘With this situation, it hurts’.

Haynes described the three-year-old boy as curious, active, nosy and interested in learning new words. He had a younger brother and an older brother.

It was not immediately clear if the father would face charges. Local law enforcement officials typically do not pursue charges against adults in such cases unless they have reason to believe that guns were not properly stored with children in the vicinity.

Dunn said accidental shootings by children are preventable and that the police department provides and delivers free gun locks to anyone in need.

‘I believe in gun ownership. I grew up hunting and fishing’, Dunn said. ‘But as parents, we need to be responsible… Please, please make your house as safe as possible’.