The boom, which echoed for blocks in the tourist-filled area, had many in a panic, running away from the blast. It happened around 6.45 pm on West 43rd Street near Seventh Avenue.

Crews also discovered elevated carbon monoxide levels on that same block, including inside an office building.

The situation was turned over to utility crews several hours after the explosion, the FDNY said. Utility company Con Edison says a power cable failure led to an explosion and fire in a manhole. As firefighters worked to put out the fire, dark gray smoke came from the three manholes and flooded into the streets. 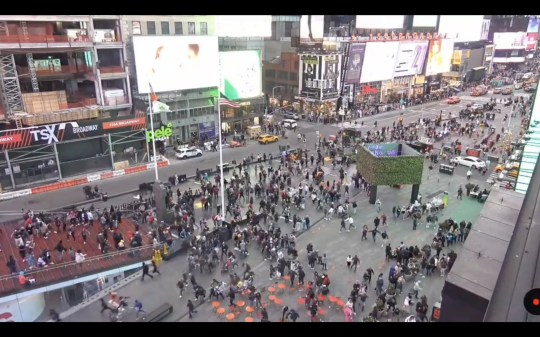 ‘One manhole exploded in the Times Square area this evening due to cable failure, and a second manhole was smoking. At this time, there have been no customer outages, and no reports of injuries or property damage. Our crews remain on location,’ a spokesperson for Con Ed said on Sunday.

Video of the incident taken from EarthCam shows the moment swarms of people suddenly running away from the popular tourist destination.

‘Once I seen the fire, the cops are telling me to back up. I slowly start backing up, but still I started, like, then again, I started proceeding, like, to the fire and then it actually exploded right in front of me and that’s when I was just, like, I started running,’ one witness, Lavier Pounds, told CBS New York.

Other videos taken by people there show looks of terror as people take off, trying to get away from the source of the loud blasts.

One person who witnessed the explosion shared a video capturing the scene, noting that a lot of people seemed to be ‘on edge’ following the loud bangs.

Firefighters evacuated people in the area as a precaution.

No injuries were reported from the incident.

Times Square and the surrounding neighborhoods have seen an uptick in crime since the start of the year.

In January, a 40-year-old woman was pushed to her death while waiting for a subway in the popular tourist destination.

Michelle Go, who lived and worked in New York City, was shoved to her death while waiting for the subway at Times Square.

According to police, Martial Simon approached Go from behind as she waited to board an R train and pushed her into the path of the oncoming train.

Martial, who is believed to be homeless, fled the scene but later turned himself in at a police station. Martial had a warrant out for parole violation and two prior violent felony convictions.